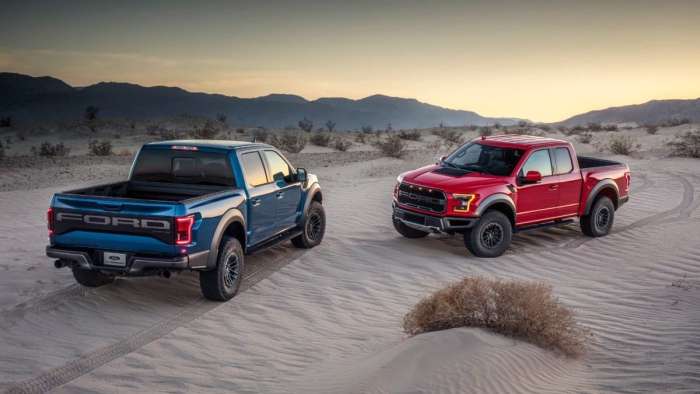 The way prices are going in the pickup market, it won't be long until we see F150 and Silverado prices in the $100K range.
Advertisement

Have you taken a look at the price of pickups lately? Some price tags are rolling rapidly toward six figures with others not far behind. Can you imagine a pickup with a $100K price? Of course, dealers can do more than imagine because, the Detroit Bureau noted, trucks are where they earn the big bucks. It’s true that even as luxury sedan business has tanked over the last three years truck business – pickups and large SUVs – have not only picked up the slack but have improved on it.

Pickup prices are heading through the roof. Indeed, it’s not hard to consider a luxury pickup having a cost of $100K or more. “Pickup trucks are the profitable bread and butter of Ford, Fiat Chrysler Autos (FCA), and Chevy,” Anthony Alaniz, associate editor of Motor1.com has written. “And it appears Chevy has its pulse on what future truck buyers want – a $100,000 luxury-oriented pickup truck.” To be fair, some Fords are going up in price, some of them not even that new Pickup Prices Aren't The Only Prices Heading Up.

Chevy’s Sandor Piszar told The Detroit Bureau, where the story first appeared this weekend, that “people want to trade up.” He noted that Chevy is ready to deliver a more expensive pickup if customers want it. But, he refused to indicate whether the automaker has a $100K pickup in development. It’s Chevy’s policy not to discuss future products. Piszar was also quick to add that Chevy wants to provide the vehicles truck buyers are demanding.

It’s funny, too, because you would think that with customers paying luxury car prices for their pickups that they would demand similarly equipped pickups. The truth is that they don’t., that they would demand pickups with similar standard features, but they are not. Indeed, while the idea of a $100K Silverado seems crazy, even those that are less expensive seldom are equipped like a luxury sedan or a crossover.

That picture is changing as Chevy is adding content to its Silverado and Silverado HD lines. It is also improving not only interior materials but also the overall fit and finish of the pickups. And, Chevy is also expanding trim levels and engine choices, as well.

And, while it may seem as if $100K might be a limit on pickup prices, it only seems to be a way-station on the Pickup Express. Indeed, there are also some larger pickups already priced at nearly $100K with more ready to join them at that pricing point. The Ford F250 Limited is reportedly one of the bigger pickups that is nearly at $100K, now. It’s all a matter of perception; it seems. With people already spending huge sums on SUVs and crossovers, it is tough to see why automakers can’t price their pickups at $100K. Indeed, if Chevy or Ford wanted to option pickups with the latest in safety and leading edge of technology, power the vehicle with a hybrid powertrain and put in such other features as reclining rear seats, and more, and then charge what you might expect to pay for a Porsche Taycan , there would be enthusiastic buyers, lining up. With F150 and Silverado prices rising to new heights, it makes sense to protect the vehicle With Pickup Prices Heading Up, You Have To Protect Your Truck.

But, what would happen when it was time for customers who bought these super-sized and priced pickups, Chevy or Ford would have to develop even more expensive versions so that buyers could trade up to them. Imagine a $150K F150 or Silverado 1500. Right now, if this figure seems improbable, all you would have to do is wait a few years until folks were ready to trade out of their $100K versions, and the new even more expensive versions would be there.

If you would like to comment on this story, please feel free to enter any comments in the spaces below the story. Marc does answer every comment or question submitted.