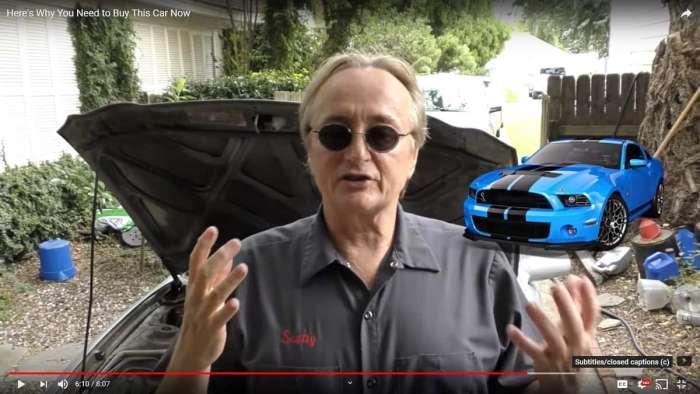 Shelby died a few weeks before they released it. So he'll never have anything to do with any of the new Shelby gt500.

I am thinking historically that's going to mean something and the value of this car will go up because it's a classic. It's a v8 with a six-speed standard transmission, which Americans love. It put out like 667 horsepower, and can actually go 200 miles an hour. Now, a lot of people argued the 200 mph. I have seen one go 200 miles an hour, so I know the 2013 Shelby GT500 can go 200 miles an hour: at least the stock one, which I had for a week.

I liked the that I road-tested for a week because it didn't even have a front grille. It just had a hole because Ford figured they needed that much air to flow in to cool the engine and such air into the engine so it could get enough air, burn it fast enough to go 200 miles an hour.

It takes something, to go 200 miles an hour.

So, even thought there is still a lot of money, for a car that can go that fast, it was pretty much a bargain.

I believe really that they are starting to appreciate more in value. I just saw one that was sold for $63,700, which is pretty much the original price of the car. You try finding a 7 year old car that you can sell it for the same price that you bought it for.

It's going to be a rarity, but I believe overtime the 2013 Shelby GT500 will keep appreciating in value because it's the last one Carroll Shelby had anything to do with. And they are re really fast cars. A lot of them are destroyed, wrapped around telephone poles, or rolled over.

By the process of attrition as time goes on there going to be less and less of them still rolling down the road.

After all they only made 4,885 of these things. There weren't that many to begin with.

I am sure they are going to appreciate in value as there will be less and less of them left when.

When it comes to the value of cars and most other commodities, it's more the rarity that makes them worth something. Yes, they have got to have a reason why, but it all comes down to numbers eventually.

So, realize that if you own a car and the manufacturer made 500,000 of them, it's probably never going to be worth much money. It will depreciate. And if it's a good car like the Celica, hey, keep riving the thing around and have fun with it. Just don't think that it is going to be worth a king's ransom one day like the 2013 Shelby GT500.

Watch how to remove car wrap from a Ford Mustang GT and subscribe to Torque News Youtube Channel for daily news on Ford and automotive industry.

See you in the next story in which I discuss this interesting video story about using the Tesla Model 3 in tight garages and parking spaces not only forward, but also backward.