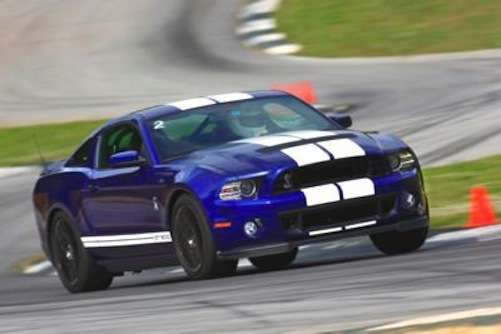 Steve Turner, editor-in-chief of 5.0 Mustang & Super Fords magazine, put a 2013 Ford Shelby GT500 on a dyno and got some amazing results.
Advertisement

At the press launch for the 2013 Ford Shelby GT500 last week in Braselton Georgia, Steve Turner, editor-in-chief of 5.0 Mustang & Super Fords magazine, wanted to run his own dyno test to see just how much horsepower the new muscle car has, and was able to sneak one of the cars away for a quick test. Apparently even after driving one of the super fast Shelby GT500‘s, he needed to see for himself if Ford’s claims were true.

As we reported here on Torque News, just a month ago, Ford announced that the 2013 Ford Shelby GT500 had been officially SAE certified with 662 horsepower and 631 lb. ft. of torque. This was a dramatic increase over the incredible 650 horsepower that Ford had announced back in November of last year. This made the new aluminum block 5.8-liter the most powerful production V-8 in North America. However, as reported by Mustangs Daily, those numbers may not even be an accurate representation of what kind of horsepower the 2013 Ford Shelby GT500 is pumping out.

In between laps at the Road Atlanta track and making quarter mile passes at Atlanta Dragway, Turner took one of the new Shelby GT500’s and put the car on the dyno for a quick test. After getting the car up over 6000 rpm’s Turner found that the 2013 Shelby GT500 was putting out 609 horsepower at the rear wheels.

But when you factor in a typical 10-20 percent loss through the transmission, driveshaft, and differential, with a 15 percent loss, the supercharged 5.8-liter V-8 is actually producing closer to 715 horsepower at the flywheel. With a more conservative drivetrain loss of ten percent, the muscle car is pumping out more than 675 horsepower, which is still more than the SAE certified number.

As is typical with most car manufacturers, they report horsepower and torque numbers that are generated at the flywheel and not the rear wheels. So it isn’t uncommon to see horsepower and torque be more on a dyno than what the carmaker is advertising. But what this does show is that Ford has done an incredible job of updating everything in the drivetrain to make the 2013 Shelby GT500 more powerful and efficient.

Ford upgraded ever part of the powertrain

Ford engineers looked at every part of the powertrain when they designed the new car, starting with a larger and more efficient supercharger which forces more air into the 5.8-liter V-8. Next they focused on the internals giving the V-8 new cross-drilled block and heads, an all-forged engine rotating assembly, updated camshaft profiles, and upgraded head gaskets. In order to reduce friction through the drivetrain, they gave the new Shelby a new carbon fiber driveshaft, an upgraded clutch, transmission and axle. The results of all the changes made to the 2013 Ford Shelby GT500 are truly spectacular.

Anonymous wrote on May 22, 2012 - 1:17pm Permalink
Everyone quotes flywheel horsepower numbers this way,but I believe the logic is flawed. Drivetrain loss is a static number. Assume a 300 horsepower car measuring 240 at the rear wheels. It's a 20% loss, but it will always be a static 60 horsepower loss. Add a supercharger to that car and double flywheel horsepower to 600. One would expect to measure 540 at the wheels. Losses will not change. The precentage will, naturally, because it's a percentage of a larger number. Look at it the other way - If one is assuming 715 flywheel horsepower and measures 609 at the wheels, that's a 106 horsepower loss through the drivetrain, a ridiculously high number.
Anonymous wrote on May 23, 2012 - 11:08am Permalink
^^^ WHAT??? please do you homework before posting false information for people to read and think might be correct. From what the motor puts out at the flywheel vs rear wheel hp can change with something as little as trans/differential fluid. Plus automatics have more drivetrain loss than manuals there for this isnt a set static number!! Swap out the carbon fiber drive shaft for a steel or even aluminum and the rwhp will be lower. Ford claims 662hp at the flywheel... 5.0& Super fords showed 609rwhp... thats a 8% drop to get the power to the ground... This is highly unlikely hence thats why they stated "with a 15 percent loss, the supercharged 5.8-liter V-8 is actually producing closer to 715 horsepower at the flywheel". If you look at rear wheel drive manual transmission vehicle this will mostly be linearly across the board. The more power you make... the more you loose getting it to the ground!!
Anonymous wrote on May 23, 2012 - 3:26pm Permalink
You certainly read a lot of things into what I wrote. Of course changing any driveline component, especially switching from and automatic to a manual, will change the amount of driveline loss. That has nothing to do with what we are talking about here. In my example the only thing that changed was the engine horsepower. I, in no way, suggested that driveline losses were ONE set number for every vehicle. As for an 8% loss being unlikely, please explain why. It's a 53 horsepower loss. That seems reasonable. The percentage is meaningless. As for your suggestion that making more power means losing more, please explain that in engineering terms so we are speaking the same language. The driveline is going to have losses due to rotational mass, friction, viscosity, etc. Nothing from the flywheel back to the rear tires knows or cares what is driving it. If it takes 50 horsepower to overcome the losses, why would that change by bolting up a more powerful engine?
Anonymous wrote on May 23, 2012 - 10:07pm Permalink
oh yea 715 flywh hp ,50 state emissions legal and no gasguzzler tax from 5.8L [AWESOME]