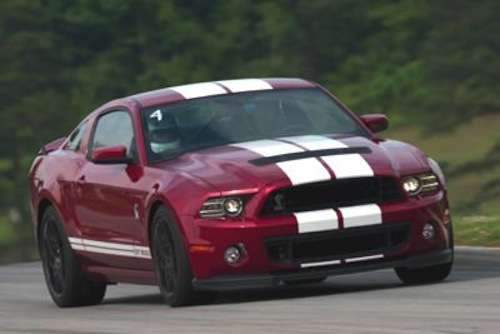 Carroll Shelby in possibly his last video with the SVT team, talks about durability of the 2013 Ford Shelby GT500.
Advertisement

Last October, Carroll Shelby and the Ford SVT team took the 2013 Ford Shelby GT500 out to Sebring International Raceway to test the durability of the supercar. Shelby, along with Gene Martindale, Lead Development Engineer, and Eric Zinkosky, Vehicle Dynamics Supervisor, talk about the durability of the 2013 Shelby GT500 in the last video that Shelby made with the team.

Shelby and the SVT team took the 2013 Ford Shelby GT500 to the Sebring International Raceway because it is one of the most brutal circuits in America. The track is located in central Florida and has an incredible racing history. It is the oldest permanent road racing track in North America, evolving from a World War II air base. Sebring is world famous for the annual 12 Hours of Sebring endurance race and is owned by the Panoz Motorsports Group, whose founder Dr. Don Panoz revived the famous Sebring circuit in 1999. The track is active 365 days a year with automotive testing, club events, racing schools, corporate events and other activities.

Gene Martindale, Lead Development Engineer, said, “if the car can survive here, it can pretty much survive anywhere.” Carroll Shelby raced at this track for years and was at the track on October 17th through October 19th, 2011 for the three days of durability testing. He was also available for the whole process of vehicle development as he was for every car that bore his name. “He is more than a guy with his name on the car”, said Martindale. “ Carroll Shelby is our inspiration, he is our spiritual leader.”

Carroll Shelby gets his start with Ford

When Shelby first started his partnership with Ford, he asked them for $25,000 and told them he could build a car that would “kick the heck out of the Corvettes.” And as it turned out, he was able to even beat Ferrari with the cars he developed early on. Shelby wasn’t an engineer, but he knew each car by feel. Shelby had to put his stamp of approval on every Ford Shelby vehicle before he would let it be released for sale.

At Sebring International Raceway, the SVT team put the 2013 Shelby GT500 through severe testing. They tested everything on the supercar at the 3.7 mile track. They gave the Shelby GT500 all it could stand back in October, and the team said the car performed like “clockwork.” Carroll Shelby wanted the average working guy to be able to buy the cars that he developed and was proud of the fact the 2013 Ford Shelby GT500 would cost $100,000 less than similarly equipped performance sports cars.

Carroll Shelby on October 19, 2011, told the SVT team, that the 2013 Ford Shelby GT500 was “100 percent.” Shelby was proud to put his name on the last car that he would be involved with before his death. He said, “you’ve made it the best and more.” Now, Carroll Shelby the legend, also has a street named after him near the race track. “Carroll Shelby Drive.”

In a last tribute to Carroll Shelby, the SVT team wrote these words to honor their inspirational leader. “ We are fortunate to have Carroll Shelby be hands on and immersed in the development of the new 2013 Shelby GT500 Mustang, as he was with every Shelby Mustang that came before.”

“And while he’s no longer with us, we imagine he’ll be looking over our shoulder inspiring us and driving us in spirit. He was a legend, icon, and more importantly, a friend.”

The legend will be truly missed.

Panasonic Updates Profit Forecast, Noting How Much Tesla Batteries Help The Jump
2022 Porsche 911 GT3 Laps Nurburgring in 7:04 With Journalist Behind The Wheel
END_OF_DOCUMENT_TOKEN_TO_BE_REPLACED