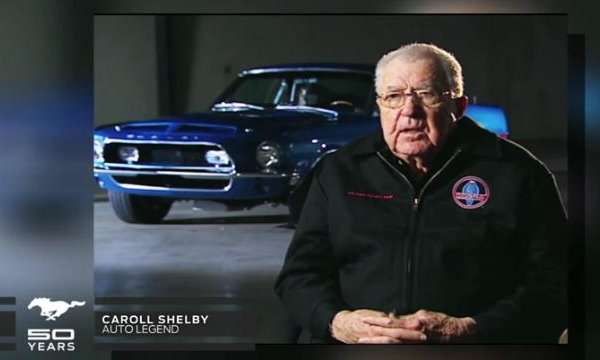 As Ford Motor Company continues to prepare for the launch of the 2015 Mustang, the automaker has offered more historic Mustang information with the latest clip being a piece detailing how Mr. Carroll Shelby first got involved with the Mustang program - and how his input helped to make the Mustang the ultimate performance car.
Advertisement

Shortly after the 1964 Ford Mustang was introduced, Ford boss Lee Iacocca contacted successful racer and race car builder Carroll Shelby and told him that the Motor Company wanted to make the Mustang a race car. Carroll Shelby quickly replied that it couldn’t be a race car because it was “a secretary’s car” – and that he didn’t think that it could be turned into the premise of a race car.

Fortunately for Ford Motor Company, Carroll Shelby was up to the task so he took the new Ford Mustang and started by bumping up the performance into the range of 300-320 horsepower. Next, Shelby added performance spec brakes and suspension components followed by removing some unnecessary weight like the rear seat. Once they had this souped up Mustang, Shelby’s crew couldn’t come to agreement on what to name the high performance sports car. Shelby allegedly instructed his shop foreman to walk from the corner of the building in which they were working to a nearby airport and when the foreman counted out 347 steps – Shelby proclaimed that this high performance Mustang would wear the name GT350.

While it might be a little scathing for Mustang lovers to listen to the man who helped turn the car into a legend repeated refer to the original pony car as a “secretary’s car”, Carroll Shelby’s strict demands on the components that went into the Mustangs that would bear his name played a major part in making the Mustang such a monster in the performance world. Things like the race purposed engine, transmission, suspension , brakes, wheels and tires were all items that drove up the price and upset the “bean counters” but Shelby wouldn’t allow for any cost cutting with the GT350 and later the GT500 and the result is a collection of Mustangs that have become the most sought after, most respected and most collectable cars in the history of the model.

While the Mustang and Shelby name have both evolved a great deal since 1964, who knows what would have come of the secretary’s car without the high performance help of Carroll Shelby and his crew. The video below offers us a quick glimpse into the process of getting Mr. Carroll Shelby involved in turning the Ford Mustang from a secretary’s car into one of the most respected performance cars in the history of the automobile.

While Mr. Shelby passed away over a year ago and rumors suggest that his name might disappear from the dealership-bound Ford Mustang, the Shelby American brand has continued offering some of the highest performance Mustangs available in today’s market. Even if the likes of the Shelby GT500 is discontinued, we can expect that Shelby American will continue offering exclusive, high performance packages for the Ford Mustang for years to come…and all of them will be modified exactly how Mr. Shelby would have demanded.