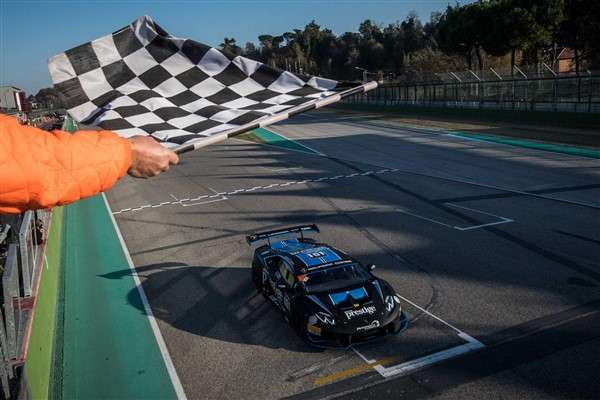 The Super Trofeo racing season came to an exciting end as two qualifiers and a final saw eight different winners. Also, the Lambo Cup winner was announced and the Super Trofeo World Champions made their appearances.
Advertisement

After grabbing the North American Pro title in Lamborghini’s Super Trofeo last weekend, the driving duo of Riccardo Agostini and Trent Hindman stormed to victory in the Lamborghini World Trofeo Final at Imola, Italy Saturday. Agostini and Hindman follow in the footsteps of the 2016 World Champ Dennis Lind.

There were a total of eight winners in this year’s World Final of the Lamborghini Super Trofeo series. The series features a series of contests in North America, Europe, and Asia. The World Final and the two days tune-ups leading to Saturday’s racing occurred at Italy's famed Imola circuit. (It is the only track that can run in traditional clockwork racing, or the direction can be reversed, challenging even the best.)

The weekend’s racing opened with the Pro category going to Agostini and Hindman in Race 1. Though they didn’t finish on the podium, their finish was enough to assure them the overall victory.

In Race 2, Raphael Abbate and Yuki Nemoto took the checkered flag. The pair’s victory was an encore to their win in the last full round of the Super Trofeo Europe. Their success gave them an overall second in the standings. They tied with Patrick Kujala and Richard Antinucci who finished third in Race 2 behind pole-sitter Rik Breukers and co-driver Axcil Jefferies. The series winners in the Super Trofeo Europe included Mikael Grenier and Loris Spinelli. Interestingly, Grenier and Spinelli missed the final battle because they were assessed penalty points for contact with Nicolas Costa in the early laps of the contest.

In the Pro-Am category in Race 2, Nicolas Gornar and Lucas Mauron took the flag in the final. Piscopo and Proto, third behind Niels Lagrange and Pieter Vanneste, were also winners of Race 1. Despite their slippage in the later race, the U.S. racing team managed to win the World Final. The pair were assessed penalty points due to contacts during the race.

Am(ateur) racing is one of four classes

Thanks to their fourth place finish in Race 2, Scholze and Wlazik managed to take the title in the Am race category. The dynamic driving pair, victorious in Race 1 Saturday, saw their results getting better week after week on European tour. They ended up with two wins in the European series. Italian driver Massimo Mantovani eventually managed to win, following an initial crash caused by Ryan Hardwick’s spin. The spin generated three safety periods and a final red flag as track workers worked to clean up debris. With Mantovani taking the top spot on the podium, the Cyril Leimer-Jenny Laurent team followed. Dilanta Malagamuwa was next on the podium.

The Lamborghini racing season was extraordinary. More than 160 drivers participated in three continental series – Europe, Asia, and North America. Also, there was a separate Middle East Championship started last February. Next year’s season promises to be at least as exciting when it kicks off.