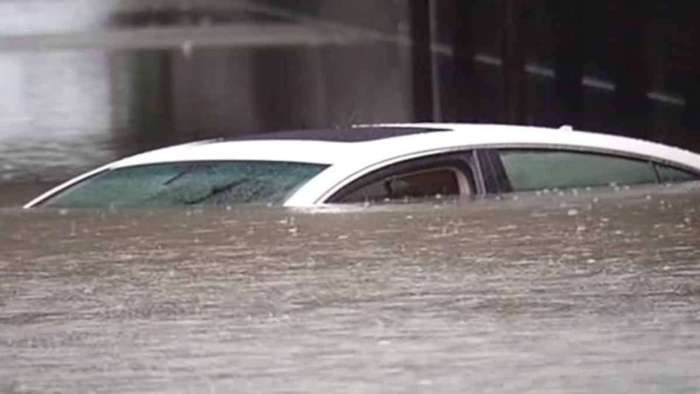 Consumer Reports and Torque News have some good advice for dealing with flood cars in the wake of recent hurricanes and heavy rains.
Advertisement

With Tropical Depression, Nicholas still deluging the Gulf Coast, more cars than ever are in danger of becoming flood vehicles. Flood vehicles are cars and trucks totaled by insurers because of their exposure to flood water. In the first part of this report, Torque News Looks At Flood Cars And Their Problems. It is an in-depth piece.

Consumers would never see them in an ideal world because they have been withdrawn from the market because of flooding. Whether ravaged by saltwater, storm surge, or freshwater, these vehicles should be toast.

Insurers routinely will total them, at which time they become salvage vehicles. Even if you had just purchased your Ford F-150 Lariat, only to have it flooded out by a storm like Hurricanes Ida or Nicholas the very next day, according to the insurance industry, it is a goner.

Honestly, it makes sense. Let's face it, the type of water that inundates it is perhaps the critical factor. A major secondary factor is the toxic soup of chemicals in which the vehicle may sit for days or even weeks. This year it is possible that many of these vehicles have sat for a week or more because of the devastation unleashed by these land-falling tropical systems.

Getting Flood Vehicles Off The Road Imperative

Getting these vehicles off the road is imperative given the soup in which the vehicle has been dunked. They aren't reliable anymore. Indeed, given today's reliance on semiconductor technology and circuit boards, you cannot be sure that if you had decided to contest your insurance company's totaled designation whether even your vehicle would be in good shape. It's best to let go and let the insurance company issue you a check so you can go on and buy another vehicle.

Indeed, trying to dry out a flood-ravaged vehicle, even if it was just dunked into freshwater, is nearly impossible. There are just too many circuit boards, semiconductor chips, and electrical issues to assume that the vehicle is any good. Let's face it, even if the vehicle is dunked in freshwater, the stew of sludge that it faces from its innards alone is impossible.

Vehicles are leaded with refined petroleum products that don't like water very much. They float around on top of the water and coat and recoat every part of the vehicle. And then there are the non-petroleum products like mud, silt, gravel, and dirt. Each of them mixes with the watery stew and manages to leave its mark.

As noted in the first part of this story, sand, dirt, silt, and gravel manages to mix to form quite a mix of nasty stuff that manages to get everywhere. For instance, if the vehicle we are talking about is the new Ford F-150 Lariat 4X4, you will find that the trail of muck and sand will manage to find its way everywhere when you have a chance to look through the vehicle. The engine will be full of the stuff, as will the rear end. Even parts that you don't think will be inundated will be dirty. You will find that closed parts like shock absorbers caked with the muck.

The gunk will fill the exhaust system. The brakes and wheels will likely be filled with the mess. Anywhere the water goes – nothing escapes it – you will find the toxic sludge.

And, no matter what steps have been taken to clean and dry the vehicle – not an inexpensive process – you are guaranteed to miss something. And, even if you are lucky enough to find all of the muck and mire, the damage caused by the corrosive effects of the water on the electrical system will leave things a mess.

Granted, you may be lucky enough to get things dried and cleaned so that even mold deposits may not form. Eventually, the damage will catch up with you and either leave you high and dry in the middle of nowhere or, worse, in a crash.

What happens if you live in a flood-free area and suddenly see a dealer with clean-looking vehicles at reasonable prices? They were cleaned and transported to your area of the country and offered for sale. It's best to give them a pass because the vehicles may have been flooded in another part of the country.

As the editors of Consumer Reports note, "thousand of cars are damaged or destroyed by floods every year, but don't assume all those vehicles end up in a junkyard."

As Torque News and Consumer Reports have noted, some of the vehicles "are repaired and resold in other parts of the country without the buyer being aware of the" vehicle's submerged history. "In fact," says Carfax, a vehicle history, and tracing firm, "there are 378,000 flood cars back on the roads." Carfax also "estimates that as many as 212,000 cars may have been damaged" recently by Hurricane Ida.

The key for shoppers is vigilance "even if you don't live near a traditional storm area," says Consumer Reports (CR). As we have noted, the reason is these vehicles have been transported out of their areas of origin, and they are sold "where consumers may be less aware of the warning signs to look for."

CR notes that water can ruin electronics, lubricants, and mechanical systems. "It may take months or years, but corrosion can find its way to the car's vital electronics, including airbag controllers. Consumers need to carefully inspect any used car before buying one (or pay a mechanic to do it." 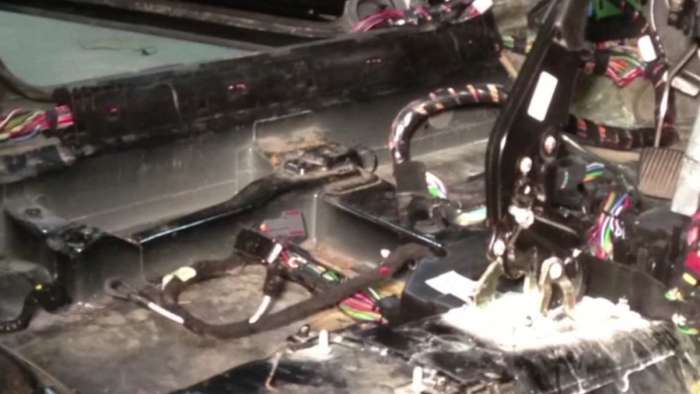 Many times an insurance company will total a flood-ravaged vehicle. It is information that often isn't "communicated to potential buyers." Once a car or truck is totaled, its title is supposed to change to salvage. Salvage titles are "usually plainly marked (known as being "branded") with the word 'salvage' or 'flood.' In some states, the warning is shown on the title as an obscure letter or number code."

Typically, CR notes, totaled vehicles are sold at salvage auctions to junkyards or vehicle rebuilders. They can also be resold to consumers legally "if the flood damage is disclosed on the title." These vehicles can't be "registered until necessary repairs are made, and the vehicle is reinspected." At that time, the vehicle is given a "rebuilt" title which allows "it to be registered for consumer use."

A CR investigation some years ago found that "some flood-damaged vehicles reappear with a clean title." The consumer publication warns that you must be "especially wary" of any used-vehicle "being offered with a 'lost' title or only with a bill of sale."

Online Data Sources You Can Check

CR advises that "one useful online tool for car shoppers is the National Motor Vehicle Title Information System (NMVTIS) which helps consumers run background checks. This system aims to crack down on the practice of 'title washing' when cars have been totaled (or stolen)" so that they can be offered with "new titles in states with lax regulations."

CR also warned that if "the vehicle's owner didn't have comprehensive insurance coverage at the time of the flooding or if the repair bill didn't exceed a certain level, the vehicle might not get a salvage or branded title at all. Indeed, few states offer a 'flood' title that requires a history of any flood damage."

Carfax "offers a free flood damage check in addition to the vehicle history reports it sells. These checks show the 'possibility of flood damage' based on area history and the registered address for the car at the time, and whether the vehicle's title shows a reported flood history."

Another source of information is the National Insurance Crime Bureau which offers "VINCheck, a free service that searches vehicle identification numbers, although it doesn't use as many data sources as some paid providers do."

While these sources are great aids, CR noted that 'ultimately a detailed inspection is a consumer's best protection."

The publication had some great advice on how to spot a flood-damaged vehicle.

Water Damage Often Hard To Find; What To Look For

CR notes that water damage "can be hard to detect." However, there are some telltales to look for (Torque News also noted many of them in the first part of this report).

One last piece of advice is for those owners with vehicles that weren't affected by a flood but who may live in an area that has been flooded.

Always Use A Mechanic’s Check

If your car "wasn't damaged, be aware that buyers might suspect it was. Have a mechanic inspect your vehicle before you put it up for sale so that you present a potential buyer with a clean bill of health."

Flood vehicles are cars and trucks totaled by insurers because of their exposure to flood water. Consumers would never see them in an ideal world because they have been withdrawn from the market because of flooding. Whether ravaged by saltwater, storm surge, or freshwater, these vehicles should be toast.

Insurers routinely will total them, at which time they become salvage vehicles. Even if you had just purchased your Ford F-150 Lariat, only to have it flooded out by a storm like Hurricanes Ida or Nicholas the very next day, according to the insurance industry, it is a goner. Honestly, it makes sense. Let's face it, the type of water that inundates it is perhaps the critical factor. A major secondary factor is the toxic soup of chemicals in which the vehicle may sit for days or even weeks. 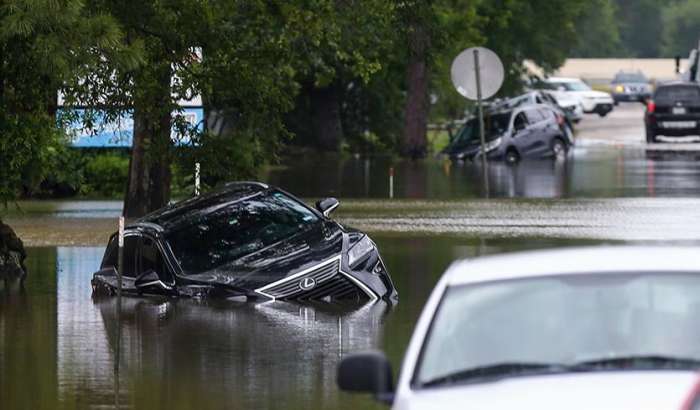 Teddy wrote on September 27, 2021 - 1:47pm Permalink
Any and all vehicles that are totalled by the insurance industry should be scrapped in a junkyard and crushed, never resold or sold to anyone and never parted out, only crushed. This needs to be Federal Law for all States