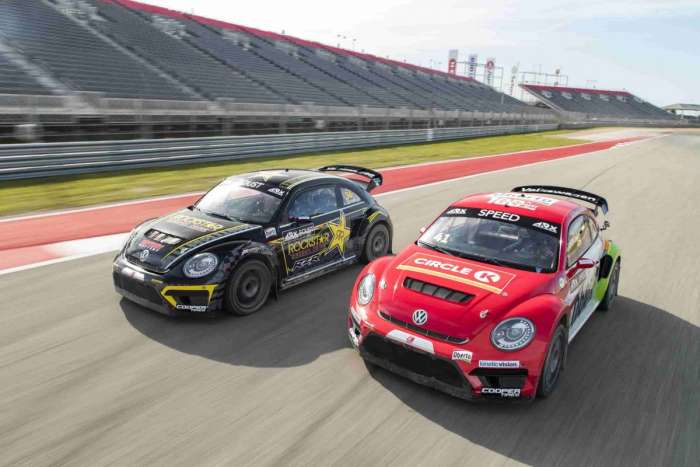 In the first event of its kind, the Nitro Rallycross event, scheduled for Utah's Motorsports Campus this weekend, has attracted the current leaders of the American Rallycross series, Scott Speed, currently atop the leaderboard, and Tanner Foust, who is sitting second.
Advertisement

Scott Speed and Tanner Foust, currently the leaders in the Americas Rallycross championship, hope to put their names in the records as the first winners of the new Nitro Rallycross competition when the dust settles at the Utah Motorsports Campus.

Speed and Foust will face off against some of the world’s greatest rally and action sports. Speed and Foust, who drive for Volkswagen Andretti Rallycross, will be among the many protagonists driving in the one-off, all-star event over the weekend.

Each driver hopes that when the checkered flag waves, after all, is wrapped up, each will have earned the right to stand atop the podium in what promises to be a spectacular event. Each also hopes to be the first to put their name in the record book as the first Nitro Rallycross winner.

Speed and Foust currently sit first and second in the Americas Rallycross (ARX) championship standings. The results of the Nitro World Games have no effect on the on the pair’s ARX standings. Each driver, though, is hoping to make the most of their outing in Utah.

Speed told an interviewer that the unique nature of the event attracted him and his driving partner Foust. “This is an all-out, go-for-broke situation,” the driver of the No. 41 Oberto Circle K Beetle Rallycross. “This race doesn’t pay points, so its all about going for the win, especially when you have some of the top drivers out there competing for the trophy.” Speed is the reigning ARX champion.

A combination of exciting challenges which stretch both cars and drivers captured the imagination of Tanner Foust, the pilot of the No. 34 Rockstar Energy Drink Beetle Rallycross.

“Just looking at the track map is going to be insane,” Foust leveled with the interviewer. It’s a different challenge to what we normally face, and I think it will provide something truly unexpected for drivers, teams, and fans alike.”

The Nitro Rallycross event features a unique course layout, designed by action-sports superstar Travis Pastrana, who will also compete in the weekend’s racing. The track consists of several banked dirt corners and multiple joker lap options, including the intersection of a tunnel section, tabletop jump, and gap jump that could provide plenty of fireworks during race time.

Live coverage of the Nitro Rallycross will air on Velocity and the Motor Trend app at 4 p.m. (EDT) on Saturday and at 4:30 p.m. Sunday.