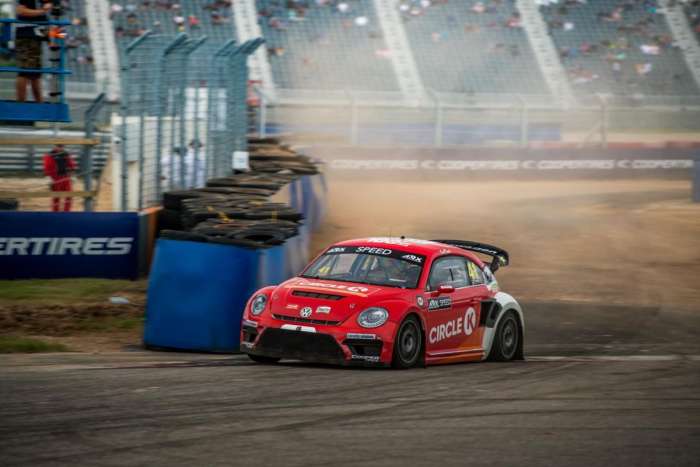 Scott Speed held off a hard-charging Tanner Foust to cement his driving championship in the ARX. Though Speed finished on of the Semifinals to set the stage for his COTA points win, Foust managed to win the fourth ARX of the season.
Advertisement

Tanner Foust did yeoman’s work by winning the inaugural Americas Rallycross (ARX) event at Austin, Texas’ Circuit of the Americas (COTA). However, the effort just short, as his teammate Scott Speed, did what he had to do to nail down the championship. During the shortened racing season – there were four events for 2018 – Speed and Foust were the front-runners. The pair snapped at each other’s heels during the events that lead up to COTA.

Foust won Semifinal 1 having taken a point out of Speed’s Championship lead at the Intermediate Classification, but by winning Semifinal 2, Speed was assured of the title as long as he just started the final to claim the one point required to be the champion. Speed took the start as he was lined up alongside the pole-sitter, his partner Foust. Speed dove straight for the joker lap, as Foust took the hole-shot into Turn 1 ahead of Loenbro Hoonigan’s Steve Arpin. In the Loenbro Hoonigan Ford Focus RS RX, Ken Block immediately pulled off the grid as the lights went green with a technical issue.

Drivers Mix It Up On Turn 1

Meanwhile, Subaru’s Toomas “Topi” Heikkinen and Patrik Sandell followed Speed into the Turn 1 joker. In the maneuvering, Sandell made a last-minute change and took a non-standard line. He managed to hold onto third, when the track dust cleared, even though Speed did pass him. On Lap 4, Foust took his joker lap but held onto the lead to earn his second win of the inaugural ARX season. Speed finished second, and Arpin claimed his first ARX podium in third.

Heikkinen made a creditable race of it, but he finished fourth. He is driving for the Subaru Rally Team USA. Meantime, Sandell finished fifth in the last round and third in the championship point standings. Subaru’s Chris Atkinson and Xite Racing’s Oliver Bennett jousted in Semifinal 1, and GC Competition's Liam Doran had a battle with Sandell in Semifinal 2 but finished the race with a blowout.

DirtFish Motorsports driver Conner Martell secured the ARX2 Championship a Semifinal 1 victory. In the final, he lined up on pole position. He took the hole-shot into Turn 1. Meanwhile, Dreyer & Reinbold Racing’s Christian Brooks drove out wide. It allowed Fraser McConnell and Keatts Motorsport’s Cole Keatts to move up.

McConnell climbed into the lead when Martell was forced out on Lap 2 by a flat. It was Buhl Sport Detroit’s Alex Keyes – he had taken the joker on the first lap – who moved forward to sweep the weekend at COTA with a pair of victories. Jamaica’s Fraser McConnell finished second, and 18-year-old Brooks finished third.