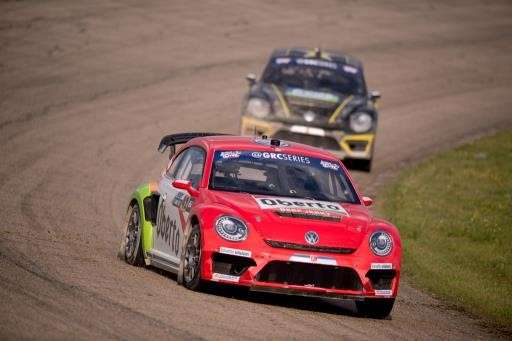 Scott Speed and Tanner Foust started off their World Rallycross season in style Sunday as Speed held off Foust to earn his 13th total first place finish while Foust took second and the points for that position. The Memphis competition was the first race of the season.
Advertisement

Looking every bit as sharp as they did last season when they procured the World Rallycross Manufacturer’s Cup for Volkswagen and honors for themselves, Scott Speed and Tanner Foust finished 1-2 in this season’s first round of the compact championship series.

For Speed, his first place finish marked the 13th time in his career that he has taken first place in the tough competition. His win also sets him up for the early lead in the 2017 driving championship battle.

Starting off strong, Speed was the pole-sitter following a commanding performance in the qualies that led up to the finals of the season starter in Memphis. He had a near-perfect weekend as he piloted his Beetle GRC to two wins in two early Heats, a semi-final and then the final race. He did have one glitch when the No. 41 Oberto Circle K Beetle GRC finished third in Heat 3B. A slow start, which allowed his rivals to dive past him a the start, kept him from a better finish.

Ultimately, the victories that he scored put him into a commanding position when the flag dropped on the Final. A red flag blunted Speed’s great start in the Final. However, when the race restarted, Speed jumped out to a lead he never gave up as he walked away with a clear win in the Memphis tussle, his first win of the season.

Grinning after the race, a jubilant Speed said that the almost perfect weekend was “obviously a great way to start the season.” He was satisfied with his team and the way it ran like clockwork. “Our whole time here was really smooth, and that doesn’t just happen by accident. Lots of hard work made this possible, so I've got to give a shout-out to everyone at Andretti and Volkswagen who made this result possible.”

The driver of the number two finisher, the No. 34 Rockstar Energy Drink Beetle GRC, Tanner Foust was equally as excited as his winning teammate (they both race for the Andretti-Volkswagen World Rallycross team). Quick on the 1.18-mile Memphis International Speedway circuit, set the second-quickest qualifying time behind Scott Speed. Foust’s performance set up a tough road for the rest of the weekend for the two-time series champ. Foust earned second-place finishes behind Speed in the first round of Heats on Saturday. He took his first prelim win of the season in Heat 3B.

The victory set up a battle royale in Semi B. Foust used his front-row position to race to victory, claiming a second-place grid position in the Final. Being that close to Speed, made things interesting in the Final where the pair were separated by just seconds when the final flag dropped. His inability to pass the No. 41 car, though it kept him from a win, did put him on the podium when the race was over.

Foust Was Excited By The Team’s Performance

Obviously pumped by his performance, the excited Foust said he was “excited for the whole team with a result like this. After qualifying in second and with Scott putting in some amazing Heats, you just have to grab onto those heels and hang on. Overall, this was a great performance on a trick track, so I am very proud of this team and the hard work that’s paid off today.”

As they headed off to the next stop on the World Rallycross tour, the reigning champs had a leg up on their rivals. Because they finished 1-2, they are in great position when the flag drops again on the next race.