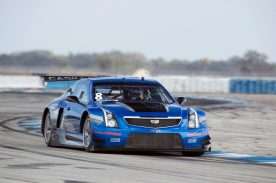 Why Cadillac is pumped about the upcoming race season

Racing is about to get underway in the 2017 Pirelli World Challenge Season. Cadillac is revved up for the race season with the ATS-V.R about to hit the track. The drivers who just drove the all-new Cadillac DPi-V.R prototype to the overall victory at the Rolex 24 will be joining the ATS team for several races.
Advertisement

Race season is so close you can almost hear the engines revving. The Daytona 500 will be February 26, 2017 and testing will run all next week.
Cadillac is anxious to get its race cars back on the track, announcing that it is more than ready for the 2017 Pirelli World Challenge, that begins March 10-12, in the streets of St. Petersburg, Florida, at the Cadillac Grand Prix of St. Petersburg.

Drivers Johnny O’Connell and Michael Cooper are returning for the 2017 Pirelli World Challenge season. They will be joined for five races by the Taylor brothers, who just won big at the Rolex 24 at Daytona. Jordan and Ricky Taylor drove the all-new Cadillac DPi-V.R prototype to the overall victory in the IMSA WeatherTech SportsCar Championship.

The Taylor brothers are pleased to be joining the ATS-V.R team as well. “I am extremely excited to share the ATS-V.R with the guys,” Ricky Taylor said. “I have always been a huge fan of the ATS-V.R program and of Johnny and Michael, so getting a chance to contribute to the team and hopefully another championship is a great opportunity.”

Jordan Taylor says in a statement, “I’ve known and driven with Johnny since 2011 and Michael since 2013. They’ve both won championships and races in World Challenge, so I’m looking forward to driving alongside them and learning more from them.”

The ATS-V.R is a 600 horsepower monster that gets its power from a twin-turbocharged V6 engine. It replaced the CTS-V.R that ran on a V8 engine.
The Cadillac racing program parallels Cadillac’s resurgence as a luxury vehicle. The wins on the race track give credibility to the street versions’ high performance capability.

While the correlation isn't as strong as the connection between NASCAR and regular family cars, there is a definite link in the perception of luxury cars and high performance engines.