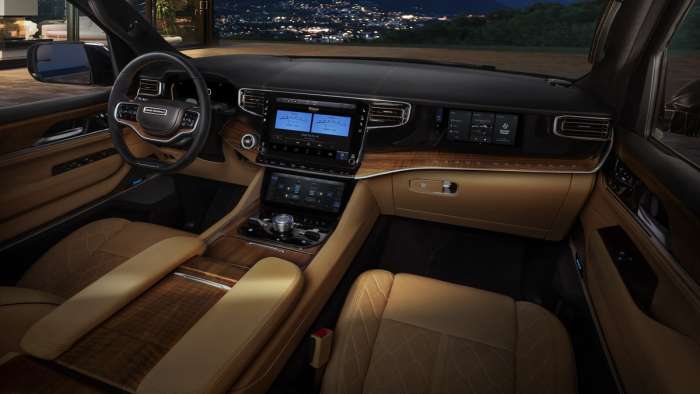 The 2022 Jeep Grand Wagoneer was a unanimous choice for this award, which is almost unheard of in the automotive world. We show you why.
Advertisement

“The sheer artistry of the Jeep® brand’s lavish new interiors is breathtaking,” said Wards Editor Drew Winter. “The Grand Wagoneer easily earns its way into the six-figure SUV club on the power of its interior design.”

“With first-rate, sophisticated materials, such as Blue Agave leather and textured metal trim, plus loads of tech features, including seven stunning high-res screens and an industry-first integration of Amazon Fire TV, the most luxurious Jeep yet is a unanimous choice for a 2022 Wards 10 Best Interiors & UX award,” said Wards Editor Christie Schweinsberg.

Jeep officially brought back the Grand Wagoneer in March of 2021. It used to be a very popular model and Jeep upgraded the new version to compete with top-of-the-line large SUVs. It has space for eight passengers and is loaded with the latest technology. The Grand Wagoneer boasts best-in-class overall passenger volume, best-in-class third-row headroom, and second- and third-row legroom with the most cargo volume behind the third row.
Jeep filled the all-new Grand Wagoneer with premier materials and finishes, like high-end leather seats and real walnut wood and metal accents.

The 2022 Jeep Grand Wagoneer offers up to 75 inches of total screen display area, and nearly 45 inches of screens on the front instrument panel. It has a digital rearview mirror, rear-seat monitoring camera and 23-speaker entertainment system. The Grand Wagoneer also makes plenty of screens and technology available for the front and rear passengers. It has already won a number of awards since its re-introduction.

New for 2022, Wards combined the Wards 10 Best Interiors and Wards 10 Best User Experience (UX) awards into a single awards program, because they are so closely intertwined. According to Wards, 22 vehicles were evaluated and included new or heavily redesigned vehicle interiors and user-experience technology. Wards analysts evaluated the vehicles on a variety of aspects, including:

“The original Grand Wagoneer was the first premium SUV in the market, and this double honor from Wards — for both the best interior and the best user experience — is strong validation that the all-new Grand Wagoneer delivers on its promise of being the most premium SUV, again,” said Jim Morrison, senior vice president and head of Jeep brand North America. “Designed by the same teams that created the Wards award-winning interior and user experience in the all-new Grand Cherokee L, the new Grand Wagoneer interior is the most luxurious and user-friendly in its segment, offering premium features such as available Amazon Fire TV Built-in and exclusive McIntosh audio.”

When the return of the Jeep Grand Wagoneer was announced, Jeep put its competitors on notice that it was designed to compete with the best of the best. It appears to be more than holding its own in that fight.