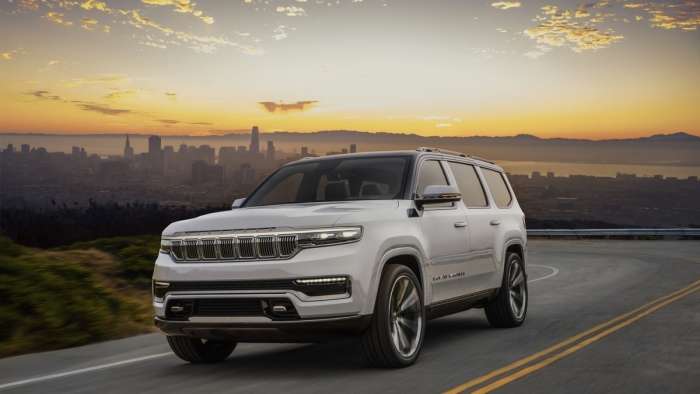 Jeep Puts Competitors on Notice: Grand Wagoneer Will Take on the Best of the Best

Jeep unveils its Grand Wagoneer as a plug-in hybrid but the production version will be a luxury model designed to challenge BMW, Lincoln and Cadillac.
Advertisement

Back in the day, the original Grand Wagoneer was often called the “Colorado Cadillac” because it was the first premium SUV. It rode more comfortably than most other SUVs, had leather seats, air conditioning and most importantly, it was an automatic. Now, Jeep is resurrecting the Grand Wagoneer nameplate and warning competitors that it is reinventing and redefining what is a premium SUV.

“The original Grand Wagoneer was the first premium SUV, and its timeless design combined with the soul of Americana helped it achieve an iconic place in many hearts,” said Ralph Gilles, head of design – FCA. “The Grand Wagoneer Concept is inspired by the original, but with a modern interpretation of luxury and freedom. We strived to create an elegant design with a timeless silhouette, featuring countless beautifully crafted details that come together to give it an undeniable presence.

“The Grand Wagoneer Concept’s interior is spacious and features premium materials that accentuate our team’s obsession to detail and celebrates American craftsmanship,” Gilles added. “A full digital cockpit takes advantage of leading technologies that are beautifully presented with expansive and easy-to-use screens and limited buttons, allowing the focus to be placed on a pleasant and intuitive experience for the driver and passengers.”

The Grand Wagoneer Concept debuts with a hybrid electric-vehicle powertrain, however the production models are not expected to include an electric model when they actually go into production in Warren, Michigan, early next year. The Warren plant is being retooled to build the Grand Wagoneer. It is also being revamped to be able to build electrified models in the future.

“Our new Grand Wagoneer Concept marks the first step in the rebirth of Wagoneer – a true and rare premium American icon,” said Christian Meunier, global president of the Jeep brand – FCA. “With the electrification of each Jeep nameplate coming in the next few years, and the reintroduction of Wagoneer, we are quickly expanding into new segments and more premium space.

“Wagoneer is unquestionably rooted in the legendary Jeep brand and its unmatched heritage of leading capability, authenticity and freedom, and its return allows us to expand to a much more premium arena with new levels of design detail, and advanced safety and technology features,” Meunier added. “While Jeep vehicles bring leading capability, efficiency and performance across the mainstream SUV market, Wagoneer will ultimately become a portfolio of vehicles that will once again define ‘American Premium,’ making it the standard of sophistication, authenticity and modern mobility.”

“For more than a quarter century, the first Wagoneer and Grand Wagoneer created a new segment for American consumers as the ultimate premium SUV of its day,” Meunier said. “The new Grand Wagoneer Concept is our vision of what a modern expression of this timeless icon can be, and hints at how we will redefine and recreate the benchmark premium SUV.”

When the Grand Wagoneer arrives next year, buyers will be able to choose from three different 4x4 systems. It will have an independent front and rear air suspension and plenty of towing capacity.

Grand Wagoneer is spelled out on the lower part of both the driver and passenger front doors. An American flag is next to the letters. Jeep is using premium teak wood accents to highlight the headlights, instrument panel and roof rails. The outer edge of the instrument panel that features the inscription — EST. 1963, indicating the year that the original Wagoneer was born. The Grand Wagoneer joined the family in 1984.

The Grand Wagoneer will feature the all-new Uconnect 5 system which is five times faster than the Uconnect 4. Divers will have a 12.1-inch touchscreen for the main display screen in the center console. There will also be a 10.25-inch touchscreen below, that controls the seats and the climate control. Each second-row passenger also has access to their own 10.1-inch entertainment touchscreen. The Grand Wagoneer will feature an exclusive McIntosh audio system with 23 speakers.

James Myers wrote on September 7, 2020 - 5:35pm Permalink
Fortunately, PSA will be in control when this new Grand Wagoneer debuts! That said, all is well and one less thing FCA will mess up in their quest to destroy Chrysler and Dodge brands. Several Jeeps and the Chrysler Pacifica is still saddled with the Junk German ZF 9-speed automatic transmission, hopefully Carlos Tavares and his brilliant engineering team will resolve this travesty, show the FCA Illiterates to the front door, be rid of the vermin forever!

Toyota's First EV Will Have a Name of BZ: Toyota BZ
First Videos From Inside The Boring Company's Las Vegas Loop
END_OF_DOCUMENT_TOKEN_TO_BE_REPLACED