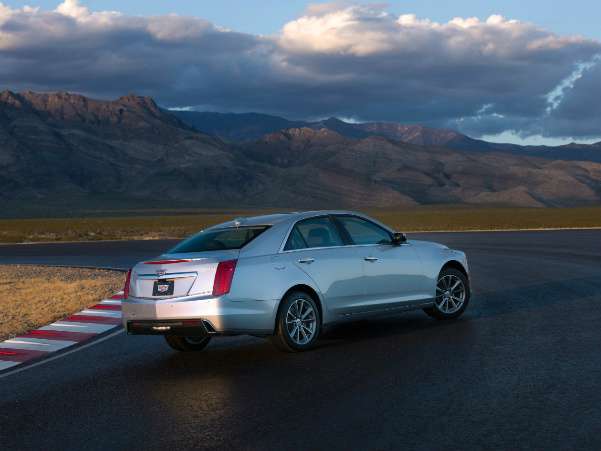 Some owners of the 2017 CTS say that when they get in their brand new car some of their CUE vehicle options are missing. When they call Cadillac customer service, they are upset with their response.
Advertisement

The buyer of a 2017 Cadillac is threatening to return his brand new CTS after problems with his CUE system and key fob. He has gone on a Cadillac forum to warn others about his frustrating issue and the fact that he is getting conflicting stories from Cadillac customer service.

The driver we’ll call B says “I picked up my 2017 CTS 3.6L Luxury AWD last Friday and almost immediately noticed that several vehicle options within the CUE system were missing. I would go into Settings>Vehicle>Comfort & Convenience or Collision/Detection Systems and several options that should have been there were not. I called Cadillac Customer Support and they had me turn the car off, walk away from the car so the fob was not detected, get back into the car, wait for the dome light to go off and start the car. Magically, the options that were missing before were now all there. Unfortunately, after driving the car a few times the settings once again disappeared. I called back into Cadillac Customer Support and they tried resetting the vehicle and radio settings to factory presets which did not help. We then tried leaving the car and restarting after the dome light went off again and the settings reappeared, just like before. The rep then put me on hold for a lengthy time while she investigated the cause and came back with a shocker. She said that in order for the system to work properly you need to wait until the dome light goes off before starting the car to allow time for the system to recognize the key fob - EVERY TIME! Not believing what I was hearing I asked "so you are telling that I have to get in the car and sit for almost a half minute each and every time before I start the car for this system to work properly" and she said yes. When I said that I had a 2014 with an almost identical system set-up and never had to do it before she said thats how it was designed for the 2017's.”

Another Cadillac buyer is having the same issue. Mike says, “Well, I picked up my 2017 today. Good news is that the problem I had with CUE and Apple devices that prompted the change from my 2016 seems to not be presented so far. Bad news is, I'm having the same problem B described. I noticed something was up when I got back in the car and my seat didn't see quite right and the layout of the reconfigurable dash wasn't how I left it. It repeatedly defaulted to mileage in the left most display. It was also saying I was Driver 2, so figured I would switch key fobs. The settings continued to be wrong, so I turned off the auto memory recall and figured I'd turn it back on with key 1 linked and the other out of range...except the option to do that and many other things is now missing. I can't seem to get it back at all. I have to manually move the seat back to position 1 when I get out.”

B called Cadillac customer service again and a different person told him that “the previous person was wrong. You should not have to wait for the dome light to go out in order for the CUE to recognize the key fob."

Customer service sent B back to the dealer. B says that if the dealer can't fix the problem, then he doesn't intend to keep the car. It would be interesting to know if this problem is occurring on other 2017 Cadillacs. Making drivers wait to start their vehicles, especially in very hot or very cold weather, will not be something many luxury owners will tolerate.

Parks McCants wrote on October 13, 2016 - 1:10am Permalink
When they build the perfect car... Thank you Mary for sharing.
Mary Conway wrote on October 19, 2016 - 7:07pm Permalink
I hope to live to see the perfect car! Thanks, Parks!
Tradetodeath wrote on November 20, 2016 - 6:11pm Permalink
I had a problem with CUE in a 2016 CTS-V. It would reboot suddenly, and quite randomly. But it also did some of the things described in the artcle. Including not liking iPhones connected by Bluetooth. Cadillac finally replaced the "Human Interface Unit" and it now works perfectly and all problems went away...So, perhaps if Cadillac would do that for you it would help?
Mary Conway wrote on November 21, 2016 - 11:38am Permalink
Thanks, Trade! What a great suggestion, someone was able to finally identify the problem!
Brian Hanrahan wrote on February 28, 2017 - 7:52pm Permalink
Mary, this problem IS NOT fixed. Cadillac currently does not have a fix for this or a date when one will be available. I have been dealing with this for five months and Cadillac has basically told me that I have to deal with the issue until they come up with a fix - whenever that may be.
Brian wrote on February 28, 2017 - 7:49pm Permalink
I have been suffering through the issue described in this article since I picked up my 2017 CTS in September, 2016. This issue IS NOT fixed and Cadillac's response has been nothing short of horrible and insulting. For five months I have been told that Cadillac is aware of the issue but they have no fix or date when one will be available. They are unwilling to fix the issue and also unwilling to take the car back. They are also selling more of these cars everyday with a known issue and no know fix - a heck of a way to run a business and treat your loyal customers.
Mary Conway wrote on March 1, 2017 - 4:02pm Permalink
Brian I am sorry to hear that this problem is continuing. Cadillac is usually much more responsive to its customers. Hopefully, your dealer is trying to make things right.
Regina Stowers ... wrote on December 6, 2019 - 12:14pm Permalink
I purchase a 2014 SRX in 2015. I too have same issues like all of the above. Two years out I am having issues with CUE system being several times to the dealer they repaired it once not sure what they did??? Now just less than a year the system is playing up again; no press buttons work and the screen is doing tricks like move up/down, calling numbers, GPS routes me where I had gotten lost. Thing amazes me is GM knows about this problem and nothing is done about it they sell these expensive cars with a DEFECT CUE SYSTEM AND IT ISN'T RIGHT OR FAIR TO THE CUSTOMERS SPECIALLY WHEN THEIR WARRANTY HAD EXPIRES. Cadillac isn't doing anything about it. They want $1200 to replace whatever needed they doing even tell me if it the screen or the radio itself. I am disappointed and frustrated owning my car for 5 years CUE system went out on me 3 times. Also all the bad reviews GM is not doing a dame thing about.