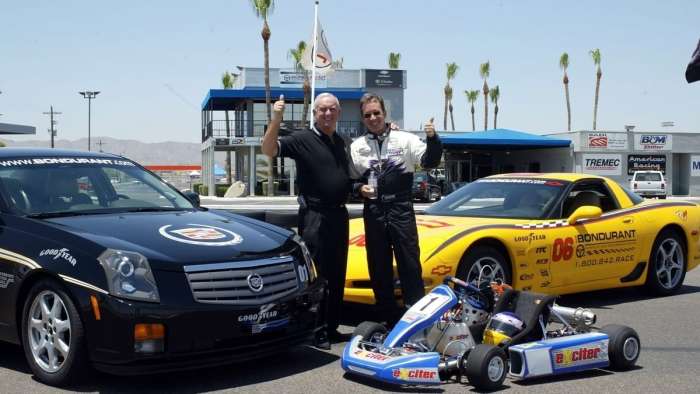 Younger race fans may recognize Bob Bondurant's name because of his racing school, but Bondurant was a World Champion Race Car Driver.
Advertisement

Bob Bondurant once said, "My life has been lived in two halves. The first was becoming a World Champion driver. The second was teaching the world to become champions." He will be missed, especially by those of us lucky enough to have met him. Social media is filled with tributes to man who loved racing and wanted everyone else to love it and be better at it, as well.

Bondurant died in Paradise Valley, Arizona. He is survived by his wife, Pat. During his race career, Bondurant raced countless different types of cars. Bondurant is the only American to bring home the World Championship trophy back to the U.S. while racing for Carroll Shelby. He won his class at Le Mans and has been inducted into ten motorsports halls of fame. Let that sink in for a minute. He is in ten different motorsports halls of fame.

According to information released by his racing school, Bondurant first started racing on motorcycles but quickly moved on to cars. In the late 1950s and early 1960s, Bondurant won the National Corvette Title, Le Mans GT, the World Championship, and the Baja 500. Between 1961 and 1963, he won 30 out of 32 races in Corvettes. Bob is the first and only American to bring the World SportsCar Championship trophy home to America in the legendary Shelby Daytona Coupe #26. He then rose to the highest level in racing with Ferrari in Formula 1 and prototypes. Bondurant left the Formula 1 race series to race the even faster Can-Am cars in the Lola T70 Mark II. Bondurant retired from racing at 79 after winning his last race at Pomona Raceway in his #72 ERA GT40.

In 1967, Bondurant was nearly killed in a race at Watkins Glen. He claimed that he got the idea for the racing school while lying in traction at the hospital. Bondurant reportedly vividly remembered his conversation with God explaining to Bob that he was needed more on Earth and to start a driving and safety school to save thousands of lives of those otherwise dying on the highways and in motorsports. He founded the Bondurant School of High Performance Driving in 1968.

Bondurant’s school is known worldwide for its ability to teach the fundamentals of driving to virtually everyone. Bondurant was considered "the global expert authority on driver training and safety." He copyrighted his approach as "The Bondurant Method." The school is best known for teaching racing skills to up and coming drivers and celebrities who are either portraying race car drivers or are interested in racing.

Bob Bondurant stayed active and was often at the track up until recent years. His wife, Pat, vows to carry on his legacy by continuing the Bob Bondurant School of High Performance Driving.

LG's New EV Battery Plant Is a Welcome News for Tesla
Tesla Giga Berlin's New Hurdle: It's Not Only the Gov't, but Now Tesla Itself
END_OF_DOCUMENT_TOKEN_TO_BE_REPLACED