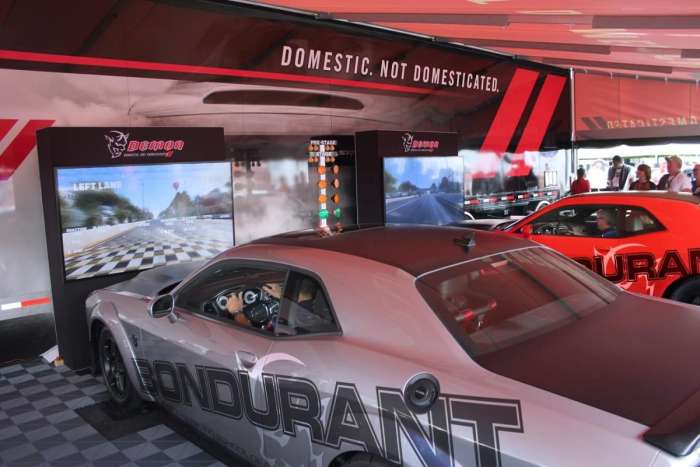 Why Dodge is Looking for Racers

Dodge is sponsoring a new contest inviting Dodge fans to compete on drag racing simulators. It is all part of a new push for the automaker!
Advertisement

Dodge is inviting racing enthusiasts to compete for a chance to attend the famous Dodge//SRT Bondurant Drag Racing school. Fans can enter what Dodge is calling the ‘Drag Strip Showdown’ at Dodge sponsored National Hot Rod Association races as well as other events. The contest starts July 19 and runs to November 11. Dodge produces a number of performance vehicles including the popular Dodge Challenger SRT, Dodge Charger SRT and Dodge Durango SRT.

Fans Get to Test Their Skills in Simulators

Fans will have the chance to race in simulators competing for the best race times. Leaderboards will instantly display competitors’ run times and ranks. The eventual top four winning competitors will be awarded trips to the Dodge//SRT Bondurant Drag Racing School.

“Always a popular draw at events, the Dodge Challenger SRT simulators provide drivers with incredibly realistic, interactive drag racing experiences as they go head-to-head to see who has the fastest reaction time and quarter-mile time,” said Steve Beahm, Head of Passenger Car Brands – Dodge//SRT, Chrysler and FIAT, FCA - North America. “Honing these skills in the ‘Drag Strip Showdown’ will be excellent practice for working with Leah Pritchett and Matt Hagan before taking the wheel in an actual 840-horsepower Challenger on the Bondurant drag racing track.”

Contestants have to be at least 21 years of age to qualify to win the Bondurant experience. The top four competitors will win the trips. In addition, two additional Dodge fans will be selected at random to attend the Dodge//SRT Bondurant Drag Racing School. Fans will be able to enter a sweepstakes through the online Dodge Garage, once the contest begins July 19th, 2018.

Dodge has a Long History With Racing

The Dodge ‘Drag Strip Showdown’ will kick-off at the 39th annual Dodge Mile-High NHRA Nationals Powered by Mopar runs July 19-22 at Bandimere Speedway outside of Denver, Colorado. Fans will be able to race in the simulators at a number of different events through November 11, 2018.

The race simulators will appear at these events:

The top four contest winning drivers will be coached by Mopar Dodge Top Fuel driver Leah Pritchett and Mopar Dodge Charger Funny Car driver Matt Hagan at the Dodge//SRT Bondurant Drag Racing School. Their final competition will take place in the a special 840-horsepower version of the Dodge Challenger SRT – the industry’s first and only purpose-built, street-legal production drag car and the most powerful muscle car ever.

Dodge is the title sponsor of the NHRA Mello Yello Drag Racing Series national event at Bandimere Speedway. The Dodge Mile-High NHRA Nationals Powered by Mopar marks the 30th year that FCA US brands are race sponsors, one of the longest partnerships in all of motorsports.

Dodge fans can stay in touch with racing news and events at the Dodge Garage, a one-stop online hub and destination for drag racing and muscle car enthusiasts.

The special Dodge SRT vehicles are praised for their handling while having some of the highest horsepower of any street legal vehicles. You can compare them to the top muscle cars from any vehicle maker. The high horsepower makes them halo vehicles for Dodge and Fiat Chrysler, but also modern day legends in the making.