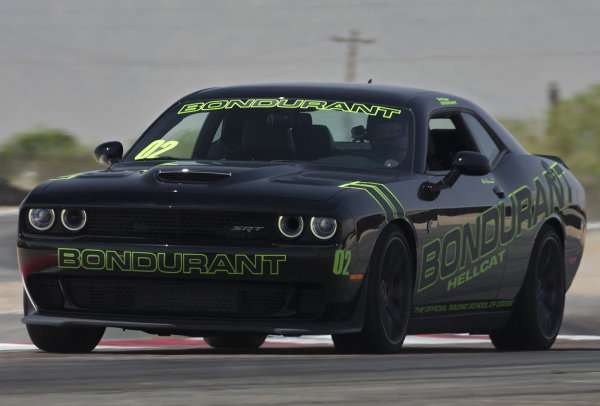 Driving the Dodge Challenger, Charger and Viper at the Bondurant SRT Experience

Earlier this week I got to check something off of my bucket list after attending the new SRT Experience at Bondurant Racing School, where I spent the day pushing the Hellcat Challenger, the Hellcat Charger, the Viper TA2.0 and a handful of other high performance Dodge products to their limits – all under the watchful eye of the school’s world renown race instructors.
Advertisement

These cars are used for a variety of the racing programs at the Bondurant Racing School, but those folks who want to experience a collection of the new high performance Dodge vehicles are opt for the new SRT Experience program. Everyone who buys a new Dodge SRT product gets a free pass to this 1-day track event in Arizona and if a new owner wants to bring someone along – or if you want to attend the SRT Experience at Bondurant without buying a new car – this program has an MSRP of $699.

I was invited by Dodge and Bondurant to visit the school earlier this week for the new SRT Experience and I can say that for fans of the modern Mopar lineup or people who just want to drive very, very fast with the assistance of professional instructors trained by one of history’s greatest road racers, the SRT Experience is worth every cent.

The Skid Pad
The day begins in the classroom, where the instructor explains what you will be doing during the course of the day and the specific skills that the instructors will focus on teaching you on the track. Of course, they explain the fundamentals, but they also teach advanced car control techniques which make you a better racer and a better driver.

Your first seat time at the Bondurant SRT Experience is on the Skid Pad in a Dodge Charger Scat Pack which has been outfitted with an extra set of small wheels connected to a hydraulic cradle system. With the push of a button, the instructor (who is sitting in the passenger seat) can add lift to the front end, the rear end, or both. Lifting the front end removes steering control and increases understeer while lifting the rear end decreases traction and increases oversteer. As you drive around the large skid pad, the instructor adjusts the hydraulic system, which changes how the car reacts in the corner. With each corner, you have to react to the oversteer or understeer condition with the steering wheel, the brakes and the throttle – trying to keep the car pointed in the right direction on the small track.

The video below shows the Charger Scat Pack Skid Pad car in action with a driver who is having a hard time getting the hang of fixing oversteer.

The Road Course
Once you have proven to the instructor that you can control and correct an extreme understeer or oversteer situation, you are permitted to head out onto the 1.6 mile Bondurant Road Course in one of three cars – the Hellcat Challenger with the manual transmission, the Hellcat Charger with the automatic transmission and the Viper TA2.0, which only comes with a manual transmission. Unlike some racing schools where the instructor rides in the passenger seat, the Bondurant SRT Experience uses a small-group lead and follow system, where the instructor drives a lead car ahead of 3 or 4 students.

After a lower speed schooling lap, the instructor begins increasing his speed around the track, essentially pulling away from the student cars and it is up to the students to keep up with the lead car. The better the students keep up, the harder the instructor will drive out front. After each session of 4-5 laps, the instructor leads the small field down on to pit road, where he offers pointers to the students as to how they can get around the track better. In our case, after spending one session in the Viper, I moved onto the Hellcat Challenger for the next and then the Hellcat Charger for the third, getting seat time in each car before beginning to pick which car I preferred the most. The image at the top of this piece shows me driving the Hellcat Challenger during a road course session.

Truth be told, it is a little intimidating at first to be placed into a Dodge Viper TA2.0 and told to keep up with a professional racing instructor, but this system offered me a chance to get a great feel for the car on the lower speed laps so that when the lead car began picking up the pace, I was able to stay right on his bumper.

I want to stress that the Bondurant lead and follow instruction setup isn’t like some other lead and follow programs where everyone is just cruising along at a relatively low speed, well below the capabilities of the drivers or the vehicles. At Bondurant, if you are the third car in line and you spin the tires coming out of a turn or lock the brakes getting into a hard turn – the cars in front of you will drive away. You are given the chance to catch up, but if you continue to fall back, the lead car will eventually call a caution to let you catch up. Unlike other lead and follow programs, the lead vehicle isn’t out there to keep everyone from going fast, but they do make sure that you don’t hurt yourself or the car by running off of the track after getting too deep into a turn.

After starting the day racing in groups of the same vehicles, our later road course session allowed the students to pick any of the three road course cars that we wanted (Hellcat Challenger, Hellcat Charger, Viper TA2.0) and we ran in small groups of mixed vehicles. This later session was the hardest driving of the day and having spent much of the day in my beloved #17 Viper, I continued to hone my skills in the modern supercar late in the day. In my final sessions, I found myself, another student and the instructor pulling away from the rest of the field over and over again and until the lead car had to let everyone catch up, we were hitting the turns and the straights as hard as possible. There was no “holding back” with the lead car and shy of the lack of passing, it was wide open racing action.

Autocross
Finally, we headed to the autocross track where we would challenge the sea of cones with the Challenger SRT 392. This surface was very slick so turning at speed and accelerating out of the turns was a real challenge. This was really more of a test of patience and car control, making sure to get through the turns as quickly as possible since you couldn’t get great traction to storm out of the corners. We each got a schooling run where we all drove through in a long line, followed by a solo schooling run and two timed runs.

My solo schooling run was a disaster, as I got way too deep into the first turn and smoked the tires coming out of the turn, making it more of a drift run than any autocross run. Fortunately, I learned from that first pass and put that information to good use on my first timed run, laying down a 24.58 after being told that anything in the 24 second range was very good and after watching most people run in the 25-26 second range. On my second run, I got through the course even better, with just a little wheelspin late in the run, laying down a 24.12. The bad news was that one other student laid down a 24.11, beating me by one hundredth of a second, but I was still very happy with my performance on the autocross track.

The Final Word
If you are looking for an affordable racing school with high performance vehicles, world class instructors trained by one of the world’s greatest road racers and tons of on-track seat time where you are instructed more than babysat – the Bondurant SRT Experience is an incredible program. For those who want a more in-depth experience with any of the Dodge SRT vehicles - including the new Viper ACR – Bondurant has 3 and 4 day programs as well, but for someone who wants to get a feel for advanced car control and road racing in some of the most powerful American cars ever – the Bondurant SRT Experience is something that should be on your bucket list.

This program was exactly what I had hoped that it would be, as I got to push the Hellcat twins and the Viper TA2.0 as hard as I possibly could. While at times I was held back by slower students, the instructor’s method of slowing turning up the pace allowed me to build my confidence to hammer the Mopar supercar through the tighter turns and along the high speed straights. I have been to a handful of track events, but none were as education or as exciting as the Bondurant SRT Experience.