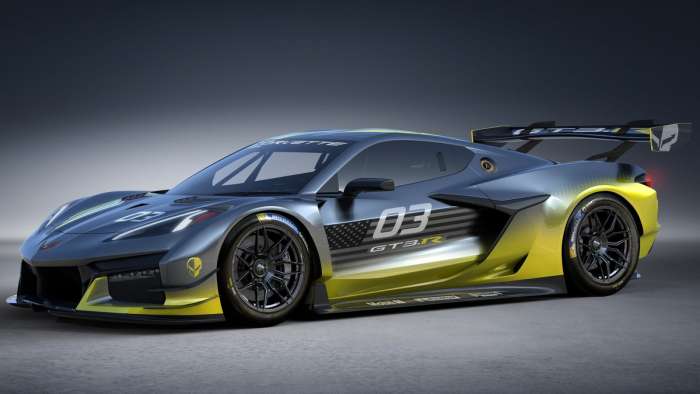 Chevrolet Will Begin Selling Real Corvette Z06 GT3.R Racecars to the Public in 2024

Chevy recently revealed the 2023 Corvette Z06 and confirms that for the first time ever it will sell the Corvette Z06 Racecar to customers in 2024.
Advertisement

The mid-engine Z06 GT3.R will have the same aluminum chassis as the 2023 Chevrolet Corvette Z06 supercar. It will have a 5.5-liter, DOHC LT6 V8 engine that is modified for the racecar. It will have the same flat-plane crankshaft design that is already featured in the Corvette C8.R. Corvette confirmed during the debut of the 2023 Corvette Z06, that the Z06 would have the same basic engine that has been powering the Corvette race cars. This will be the first time that customers will be able to drive a racecar so close in design and power to the real racecar.

GT3 sports car racing has grown in recent years. Now, customers will be able to enter their own vehicle in sprints or endurance races in a number of different race series.

At the same time, Corvette Racing announced that it is expanding its dance card for 2022 and will now compete in two different race series. Corvette’s production-based race team will compete in both the IMSA WeatherTech SportsCar Championship and the FIA World Endurance Championship. Corvette Racing will field one Chevrolet Corvette C8.R in each series with a two-car effort planned for the 24 Hours of Le Mans.

“This is the most ambitious schedule that Corvette Racing has faced in its nearly 25 years of competition,” said Jim Campbell, Chevrolet U.S. vice president, Performance and Motorsports. “It will be an honor to race in both the IMSA and WEC series at some of the best tracks in the world.”

All six Corvette Racing drivers from 2021 will return for the new season. Antonio Garcia, Jordan Taylor and Nicky Catsburg make up the attack in IMSA while Tommy Milner, Nick Tandy and Alexander Sims contest the WEC.

Corvette Racing is closing its 2021 season, today, with the 10-hour Petit Le Mans at Road Atlanta. Chevrolet has won 13 Manufacturers Championships in IMSA since 2001.

Andrewelowl wrote on November 14, 2021 - 8:06am Permalink
Analogues are available?

LG's New EV Battery Plant Is a Welcome News for Tesla
Tesla Giga Berlin's New Hurdle: It's Not Only the Gov't, but Now Tesla Itself
END_OF_DOCUMENT_TOKEN_TO_BE_REPLACED