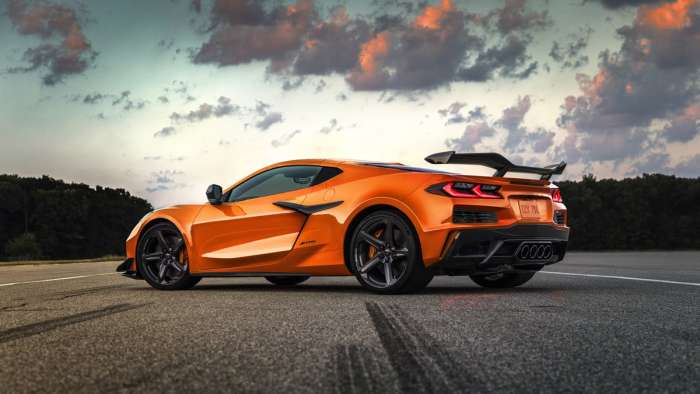 Designed to be a race car for the streets, Chevrolet's new supercar is built around its new LT6 DOHC V-8 flat plane crank engine.
Advertisement

After years of hoping and waiting fans are finally able to see the incredible 2023 Chevrolet Corvette Z06 in its full glory. The truly American supercar's newest iteration will be its most powerful ever with 670 horsepower and a top speed of 186 mph, a track-based beast that is street legal. Chevrolet unveiled the highly anticipated Corvette with a video about its design which revolves around the new free-spinning flat plane crank V-8 engine.

“The new Corvette Z06 defines the American supercar,” said General Motors President Mark Reuss. “It builds on the distinctive design and groundbreaking dynamics introduced with the mid-engine Corvette and elevates them to deliver refined but uncompromising track capability with world-class performance.”

Everything about this unveiling and the publicity leading up to it was about the Corvette being able to compete on the world stage. In the video, Reuss says there will be a right-hand version produced so that the Corvette can be a global supercar, able to compete with the BMWs and Ferraris.

The design of the 2023 Chevrolet Corvette Z06 is meant to be more exotic, with a wider front and rear. The Z06 rides on huge 21 x 13-inch rear tires giving it a more confident stance. One of the first things you notice is the unusual rear spoiler, designed to improve high-speed stability and cornering.

“Corvette has always brought a discerning customer to the Chevy family,” said Steve Hill, vice president of Chevrolet. “This new Z06 was designed and engineered to set a higher bar with increased levels of craftsmanship, personalization and performance so customers can truly have their own bespoke performance car.”

In the video Tadge Juechter, Corvette’s chief engineer talks about the creation of the Z06, a secret code that buyers could use when ordering the original Z06 back in 1963. The secret of the Z06 special performance package was shared by word-of-mouth so true enthusiasts could order the Corvette with racing components. The Special Equipment Package included a stiffer suspension, heavy duty brakes, a thicker front stabilizer bar, and a large, 36 gallon fuel tank that reduced the number of necessary pit stops in longer races. A fuel-injected 5.4-liter engine (327 cubic inches) and a close-ratio four-speed manual transmission were required with the package, in 1963. Now everyone can order a street car with a race car’s heart.

The Z06 is set apart by its all-new 5.5L LT6 engine, the highest horsepower, naturally aspirated V-8 to hit the market in any production car. The all-new flat-plane crankshaft design will rev to a phenomenal 8,600 rpm, creating 670 hp. Engineers spent two years making sure the engine sounds like no other and can be heard inside the vehicle as well, so the driver can enjoy the feeling of power in the supercar.

“Racing was the reason the Z06 was developed in 1963, and it continues to support development of the road models that make them better on the street and the track,” said Tadge Juechter, executive chief engineer, Corvette. “It also means we’ve tested the Z06 on the best tracks around the world, from Circuit of the Americas here in the United States, to the Nürburgring in Germany.”

It had been rumored that the Z06 chassis was being used in the Corvette race cars and that was confirmed today. The Z06 chassis has underpinned Corvette Racing’s C8.R since it began competing in 2020. Thanks to a shared chassis, similar engine architecture and exterior proportions, the C8.R has been referred to internally as the Z06 hiding in plain sight. More importantly, the race car has been successful. The Corvette C8.R excelled in IMSA’s 2020 sports car championship series, capturing six victories and setting the fastest class race laps in six events. During the 2020 series, Chevrolet won the GT Manufacturers title – its 13th since 2001. Jordan Taylor and Antonio Garcia and the No. 3 Corvette C8.R crew won the GTLM Drivers and Team championships.

“Virtually every component that distinguishes the Z06 was developed to support or enhance its capability,” said Juechter. “By leveraging the mid-engine architecture’s inherent advantages, we are able to achieve six percent more downforce than a seventh-gen ZR1 at eight percent lower drag.”

The 2023 Corvette Z06 debuts an all-new 5.5L DOHC V-8 engine that marks a return to natural aspiration for most powerful V-8 ever. The key to the LT6’s performance capability is a lightweight, low-inertia rotating assembly rooted in an all-new flat-plane crankshaft that, along with a comparatively short stroke (the distance each piston/connecting rod assembly travels with each rotation of the crankshaft), allows the engine to redline at 8,600-rpm. GM testing has estimated the engine producing 670 horsepower and 460 lb.-ft. of torque.

The LT6 is hand assembled by master engine builders at the Performance Build Center within the Bowling Green Assembly Plant in Kentucky. Builders use precision tooling and hand fit pieces of the engine to meet Chevrolet’s exact specifications. Each engine features a plaque on the intake manifold with the signature of the technician who crafted it from start to finish.

“To match its performance, the Z06 is an elevated execution of the eighth-generation design,” said Phil Zak, executive design director, Chevrolet. “From its wide planted stance with sculpted surfaces to its premium and carbon fiber materials, the Z06 instills an aura of raw power and performance with bespoke craftsmanship.”

According to the Chevrolet press materials, the Z06 will offer the most personalization choices in the Corvette lineup including:

The 2023 Corvette Z06 will go into production in the Summer of 2022. Pricing has not yet been released. It will be built at the Bowling Green Assembly plant.

LG's New EV Battery Plant Is a Welcome News for Tesla
Tesla Giga Berlin's New Hurdle: It's Not Only the Gov't, but Now Tesla Itself
END_OF_DOCUMENT_TOKEN_TO_BE_REPLACED