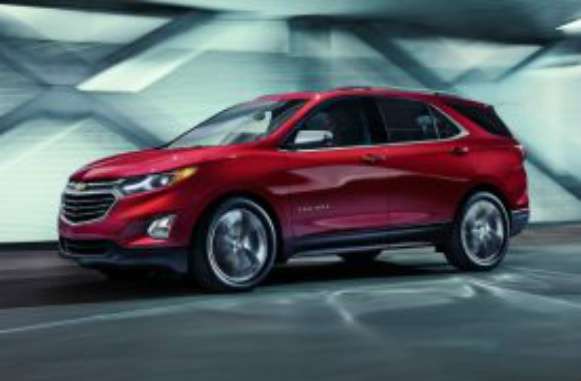 Chevrolet chose the autumnal equinox to unveil the redesigned 2018 Equinox compact SUV. The new version is a tad shorter, 400 pounds lighter and now is available with a diesel engine. Chevrolet intends to sell the new Equinox in 115 markets globally.
Advertisement

The Equinox is Chevrolet’s top selling SUV, in fact, it is second only in sales to the popular Chevy Silverado. The 2018 vehicle has been totally redesigned, as the company prepares to start selling it globally. In a statement, Rick Spina, executive chief engineer says “It is an all-new SUV from the ground up and one that takes on the industry’s biggest competitors with a stronger architecture, greater efficiency and more technology, and it looks great doing it.”

The biggest news is under the hood. All three of the engine choices are turbos, and according to Chevrolet, the 2018 Equinox will feature the first turbo-diesel available in the compact SUV market. The engine choices include a 1.5L turbo, a 2.0L turbo — matched with GM’s new nine-speed automatic transmission — and a 1.6L turbo-diesel. The diesel option is timed perfectly to take advantage of the buyers who are furious with Volkswagen after its diesel fiasco, but still love the cost effectiveness of a diesel.

The 2018 Equinox is 4 inches shorter and appears to take many of its design cues from the Malibu, Cruze and Volt. It appears leaner but according to the news release actually has more cargo space than the older versions. Some of the added space may come from new rear seats that can be folded flat.

Chevy intends to market the smaller SUV very aggressively and has designed it to compete with the most popular European competitors. “We’ve got the strongest truck business in the industry and we’ve reinvigorated our car lineup with Volt, Cruze and Malibu,” said Alan Batey, Global Chevrolet president. “We’re applying the same customer focus to grow our crossover/SUV business — starting with the Chevrolet Equinox.”

The 2018 Equinox comes equipped with all of the latest safety devices, including the new rear seat alarm to prevent children from being left in back seat. It will also offer the Teen Driving controls that allow parents to monitor their teen’s driving. Other safety features include; forward and rear collision alerts, lane change alerts and low-speed forward automatic braking to help prevent accidents.

Chevrolet says the 2018 model will be available early in 2017 in the U.S., but will be sold in 115 global markets later in the year. Diesel is much more popular in Europe and could be a major selling point.