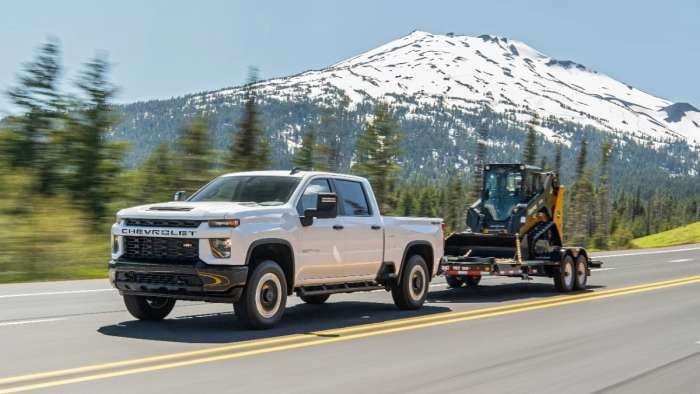 General Motors is focusing on building more 2021 trucks and like the Chevrolet Silverado 1500 and HD versions. The automaker announcing it is making 650 temp workers full time to crank out trucks, large SUVs and mid-size trucks.
Advertisement

General Motors is counting on the strength of its truck and SUV sales to add more permanent workers. GM announced today that it is converting 650 temporary workers to full time. The employees work at nine different facilities but the overwhelming majority are producing trucks like the 2021 Chevrolet Silverado 1500 and the Heavy Duty versions of both the Chevy Silverado and the GMC Sierra.

"We are proud to welcome these team members as regular, full-time employees," said Phil Kienle, GM vice president of North America Manufacturing and Labor Relations. "Our people are the heart and soul of everything we do and through their hard work and dedication to building quality products, they are taking the next step in their journey with GM."

According to General Motors, the temporary employees work at nine GM manufacturing plants and other sites in four states: Michigan, Indiana, Texas and Missouri. Many were brought on to fill production vacancies caused by the Coronavirus.

Nearly half or about 300 of the permanent positions are at the Flint Assembly plant which currently builds the 2021 Chevrolet Silverado and GMC Sierra Heavy Duty trucks. According to General Motors, Flint Assembly has 5,069 hourly workers.

The giant plant in Arlington, Texas, that builds the 2021 Chevy Suburbans, Tahoes, GMC Yukons and Cadillac Escalades will see about 100 temp workers become full time. Arlington is building about 1200 vehicles a day. It currently has 5,078 hourly workers on three shifts.

General Motors has invested more than $29 billion in its U.S. manufacturing operations over the last 10 years.

GM has invested very heavily in its Wentzville, Missouri, plant that builds the Chevrolet Colorado and GMC Canyon mid-size trucks. Dozens of temporary jobs will be made permanent there. In 2019, GM announced $1 billion in upgrades to Wentzville, which also builds the Chevy Express and GMC Savanna vans.

The Chevy Silverado is Still GM’s Bread and Butter

The other big plant expected to make a lot of temporary jobs permanent is the Fort Wayne Assembly plant. Fort Wayne builds more than 1000- 2021 Chevrolet Silverado 1500s and GMC Sierra 1500s every day. Fort Wayne has just under 4000 hourly workers.

The other jobs are scattered over several other facilities, but you can see the majority are at the four plants building GM’s best-selling and most valuable products. In many of these cases, General Motors was required by the UAW union contract to convert the temps to full time because they have worked for the automaker for so long. I’m sure the workers will tell you they are relieved to get the increased job security, pay raises, improved insurance and vacation benefits. The temps are being moved up later in January.