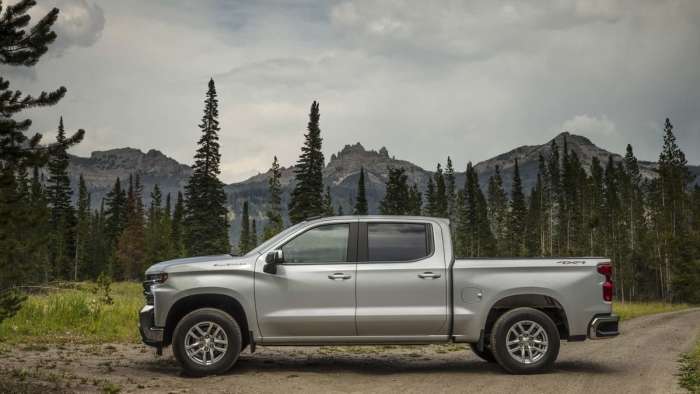 General Motors CEO Mary Barra told the Wolfe Automotive Research Conference that the automaker is quickly gearing up its production and that it is focusing on building trucks like Chevrolet’s popular 2020 Silverado 1500. All of the Detroit three have stressed the importance of building the profitable pickups, especially after the automakers were forced to shut down plants because of COVID-19.

CNBC is reporting that Barra told the conference, “It’s important now, especially with trucks, that we are getting vehicles back online,” Barra said. “There’s very strong demand from our dealers for more vehicles, especially trucks.”

Barra reportedly said that GM should be back to nearly pre-Coronavirus production levels by the end of June. “This week we’ll continue to add additional shifts in our North America plants, and we think we’ll be close to normal capacity by the end of June, and sooner, if possible.”

GM is back running three shifts at its plants that produce the all-important pickups. However, production levels aren’t back to the pre-Coronavirus pace, mainly because of parts shortages. Also, there are some delays because of all the changes necessary to restart the plants safely. As workers become more accustomed to the changes, production levels may increase.

As Americans Go Back to Work, Trucks are in High Demand

The three truck plants are in Fort Wayne, Indiana, Flint, Michigan, and Wentzville, Missouri. Fort Wayne builds the Chevrolet Silverado 1500s and GMC Sierra 1500s. The Flint facility builds the heavy-duty versions of the Silverados and Sierra. Wentzville builds the mid-size Chevy Colorado and GMC Canyon. GM had planned to add second shifts last week, but were forced to delay adding the second shift because of parts shortages. GM added the second and third shifts this week. Most of the parts shortages are due to delays getting Mexican parts plants back on line. As the supplier plants gear up production, GM hopes to ramp up its production levels.

The delays are especially frustrating for Chevrolet because the Silverado has been on a hot streak. The Chevrolet Silverado was selling incredibly well during the first quarter until the Coronavirus forced dealers to close and the plants to shut down. 2020 Silverado light duty sales were up 33.6 percent over 2019 for the first quarter. Chevy’s most popular truck overtook the 2020 Ram 1500 in first quarter sales.

Dealers have complained that some of the popular trims and truck configurations have gotten difficult to find after the plants were forced to stop production in mid-March. Chevrolet and GMC are said to be focusing on building the most popular trucks first to take advantage of demand that is pent up in the buying public.

GM has already said that it plans to shorten or eliminate some of its typical summer shutdowns as it tries to recover lost production. GM has several high-profile vehicles that it is trying to get out as quickly as possible. Those vehicles include the C8 Corvette, the electric GMC Hummer and all-new 2021 versions of the Cadillac Escalade, Chevrolet Suburban and GMC Yukon.