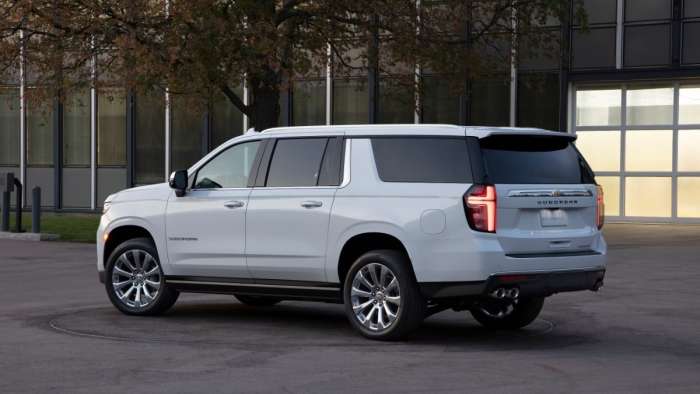 Chevrolet's All-New 2021 Suburban and Tahoe are Bigger, Bolder and Include a Diesel

You can talk all you want about electric vehicles and sports cars but the Detroit Three make their money on pickup trucks and big SUVs. That is why Chevrolet is making its 2021 Suburbans and Tahoes bigger on the inside and more technologically advanced. The 2021 Chevrolet Suburban and Tahoe will also be available with a diesel, which is popular in its pickups.

The redesigned SUVs were unveiled at a sports arena, in Detroit, not far from the General Motors world headquarters.

The optional Duramax 3.0L diesel engine will set the 2021 Chevrolet Suburban and Tahoe apart from its competitors. None of them offers a diesel at this point. The engine was designed for both full-size trucks and the SUVs. The Duramax is rated to have 277 horsepower and 460 lb.-ft. of torque. While Chevrolet is not releasing fuel economy numbers at this point, it is expected to give the SUVs some of the highest fuel economy in the SUV segment.

“There are no vehicles like Tahoe and Suburban – which have starred in Hollywood movies, carried military heroes and world leaders, and helped create countless family memories,” said Barry Engle, executive vice president and president, General Motors North America. “We’ve taken what people love about these pioneering SUVs and made them even better – adding more room for people and cargo, more advanced technology and an unrivaled driving experience.”

Chevrolet used much of its new truck architecture to help redesign the big SUVs. One of the biggest changes is that the 2021 Suburban and Tahoe will have much more usable interior cargo space. According to Chevrolet, there will be 66 percent more cargo room behind the third row in the Tahoe. There will also be 19 percent more cargo space in the Suburban. Both the new Suburban and Tahoe are about 4 inches longer than previous versions.

Chevrolet has been a huge innovator with seat design in the past, creating the tumbling rear seat to make it easier to access the third row. The designers are at it again, this time creating sliding second row seats, to improve the ride for the passengers. The second-row seat can slide approximately 10 inches forward or rearward. Both the second and third row seats are said to fold more easily. The load floor is lower and flatter making it easier for passengers to get in and out or load cargo.

Technology Improvements in the 2021 Suburban and Tahoe

The upgraded interior will offer up to five display screens including:

“With an increasing number of SUVs on the market, we knew the all-new Tahoe and Suburban needed to reach higher than ever,” said Tim Herrick, vice president, global product programs. “We transformed Tahoe and Suburban to offer all-new technologies and features and deliver a better driving experience, while staying true to the versatility and capability that have earned people’s trust for generations.”

The 2021 Chevrolet Suburban and Tahoe will both go on sale in mid-2020. The new vehicles will be available with update V-8 engines including a 6.2L V-8 offering best-in-class 420 horsepower. The new vehicles will feature a 10-speed automatic transmission. Both the Suburban and the Tahoe will feature the Air Ride Adaptive Suspension system and Magnetic Ride Control which are designed to improve the ride and make handling the large vehicles easier.

“I think the most impressive aspect of the all-new Tahoe and Suburban is how well they handle,” said Herrick. “Despite being big, they offer responsive, confidence-inspiring handling that will change expectations for the full-size SUV driving experience.”

The Chevrolet Suburban is the longest-running nameplate in automotive history. It has lasted an astounding 85 years. The new vehicles will be available in six different trim levels providing buyers with more choices and personalization.

Digitaldoc wrote on December 11, 2019 - 11:18am Permalink
What the world did not need is a larger Chevy Suburban, as it was already ridiculously large. soon, you will need a commercial license to drive it. Also, the engines are less than innovative, and would have like to see a V-6 turbo in the lineup.