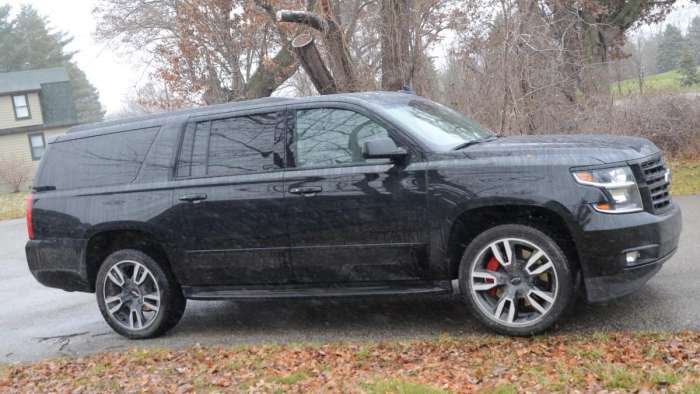 A few weeks back, a representative from Chevrolet reached out to me and asked if I would like to spend a few days driving the 2019 Chevrolet Suburban RST Performance Edition. Of course, my answer was a resounding “yes”, as I had been looking forward to driving the performance-inspired version of one of the most popular big SUVs in American motoring history. Even though the weather in Metro Detroit was cold, snowy and relatively unpleasant, this big SUV was a blast to drive in every situation.

Mind you, this isn’t a vehicle that is going to battle the likes of the Range Rover Sport or the Jeep Grand Cherokee Trackhawk. The Suburban RST Performance Edition is not a purpose-built performance model but instead, it is the tried and true big GM SUV with an injection of high performance goodies that make this the most entertaining Suburban I have ever driven. In fact, the Suburban RST Performance Edition is the most engaging big SUV that I have ever driven and it achieves those lovely characteristics without compromising its working abilities.

Proper Premium SUV
My 2019 Chevrolet Suburban RST Performance Edition test vehicle came loaded up with a price of $81,770, including just about every premium interior feature that you could want from a huge SUV. All three rows of seats are wrapped in plush leather, with the front seats being heated and cooled and the second row seats are heated. The steering wheel, the door panels, the dash cap, the center stack and the center console are all wrapped in similar plush leather, the center console has a wireless phone charger, the steering wheel is heated and the package includes two big screens for the driver – one in the gauge cluster and another in the upper portion of the center stack. From the outside, the 2019 Chevrolet Suburban RST Performance Edition might not look like a premium luxury SUV, but that is exactly what it feels like once you are buckled into one of the plush seats.

However, you can get all of those gadgets and luxury nicities in other, non-RST Performance Edition versions of the Suburban and this review is all about the performance aspect of this big SUV. That being said, I would be remiss if I didn’t point out the gorgeous cabin and all of its features.

The Camaro SS Spirit
The heart of the 2019 Chevrolet Suburban RST Performance Edition is the newest 6.2-liter V8 which is based on the LT1, but it is not called the LT1 like the related engine in the Camaro SS. In the Suburban, this 6.2-liter V8 delivers 420 horsepower and 460 lb-ft of torque, making it the strongest engine ever offered under this nameplate.

All of that power is sent to all four wheels by means of an advanced all-wheel-drive system and a similar 10-speed automatic to the one offered in the new Camaro SS, and like the Camaro SS, the RST Performance Edition features big Brembo brakes. The result of the 6.2-liter engine, the 10-speed transmission and the Brembo brakes is the best-performing Suburban ever. Thanks to the all-wheel-drive system, the Suburban RST Performance Edition allows you to use all of that V8 power from a stop without any concern of traction loss. Stomp the accelerator from a stop and the huge SUV quickly rips along the road, quickly climbing beyond any post speed limit more quickly than any similar vehicle. When you are cruising along, putting the gas pedal to the floor prompts the 10-speed gearbox to pop down a few gears and as the engine RPM soars, the big SUV builds speed in a big hurry. Again, this isn’t an 11-second vehicle, but as vehicles of this size and this weight go, the acceleration from a stop and through the mid-range is nothing short of remarkable.

More importantly, the big Brembo braking system gets the Suburban RST Performance Edition slowed down from high speed in a hurry, so this three-ton SUV stops nearly as well as it accelerates. Also, when cruising along a twisty country road, the Brembo brakes allow you to repeatedly slow down for corners without any concern of fade, so not only does this vehicle stop quickly – but it can do so consistently.

Speaking of those twisty country roads, the Suburban RST Performance Edition comes with the Magnetic Ride Control suspension which constantly monitors driving habits and road conditions to yield the best handling characteristics possible. Again, we have to point out to people with unrealistic expectations, this is still a 6,000-pound, high-riding SUV with a long wheelbase, so you aren’t going to dominate the local autocross scene, but I promise that someone who truly enjoys driving will find more fun behind the wheel of the Suburban RST Performance Edition than they will any other SUV of this size.

Most importantly, the 2019 Chevrolet Suburban RST Performance Edition offers the impressive acceleration, braking and handling characteristics without losing any of the daily driving comforts. When you are driving the big SUV gently, the ride is comfortable, power delivery is smooth and the transmission shifts are subtle, so when you want it to perform like a proper sport utility it will answer the bell, but it is still comfortable enough to serve as your daily driver all year long.

Off-Road and Working Abilities
I would wager that most of the people who buy a 2019 Chevrolet Suburban RST Performance Edition wont be all that concerned about going off-road with their high performance SUV riding on 22-inch wheels, but what about rough, unpaved roads? Fortunately, my area is littered with dirt roads that make for an excellent testing grounds for four- and all-wheel-drive vehicles. While the Suburban RST Performance Edition shines brightest on paved roads, I found that when driving conservatively, the 420-horsepower SUV handles the ruts, holes and loose footing of my local dirt (and mud) roads.

The Final Word
In the past, getting into a proper large SUV like the Chevrolet Suburban meant that you had to settle for unexciting driving dynamics, but that comes to an end with the RST Performance Package. This Suburban does everything that past models have done, in terms of hauling lots of people in the lap of luxury, traversing any terrain in any weather condition and offering solid towing and hauling abilities, but it does all of that while introducing an all-new level of performance. This Suburban accelerates harder throughout the powerband, stops faster and handles better than any version before it or any of the similarly-shaped competitors in the big SUV segment.

If you want a big SUV that will comfortably seat seven in the a luxurious cabin, tow an 8,000-pound trailer and offer high performance driving fun every day of the year, there is no better option on the market today than the 2019 Chevrolet Suburban RST Performance Edition.