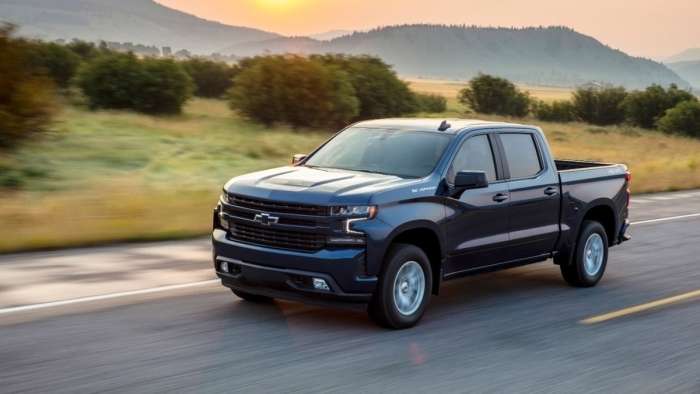 When Chevrolet Plans to Launch 2020 Silverado 1500 Production Into Overdrive

General Motors says it plans to speed up production of its most important vehicles next week. See when they may start building more new pickups!
Advertisement

We have great news for anyone waiting on a new Chevrolet or GMC truck. General Motors is ready to put the pedal to the metal when it comes to pickup truck production. The automaker saying that it intends to add both second and third shifts to the plants that build its 2020 Chevrolet Silverados, GMC Sierras, Heavy-Dutys, and mid-size trucks.

General Motors Chair and CEO Mary Barra said that getting truck production like the 2020 Chevrolet Silverado 1500 back on track was a priority when restarting the company. However, Chevrolet was forced to delay adding its second and third shifts because of parts shortages. Now, apparently GM’s suppliers in Mexico are also resuming operations so the truck plants can start producing at full capacity.

The three truck plants are in Fort Wayne, Indiana, Flint, Michigan, and Wentzville, Missouri. Fort Wayne builds the all- important Chevrolet Silverado 1500s and GMC Sierra 1500s. The Flint facility builds the heavy-duty versions of the Silverados and Sierra. Wentzville builds the mid-size Chevy Colorado and GMC Canyon. GM had planned to add second shifts this past Tuesday, but were delayed by the parts shortages. While GM had planned to stagger the start of the second and third shifts, the delay has forced them to start both shifts this coming week.

The delays are especially frustrating for Chevrolet because the Silverado has been on a hot streak. The Chevrolet Silverado was selling incredibly well during the first quarter until the Coronavirus forced dealers to close and the plants to shut down. 2020 Silverado light duty sales were up 33.6 percent over 2019 for the first quarter. Chevy’s most popular truck overtook the 2020 Ram 1500 in first quarter sales.

Dealers have complained that some of the popular trims and truck configurations have gotten difficult to find after the plants were forced to stop production in mid-March. Trucks are the most profitable vehicles for all of the Detroit automakers, which is why ramping up production is so important. GM has been very successful in restarting its plants without spikes in COVID-19 cases, so it is anxious to resume full production.

Steve wrote on May 29, 2020 - 5:30am Permalink
I'm guessing rural people are the main customers for this type of vehicle. We have always called them "utes" (short for utilitarian) in Australia since the 1930s when country folk they declared they wanted something to throw a sick animal or tools in the back of during the week and to be able to take ma and pa to church on Sundays.