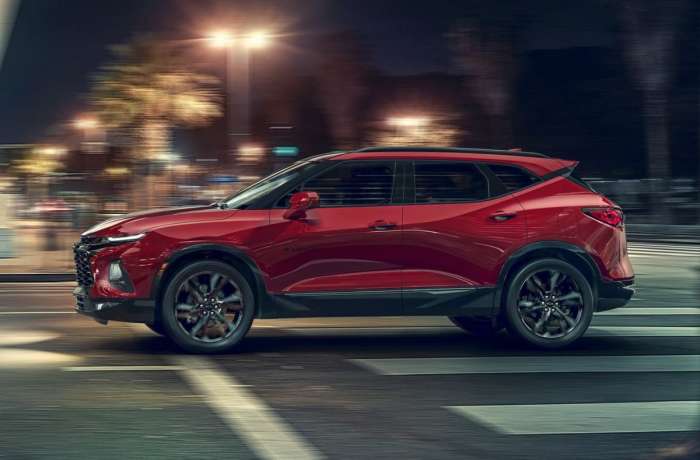 Chevrolet releases pricing for the new 2019 Chevrolet Blazer and it falls right around its competitors. Chevy is gearing up for a fight in the midsize crossover SUV arena.
Advertisement

Chevrolet intends to shake up the midsize crossover segment with its relaunched 2019 Chevrolet Blazer. The two-row SUV has been given a new look and ready to compete against other well-established vehicles like the Ford Edge, Nissan Murano, Hyundai Santa Fe Sport, and Dodge Journey. The 2019 Chevrolet Blazer is promising to offer a diverse set of trim lines to appeal to a wide ranging audience.

Crossovers and SUVs are particularly hot right now and the 2019 Chevy Blazer will go on sale in early January. It is priced to give its competitors a run for their money, starting at $29,995. That price includes destination but not taxes and dealer prep.

“The Blazer’s design offers customers a crossover that can exceed their needs, matching their unique personality,” said Steve Majoros, Chevrolet marketing director for Cars and Crossovers. “Blazer sets a new design language for Chevy’s crossover family and extends our momentum into one of the industry’s fastest-growing segments.”

The new Blazer comes in a totally different shape than previous versions. Many originally expected that it would be shaped much like the old Blazer, but the look is fresher and more progressive. It still holds a wide stance and each trim level is designed to appeal to a different personality.

The four trim levels are L, Blazer, RS and Premier. L is the most affordable. The standard engine is a 2.5L I-4 that produces 193 horsepower paired with a nine-speed automatic transmission. A 3.6L V-6 paired with a nine-speed automatic is also available as an upgrade. It gets 305 horsepower. The V-6 comes standard on the RS and Premier models. Fuel economy details should be released closer to when the 2019 Blazer goes on sale.

The RS is the sportier version with blacked-out trim and black mesh grille.

The Premier carries the more upscale appearance with chrome trim.

Standard features for all Blazers include:

Available Upgrades of The 2019 Chevy Blazer Include:

All of the automakers clearly believe that crossovers and SUVs will continue to be in high demand for the future. You can expect to see similar offerings from nearly all the automakers over a variety of price points.