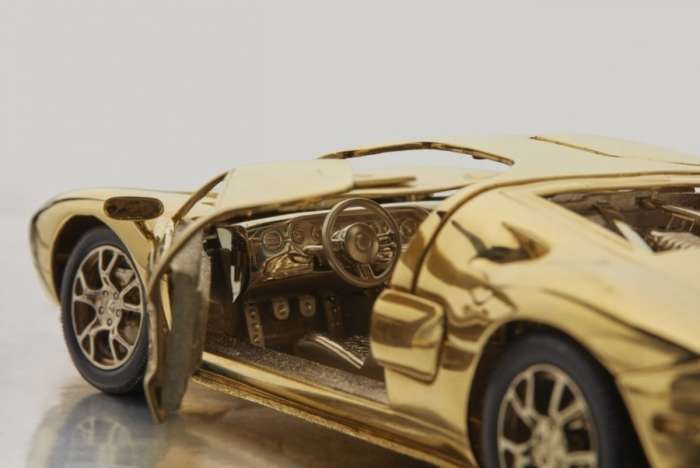 It may be tiny but this 18-karat gold Ford GT is expected to sell for more than a new Ford Mustang.
Advertisement

Sotheby’s Auction House is calling the 18-karat two-tone solid gold model of a Ford GT the ultimate gift. Bidding just opened and will remain open until December 3rd, 2018. According to Sotheby’s catalogue, the gold GT was the property of a descendant of Henry Ford. It is a 1/25 scale model of a 2006 Ford GT.

Ford introduced the Ford GT supercar in 2006 to pay homage to the incredible GT40 race car that cemented Ford’s standing as a force to be reckoned with on the race track. The GT40 was able to win the 24 Hours of Le Mans four consecutive times, starting in 1966. The three GT40s finished 1-2-3 at Le Mans in 1966.

When Ford initially sold the GT in 2006, it became a highly-prized collector car and the limited run sold out immediately. The Ford GTs are in high demand because there are so few of the supercars. Ford announced that it would sell 250 of the $450,000 vehicles in 2017 and 2018 model years. Would-be buyers had to fill out applications and agree to not only drive the cars but display them every now and again. Ford also required buyers to keep the supercars for a certain amount of time before selling them. The demand was so high that the company added a third year of production (2019) for people on the wait list who qualified but weren’t originally chosen. They also added a production run for 2020 for potential buyers who were originally rejected or new applicants. In all, fewer than 1000 of the 650 horsepower models are expected to be built.

The 18-karate gold model is described in the Sotheby’s catalogue as:

“Property of a Descendant of Henry Ford | Eighteen-Karat Two-Tone Gold 2006 Ford GT 1/25 Scale Model
Cast in numerous parts and intricately assembled, the 18-karat two-tone gold body of this 1/25 scale model encourages interaction from the admirer: open the doors, take a peek at the engine, and pop the hood to check out the spare tire compartment. This striking attention to detail is carried throughout the precious vehicle, from the rimmed rubber functional wheels to the Michigan Ford 1 license plate.“

The Sotheby's catalogue says “The Ford GT remains a landmark in the company’s history and this one-of-a-kind model is truly the ultimate gift for anyone with the need for speed.”

The car model is said to be in very good condition. It is visible that someone has opened the little car doors at the point where the door hinges rub against the body. However, they say that the tread on the plastic wheels remains fresh.

If you are in the market for a solid gold Ford GT, this may be your opportunity to buy one for less than 1/10 of the cost of a new real Ford GT.