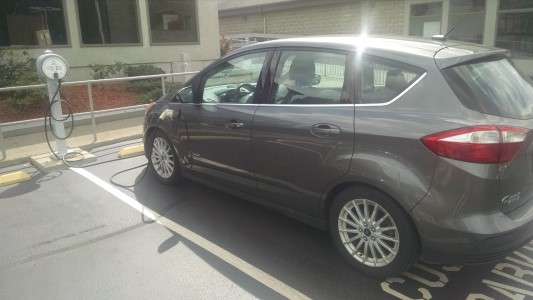 Ford Surprise Number 2 in Plug In Electric Sales in 2015

September sales are in for the major Electric Vehicle Manufacturers and many might be surprised at who is leading in the “cars with a plug” category. The number one market leader is Tesla with their Model S sales coming in the year to date at exactly 17,006 which includes the 6 Model X SUVs that rolled off the stage on Wednesday night during the launch party.
Advertisement

Despite being ranked 14th on InsideEvs.com’s list of Electric Vehicles, the Ford Focus Electric has sold 1,267 to date this year. That seems miles behind the Tesla S by almost a 16,000 difference. What is interesting is that the other Ford plug-in cars, the C-Max Energi, and Fusion Energi, have been doing much better They are ranked at number 7 and number 8 respectively with the Fusion selling 1,221 more than the C-Max. The Fusion sold 6,899 and while the C-Max sold 5,678 units YTD 2015.

If you group the Ford C-Max Energi, the Ford Fusion Energi, and the Ford Focus Electric together, the Ford family ends up number two behind Tesla in Plug-in car sales.

That may seem surprising that the number one selling electric car in the world – the Nissan Leaf – only comes in at number three in the USA sales race so far this year. Nissan has sold only 13,630 cars while team Ford has come in at 13,844. Ford is ahead by 214 Plug-in cars. Nissan has struggled this year and has not kept pace with their 2014 sales figures. Last year through September Nissan had sold 21,822 Leafs and so far this year they have only sold 13,630.

There is some very interesting positioning that has happened in this marketplace that deserves some mentioning. Since we are at a transition between the 20th century’s transportation fuel and the futures transportation fuel, electricity, Ford has strategically straddled the fence between the two. By producing an electric version of their Focus brand, they then added extra battery packs to the C-Max and Fusion hybrids in order to make them plug INS. They strategically gave the cars about ½ the USA a drivers battery electric range (20 miles of EV range and the average miles driven by a USA driver is 40 miles) while the Nissan Company gave the Leaf double the USA miles all electrically. The Chevy Volt PHEV came in at 40 miles of EV range which was an exact match. This was by design.

While Ford has dipped their toe in the EV water and gone the more traditional route by incrementally moving toward the fully Electric Tesla, they have provided the American Market with a competitive price point PHEV. This looks like it has been a success although not individually but more like a team effort.

If Ford took the lead and developed a 200+ Mile Range EV from the start, would they have been number one now and Tesla Number 2? I believe they would have the Nissan Leaf’s market share, the Chevy Volt’s Market share, and part of the Tesla’s market share, had they come in with a more competitive longer range EV first.

The company that does that will likely leap ahead and shake up this market.