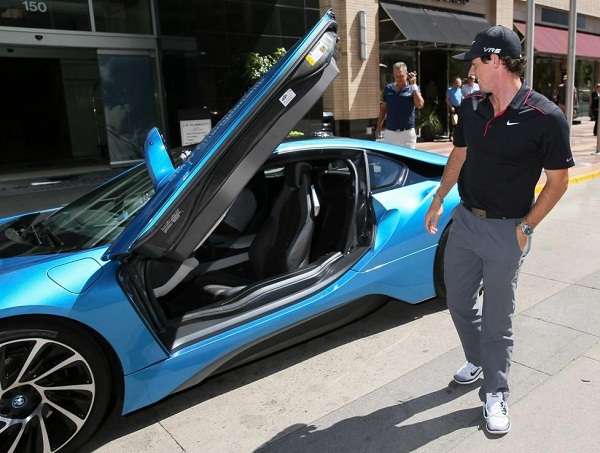 The life of the world’s best golfer is enviable in many ways. One such perk of being Rory McIlroy: BMW gives you special treatment at their tournament.
Advertisement

The 2014 BMW Championship tournament concluded at Cherry Hill Country Club in Colorado on Sunday, and Rory McIlroy didn’t win on the scorecard. But he did win with the plug-in hybrid i8 supercar he received from BMW for the week.

Rory finished tied for 8th at four under par, not up to his usual standards. However, he enjoyed a privilege offered to no other player: while BMW provided the rest of the playing field with a 7 Series to drive for the week in Colorado, McIlroy was given the futuristic i8 to reflect his status as the world’s best golfer.

The winner of this year’s British Open and PGA Championship, McIlroy has four major championships to his name and at only 25 years of age could eventually threaten the record of 18 major wins held by Jack Nicklaus.

His ride for the week, the BMW i8, is a plug-in hybrid sports car that has finally arrived after years of sky-high anticipation. Watch its three spine-tingling ad spots here.

The carbon fiber intensive i8 makes use of a deceptively potent 357 hp to race from 0 to 60 mph in under 4 seconds. It is powered by a mere 1.5 liter turbocharged three-cylinder mid-mounted engine, aided by an integrated electric motor and a separate 129-hp electric motor in front. It is the rare sports car that can be either eerily silent (in EV mode) or wicked loud, with an impressive exhaust note from the turbo three. The i8 can reach a top speed of 155 mph, and is capable of up to 22 miles of range in electric-only mode.

The i8 has drawn rave reviews and is now available in the United States, but you almost have to be as wealthy as Rory McIlroy to own one. The i8 comes with a $136,625 price tag, although one could have been had for free if any player nailed a hole-in-one on the 15th hole at Cherry Hill (nobody did). The rest of us can only admire from afar.

Toyota vs Tesla: Which Stock To Buy These Days
For Some Former Daimler Managers Daimler Is Authority, While Tesla Is Like a Startup
END_OF_DOCUMENT_TOKEN_TO_BE_REPLACED