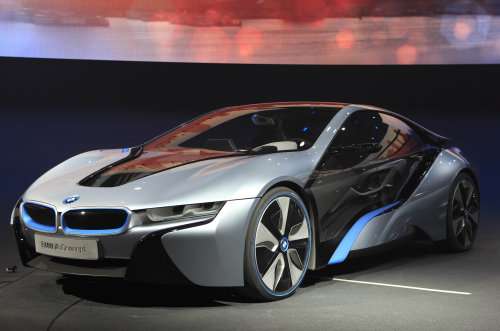 The BMW i8 makes its grand debut

This morning in Frankfurt, Germany, BMW unveiled the next generation of the fabled luxury brand with a pair of innovative new vehicles including the all-electric BMW i3 and the high performance i8 hybrid sports car.
Advertisement

While it is still being campaigned as a concept, the new BMW i8 shown above is as close to production form as a concept can be. This vehicle has been around for some time, sporting the name of the Vision EfficientDynamics Concept but as the German automaker pulls the sheet off of the latest version – the BMW i8 sports car is a reality.

The BMW i8 is a sports car in every sense of the phrase, with a sleek carbon fiber body offering an unmistakable look that has gained a great deal of popularity as the Vision EfficientDynamics Concept. However, it is what lies under the sexy skin that is the real story. The i8 is powered by a turbocharged 1.5L 3-cylinder gasoline engine that sends 220 horsepower and 221lb-ft of torque to the rear wheels; while an electric motor powered by a lithium ion battery pack sends an additional 349 horsepower to the front wheels. The i8 also features plug-in capabilities.

The BMW i8 uses an electric-only mode that will allow the driver to travel up to 20 miles without the aid of the gasoline engine – ideal for the city commute. Once you have exceeded the electric-only range, the 3-cylinder gasoline engine kicks in to extend the driving range of the hybrid sports car. Once driving in hybrid mode, the electric engine helps to provide maximum fuel economy but when you push the performance capabilities of the new BMW i8, the two engines work in tandem to provide high performance BMW excitement. BMW claims that this hybrid drivetrain allows the sporty i8 to rip from 0-62mph (100kmh) in under 5 seconds while reaching a governed top speed of 155mph when driven hard but when driven gently – the i8 offers fuel economy numbers of 3 liters per 100km. If you’re not up on your conversion rates…that equals about 78 miles per gallon…’wow’ is right.

On top of those impressive acceleration, top speed and fuel economy numbers, the BMW i8 is designed to yield a perfect 50/50 weight distribution – ensuring that this sports car provides handling capabilities to back up its sporty looks. While it shouldn’t come as any surprise that the new hybrid electric sports car from BMW accelerates and handles like a proper sports car but it might come as a surprise that the interior design offers enough room to seat four people..

The new BMW i8 does a fantastic job of showing that hybrids don’t have to be boring, egg shaped vehicles that are all function and no form. The car that began as the Vision EfficientDynamics Concept has evolved into the beautiful new BMW i8 hybrid sports car – the car that ushers in the next generation of the fabled BMW performance car.

Check out the video below from BMW, showing both the new BMW i3 and BMW i8.

chaceb wrote on July 29, 2011 - 1:03pm Permalink
yeah this will be in my driveway as soon as it hits the us...
Teri wrote on July 29, 2011 - 4:35pm Permalink
Ooooooooh pretty, I likee a lot. But in al reality could never afford in a hundred years unless, of course, I hit the powerball, then I'll be the first girl standing in line to get one.
Anonymous wrote on August 5, 2011 - 10:51am Permalink
The design of BMW has greatly improved over the years. The concept of this design really fits for a racing car. The <a href="http://www.racepages.com/">car parts</a> and features will surely surprise car fanatics.