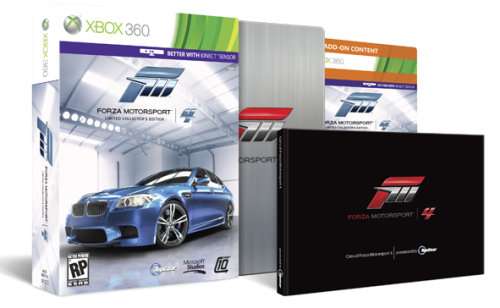 After the 2012 BMW M5 was formally introduced in public at the 24 Hours of Nürburgring, the folks at Microsoft introduced the new Forza Motorsports 4 Limited Collector’s Edition with the gorgeous new high performance BMW sedan serving as the cover model for the special edition of the next generation of the Forza series.
Advertisement

In addition to the 2012 BMW M5 covering the upcoming Forza Motorsports 4 Limited Collector’s Edition, those who snap up these special editions of the game will get the new M5 for use in the game – a unique feature to the Collector’s Edition. Forza 4 Limited Collector’s Edition also includes 3 DLC (downloadable content) car packs, a special group of custom designed BMWs, “Cars of Forza Motorsport 4 Presented by Top Gear,” a 96-page book written by the editors of Top Gear, a handful of vinyl decals, VIP Membership status, an and exclusive BMW theme – all packaged in a steel case wearing the Forza logo.

The 3 DLC packs are the VIP Car Pack, the Ship Bonus Car Pack, and the Classic American Muscle Cars Pack. The VIP Car Pack includes the 2011 Bugatti Veyron Super Sport, the 2011 Ferrari 458 Challenge, the 2011 Lamborghini Gallardo LP570-4 Superleggera, the 2010 Noble M600 and the 2011 RUF RT12 R. The Ship Bonus Pack includes the 1965 Ford Mustang GT Coupe, the 2011 Koenigsegg Agera, the 1997 Lexus SC300, the 2011 RUF RGT-8 and the 2011 Tesla Roadster Sport. Unfortunately, the folks at Turn 10 and Microsoft are keeping us waiting to know exactly which American Muscle Cars are included in that pack – but with ten cars, the Limited Collector’s Edition comes with 20 cars in these 3 DLC packs.

The Limited Collector’s Edition also includes a BMW custom designed pack, which is set to include a user-designed BMW M6 Coupe, and while Turn 10 promises other vehicles in that pack they have not specified how many cars it includes. Car packs are usually 4 or 5 cars so when you consider the 3 DLC packs, the BMW pack and the use of the 2012 BMW M5, buyers of the Collector’s Edition Forza 4 will start with somewhere in the area of 25 cars that buyers of the regular game do not have. This is in addition to the book and unique packaging which will prove to be enticing to hardcore gamers. Also, for those unfamiliar with the Turn 10 VIP membership status, while I cannot say what that privilege will include for Forza 4, I was a VIP for Forza 3 and from time to time, the game creators send out unique vehicles (for free) to VIP members. It’s a very cool perk.

Of course, all of these items don’t come for free and the MSRP of the Forza Motorsports 4 Collector’s Edition is $79.99 - $20 more than the normal Forza 4 came. However, when you consider the price of buying each one of these items after buying the “regular” version of Forza Motorsports 4 – this Limited Collector’s Edition is a wise purchase. As a matter of fact, I pre-ordered mine last night and while Microsoft and Turn 10 haven’t said just how limited these Collector’s Editions will be…I wouldn’t wait too long if you want to get your hands on this special edition.

Microsoft and Turn 10 promise that this will be a game that will “push the racing genre in brand new directions” and it’s going to be awfully hard to wait until Forza 4 hits stores on October 11th.

Image courtesy of Microsoft and Turn 10

LG's New EV Battery Plant Is a Welcome News for Tesla
Tesla Giga Berlin's New Hurdle: It's Not Only the Gov't, but Now Tesla Itself
END_OF_DOCUMENT_TOKEN_TO_BE_REPLACED