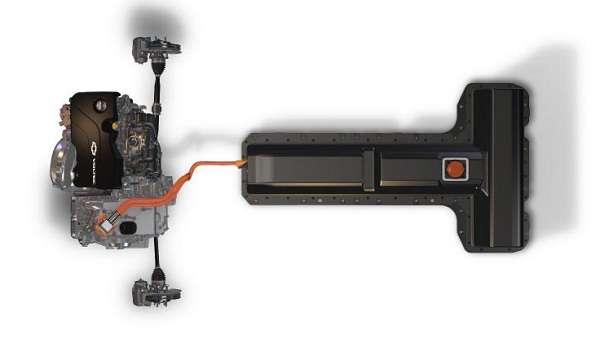 2016 Chevrolet Volt is better in almost every way, but two crucial unknowns remain

GM has said that the second-generation Volt set to debut at the North American International Auto Show in January will be better in every way. After today’s press event detailing many of the impressive changes in the 2016 Volt, two major questions are still unanswered.
Advertisement

When General Motors created the original Chevrolet Volt, the car was hailed as a technological marvel. If anything, it was criticized for being over-engineered. After a press event in Michigan today, it appears that GM has outdone itself: the 2016 Volt will indeed improve upon the excellent outgoing model in almost every way.

When GM set out to redesign the Volt, the automaker relied heavily on suggestions and criticism from its enthusiastic owner base. The most common complaints included the desire for more all-electric range and a fifth seat. Many praised the Volt because the gasoline engine does not intervene under hard acceleration below highway speeds – drivers who have experienced all-electric acceleration don’t like it when a combustion engine interferes with the smooth, instant response. Some owners wanted more performance.

“By putting our Volt owners at the center of what we do and leveraging our electrification engineering leadership, we’ve been able to raise the bar and will exceed their expectations with the new Volt,” said Alan Batey, head of global Chevrolet.

GM indeed did not respond to the feedback with minor changes, but made significant improvements to nearly every aspect of the powertrain to meet the demands of Volt owners. The main goals were improved performance and efficiency, and GM seems to have delivered.

Gains in performance and efficiency

Low-speed acceleration in the 2016 Volt is boosted by 20%, which will translate to a significantly quicker 0-60 second time than the current model’s 8.5 seconds. This is because the new Volt’s two electric motors can now work in tandem for an added acceleration boost at low speeds, whereas the original Volt only used both motors in traction together at high speeds in EV mode.

Though no specific power outputs were given, Chevrolet executives acknowledged that the power ratio between the two electric machines will be similar. The smaller motor has been redesigned to eliminate the need for rare earth metals, not an insignificant achievement.

GM also claims a 5 to 12 percent efficiency increase in the Voltec drive unit, partly due to a new inverter that is integrated with the transmission and is smaller, lighter, and more efficient.

The efficiency gains do not stop there: the next-generation Volt will get a new and more frugal range-extended engine. It is not the turbocharged 1.0-liter three-cylinder that many had expected, but rather is a naturally aspirated 1.5-liter four-cylinder.

It will certainly be quieter than a turbo three would have been, but that’s not all. The move to a slightly larger engine will allow GM to adjust valve timing to run the gasoline engine close to the Atkinson cycle, which many hybrids use for its efficiency advantages. (The current Volt’s 1.4-liter engine uses the less efficient Otto cycle.)

The dino-burner will employ two additional technologies unique to the Volt application: a 12.5:1 compression ratio, higher than standard versions of the engine, coupled with cooled exhaust gas recirculation (EGR). The combination of these two technologies improves efficiency while allowing the Volt to switch from premium to regular gasoline, an important distinction.

All of the aforementioned upgrades will help boost the fuel economy in range-extended mode, which is a relatively pedestrian 37 MPG combined on the current model. But it also appears that the new Volt will be lighter, which will aid fuel economy and range. The drive unit will be 100 pounds lighter, while the battery will shed an additional 30 pounds.

What about that battery?

Mary Barra summarized the new and improved battery pack neatly: “[The new battery] will store more energy with fewer cells that will go further between charges.”

The new LG Chem cells get a 20% increase in volumetric energy density over this year’s battery. Larger, more energy-dense cells cut the number of cells from 288 to 192 in the new pack, which is similar in size and shape but 30 pounds lighter than the outgoing model.

It was also confirmed that the new battery has greater capacity and will use more of it than the conservatively engineered 17.1-kWh pack on the 2015 Volt.

Two of the most important unknowns remain

GM went to great lengths to address the main concerns of Volt owners, but what about the concerns of those who would like to own a Volt but can’t afford one, or who need a vehicle with a fifth seat?

To that end, we still do not know the price of the 2016 Volt and it remains unclear whether or not it will come with five seats.

The current Volt starts at $34,170, and many are hoping that price drops significantly with the next-generation model. We will not find out until sometime next year, but expect a modest decrease in sticker price despite the larger battery. GM has been focused on cutting costs from the Volt and will at last be using next-generation battery cells from LG Chem – not only will the 2016 Volt use roughly 2/3 the number of cells, but they will likely be cheaper than the outgoing technology.

As for the all-important (to some) fifth seat, on a Volt Facebook chat GM said they could not comment on the fifth seat or lack thereof for about 10 weeks. In other words, wait until the big reveal in January at the North American International Auto Show in Detroit.

We anticipate that there will be five seats, but it will almost certainly be a very uncomfortable fifth seat. That really doesn’t matter that much, though, as most owners will rarely use it.

Official EPA range and fuel economy numbers will also have to wait until the Detroit auto show in January. If we had to speculate, we think the all-electric range will end up just shy of 50 miles while fuel economy will improve close to 45 MPG combined. The final results will no doubt be awaited eagerly, and the new Volt cannot come soon enough.