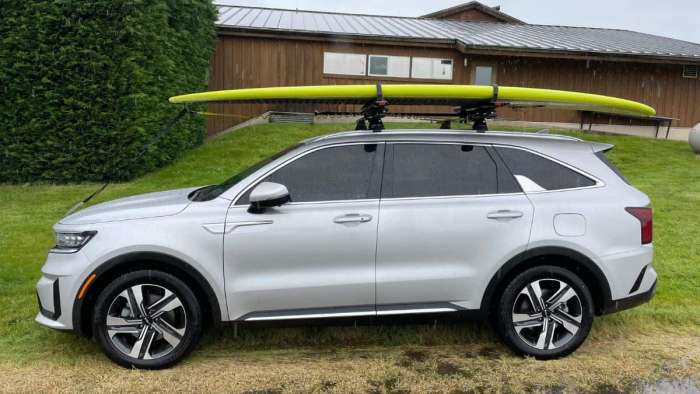 Things That Bug Me About My 2022 Kia Sorento PHEV

I love my 2022 Kia Sorento Plug-In Hybrid (PHEV), but even so, there are a few things that bug me about the way Kia has implemented this otherwise fantastic vehicle. Note, I am calling these things out in the spirit of objective feedback (in the hopes someone at Kia might make improvements in future iterations and or software updates) and in support of the owner community that I frequently interact with on social media.
Advertisement

Here’s a run down of the relatively minor things that bother me about my Sorento PHEV. First, though relatively minor, I find it annoying that Kia does not include more information about my driving patterns in its various displays and cumulative info screens. Specifically, I would like to know for any given drive at least (if not cumulatively since mile 0) how many miles have been driven on electricity versus gasoline. To be honest, I don’t know that many plug-in hybrids show precisely this information, cumulatively or otherwise, but my Chevy Volt at least showed it per drive and if the Kia could do at least that much, I’d be satisfied. It shouldn’t be terribly difficult for Kia’s software teams to calculate and display a total, cumulative split of miles on battery vs miles on gasoline. Kia must realize that a significant number of customers that buy PHEVs are data nerds and keenly interested in knowing just how much or how little they are burning gas (or so my selfish, me first, you must not really be Gen X personality tells me). Granted, one can roughly estimate these things by using the following 3 screens that Kia does provide.

First the Accumulated Info screen shows you, for up to the last 9,999 miles, what your accumulated MPG is. The higher that number is, the more you’re driving on electricity. After 4,348 miles I have driven approximately 55% on electricity (I keep my own log; did I mention I’m a data nerd?), and my MPG in the Accumulated Info screen is about 65 MPG. That is after multiple long road trips earlier this year; just before I started that series of long trips my MPG was 110 and 73.5% electric, so if you have a number north of the upper 50’s MPG in this screen, you may be driving on electricity at least 50% of the time, and over 100 MPG should mean 70% or more. 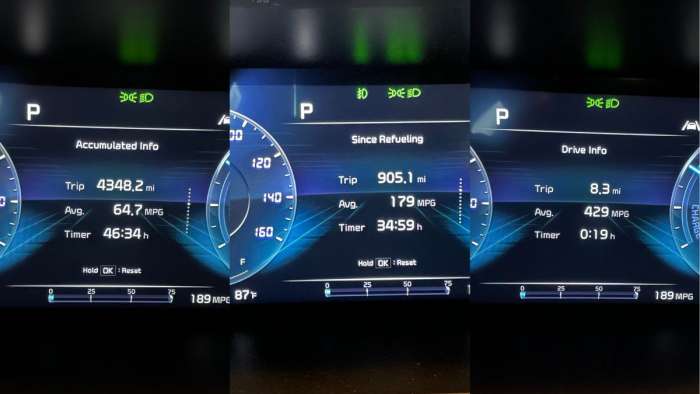 For either your current drive, or since the last time you filled your gas tank, the Drive Info and Since Refueling screens, respectively, will give you an idea of how much of your driving has been on electricity vs gas more recently. In Drive Info (which resets every time you turn the car off) if the Avg MPG value is 999, that means you are driving on 100% electricity. In the Since Refueling screen, the same is true, however eventually the Sorento PHEV has to burn some gas either for fuel maintenance or simply because you have exhausted the battery. So any number less than 999 means you have driven on gas at some point, and the higher the number the less the gas powered distance, since refueling/turning off the car. Whew! Confused yet? It’s a lot to keep track of and Kia should really just make it easier on us, or at least on nerdy number crunchers like me anyway! Note, apparently Kia resets the Accumulated Info figure at 10k miles (or kilometers too, I assume) and so one needs to keep track of that figure elsewhere and then average it over time, if you want full history.

What else bugs me? It’s a pretty short list really, because overall the Sorento PHEV is just a fantastic sport utility vehicle capable of outstanding fuel efficiency given its size and weight. I wish the hybrid battery was a little larger (16-18 kWh) so that it could better support: a more powerful electric motor (120-140 ponies would be nice, instead of 90; who doesn’t love ponies!), more EV miles, and a “deeper” pedal travel to make it easier to keep it in EV mode. Also, I would appreciate a little different throttle mapping, or some other adjustment to the transmission/gearing to avoid the throttle hesitation that often happens when slowing down to a near stop, but not stopping fully. Coming to a full stop before pressing down on the accelerator seems to bypass this issue, and that’s great, but not in traffic and especially on hills. This hesitation makes it easy to kick the PHEV’s gas motor on and creates more “rubber banding” as suddenly the electric motor puts out its max output and the vehicle lurches forward but may roll back before doing so.

What about you? Have you driven the Sorento PHEV? Do you have any peeves toshare? Any feedback for Kia you wish they’d listen to? Leave your responses or questions below.

Juan David Rojas wrote on July 31, 2022 - 7:49am Permalink
Hi Justin, I live in Canada and was lucky to get my PHEV in November, so I drove it sub 0 conditions. I'd like for Kia to improve the way the Sorento behaves in/handles cold weather: even though most of my daily driving is slow (within neighborhoods) the ICE gets fired up to warm up the engine just in case I suddenly need the power, translating into a not so great gas consumption. So basically add a heat pump or a driving mode that overrides the need to heat the ICE. Thoughts?
R Kurtz wrote on August 4, 2022 - 10:26pm Permalink
I'm interested in your comments and Justin's response. I just ordered the phev Sorento, and being a new product, no dealer people knew, nor were Kia's information clear on EV mode driving. I assumed I'd be able to drive until the battery discharged before the ICE would start, but you're saying that it will start randomly while in EV mode. Also that there is only the ICE to heat the cabin in our NY winters. This is not good, and I'll likely cancel my order. On my 20 mile daily run, if the ICE has to run a few minutes for cabin heat in winter, also apparently on the long hill I have that you say the electric motor may not be strong enough for, then what's the point of saying it's a 33 mile range ev. Plus it seems like the ICE may not get warmed up enough in winter in my driving cycle to prevent the exhaust condensation and its associated issues. Can you, or you Jason, confirm?