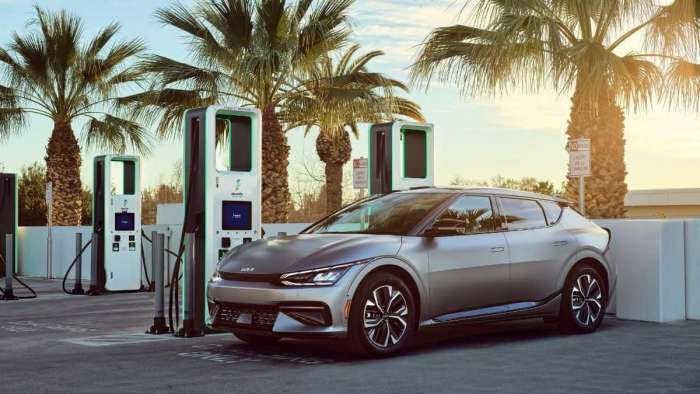 Kia’s total February sales increased 2.3% year over year. That may sound like only modest growth. But it is important to note that last month Kia’s 2 EV models, the brand new EV6 and the returning Niro EV, also beat their previous best ever month, September 2021, by 181%.
Advertisement

According to Kia, in its first month on sale in the U.S. the EV6 sold 2,125 units (and note, not only is February a short month, I don’t believe it was technically a full month of sales either as the first deliveries may not have happened until a few days in). If Kia can sustain, or increase, those kinds of plug-in vehicle sales numbers throughout the year, Kia alone will easily outsell the combined Hyundai and Kia plug-in vehicles sales from last year. A 30-60k volume for the EV6’s first year on sale in the U.S. looks attainable, so far, assuming Kia can produce enough. The demand certainly seems to be there, despite significant dealer markups becoming common, with some as high as $25k over MSRP being reported.

Sales of the Niro (in all three of its forms, HEV, EV, and PHEV) were up 132% year over year as well. While Kia may not sustain that kind of year over year growth for the Niro models throughout 2022, with the completely revised 2023 Niro going on sale later this year, Kia is very likely to see significant sales growth for the Niro and easily surpass its 2021 sales of a little over 26k. Kia also confirmed that electrified vehicles (including HEVs, PHEVs and BEVs) now make up 13% of their total sales volume which would equate to only a little over 91k vehicles at year end if Kia’s 2022 sales figures turn out to be exactly the same as 2021. Of course that is highly unlikely, but it is useful as a reference point I think for projecting the combined sales of the EV6, Niro plug-in models, and the Sorento and Sportage PHEVs. Previously I estimated that Kia may achieve close to 100k plug-in sales this year. As long as the raw materials shortages coming later this year due to Russia’s invasion of Ukraine don’t derail things for Kia, that possibility is looking more likely given Kia’s success with the EV6, Niro, and its other PHEV growth slated for this year.

Other positive year over year sales news for Kia in February includes: a 132% increase in Carnival sales (which is due to the fact that the Carnival was on sale for less than a week in February 2021, having debuted on the 23rd), a 47% increase in Stinger sales, a 15% increase in Telluride sales, a 10% increase in Forte sales, and modest single digit increases for the K5 and Soul. Kia’s Rio, Seltos, Sorento, and Sportage all saw sales declines though, year over year, with the Sportage and and Seltos both seeing very significant double digit decreases.

Extending the positive news to include Hyundai’s February results paints an even rosier picture for the sibling South Korean brands. In February, Hyundai’s “eco-friendly” vehicle retail sales increased 278%, similarly helped by Hyundai’s new EV model, the Ioniq 5, and we can assume the continued availability of the Kona EV, other Ioniq and HEV models, and the PHEV versions of the Santa Fe and Tucson. In terms of competition from other mainstream manufacturers, Kia and Hyundai are showing better trajectories than Toyota and Ford, the two companies most likely to challenge them for runner up to Tesla this year with Toyota’s sales down 11% and Ford’s down 21%. In terms of plug-in vehicles, Ford’s in demand Mustang Mach-E sales were down 46.5% year over year, due to the ongoing semiconductor shortage. This means production problems are going to continue for Ford in the coming months, and likely get worse, given the additional supply chain pressure caused by the war in Ukraine. As such, it seems increasingly likely that Ford is going to miss its plug-in vehicle sales goals for 2022. But we’ll have to wait until the first quarter is over to get more stats on Toyota, Ford, and other manufacturers that may compete with Kia/Hyundai for the runner up spots to Tesla’s lead position in plug-in vehicles sales in the U.S.