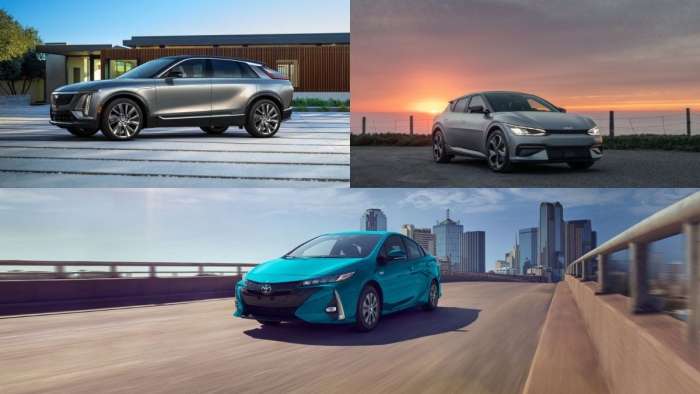 After Tesla and Ford, GM had the best selling fully electric vehicle in the U.S. in 2021, the Chevy Bolt, at 24,803 combined for the two different models (EV and EUV). Thus, GM has set a precedent and may be able to compete for one of the top spots in 2022 BEV sales too, depending.
Advertisement

Yet, while GM’s standings in last year’s BEV sales race gives them a good position at the start of this year, this does not mean GM will be able to hold onto, much less advance, its standings in the plug-in vehicle sales race. In fact, I should point out here that since I am actually talking about sales of all plug-in vehicles combined (BEVs + PHEVs), Toyota actually bested GM and Ford with 52,749 plug-in vehicles sold, according to InsideEVs, and thus is the actual 2nd place finisher for 2021 plug-in vehicle sales in the U.S. In Toyota’s case though, their sales were all PHEVs, specifically the Toyota Rav4 Prime and the Prius Prime plug-in hybrids. Kia and Hyundai’s combined 2021 U.S. plug-in vehicle sales, which I estimate at a little less than 30,000 combined, may also have been greater than Ford or GM’s, though still less than Toyota’s.

In 2022, GM will continue to struggle with the impacts of a battery recall on its mass market EV (the Bolt) and it’s only other plug-ins for sale this year, the Cadillac Lyriq and the GMC Hummer EV, are both priced in the premium/luxury range, far above the budgets of the average shopper (for reference, the Lyriq, which is the cheaper of the two, starts around $60k). While GM will certainly produce and sell as many of these EVs as it can, given the battery constraints, the ongoing supply chain and semiconductor issues, and the price points of its new products, I predict GM will likely end up in the lower half of the top 10 manufacturers in the U.S. plug-in vehicle market for 2022.

That said, I think 2023 forward will be a very different scenario for GM, as they are planning to deliver 400k EVs through 2023 which, if that proves true, my pessimistic view of GM’s 2022 sales volume may substantially miss the mark. But I don’t think I will be too far off in my estimates and that 2023 is the year when GM might be making the majority of those 400k EV deliveries, assuming they can ramp production fast enough. I predict GM, at best, will only be able to increase their 2022 U.S. BEV sales by a few tens of thousands over 2021 levels (noting that GM also doesn’t sell any PHEVs in the U.S. anymore). They have a huge number of Bolt EV battery packs to replace and such large battery packs are needed for the new Cadillac and Hummer EVs that their growth will be constrained by battery cell availability more so than other manufacturers.

As such, I predict Kia (alone) will outsell GM in 2022 plug-in vehicle sales and, especially if we combine Kia and Hyundai models, may also outsell Toyota this year. This is because Toyota will have difficulty dramatically increasing its production of plug-in vehicles in the near term due to limited battery supply. To be more specific, I estimate Toyota will sell around 70,000 plug-in vehicles in the U.S. in 2022, while I predict Kia could sell about that much or more, depending, and Hyundai around that much again. This is why I think the top three plug-in vehicle makers in the U.S. market for 2022 will be Tesla (for certain) and either Ford or Kia/Hyundai in 2nd and 3rd place with Toyota having the next largest volume. It will all come down to how many BEVs and PHEVs Ford and Kia/Hyundai can make given their respective more aggressive growth plans. What do you think?

Images from Kia, GM and Toyota.