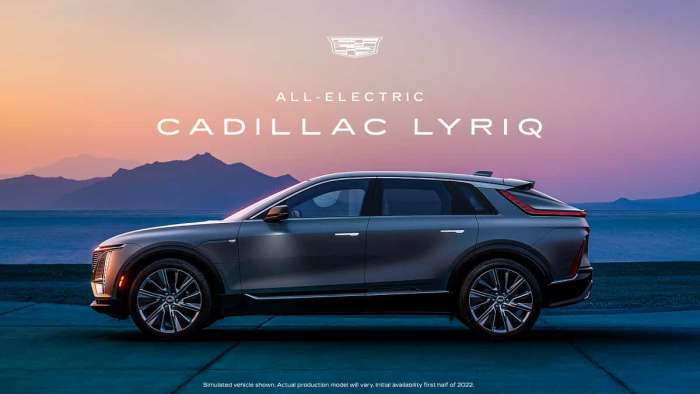 General Motors’ Cadillac Lyriq was posted for reservation and almost immediately sold out. So why do we need EV tax incentives?
Advertisement

As U.S. lawmakers debate how much taxpayer support to throw at electric vehicles in their next tax bill, electric vehicles of all brands are selling out before they hit dealer lots. The most recent example of this long-running trend is the upcoming 2023 Cadillac Lyriq electric vehicle. This new luxury wagon/crossover was posted for pre-orders, or registration, or whatever you want to call it when a person orders an imaginary new EV and gives a company money to pretend to hold the spot for them.

By multiple accounts, or many publications re-reporting slightly differently the same initial report, the new EV from GM sold out about as fast as the online pre-order, reservation, or paid wish list system could accept EV shoppers’ money.

To help clarify the situation, GM issues this press release from Rory Harvey, vice president, Global Cadillac:
"Today, reservations for the 2023 Cadillac LYRIQ Debut Edition sold out in just over ten minutes and we continue to see a lot of enthusiasm around the brand – both current product and in our all-electric future. The initial response for LYRIQ has been extraordinary. Since the show car unveiling last year, more than 200,000 people have expressed interest in learning more about the vehicle and our electric future. The opening of reservations for the 2023 Cadillac LYRIQ Debut Edition represents just the beginning of Cadillac’s journey to become an industry-leading, all-electric luxury brand. While 2023 Cadillac LYRIQ Debut Edition reservations are full, more vehicles will be available to order through the Cadillac dealer network starting summer 2022. I can’t wait to share even more about our future EV lineup next year.”

This immediate sell-out of a future EV no consumer has ever tested is not unusual in any way. Tesla generally boasts about the number of vehicles it sells before it actually builds them. Neither Tesla nor GM shoppers receive any federal tax incentives to help reduce the cost of the EVs they purchase, or reserve, or whatever you prefer to call it. So why would more such corporate welfare be needed?

One answer would be that the world needs a low-cost EV available to the masses. That answer would seem valid, except that the Chevy Bolt was costing consumers - without federal tax incentives - under $20K new earlier this year. That was before the Bolts started to burn up in driveways and were pulled from the market. Recent reports say they are coming back.

We could post more links (like this one about a future Tesla) highlighting EVs that do not receive consumer-facing price supports "selling" by the hundreds of thousands before they are even built. But we assume the reader gets the point. Feel free to make your case in the comments section below on why products that sell out years before they are even produced need price subsidies.

DeanMcManis wrote on September 27, 2021 - 12:54pm Permalink
We really need federal and state incentives to promote EVs because they still make up less than 5% of new vehicle sales nationwide. I think that the subsidies are even more important for new car leases, to get prices down to the level where a first time car buyer can get behind the wheel of an EV. New tax subsidies will likely have a cap limit of $40K for new EVs, so it's far from supporting rich people with our tax dollars. Always new models will sell quickly at a higher price. I like the Lyriq. And especially because it will start out around $60K No doubt these first models will cost much more, being the first ones available. i do however think that it's shady that GM doesn't say how many Lyriq EVs are in this first batch of sold out models. GM also did this with their GMC Hummer EV, that was also sold out early. but they could be sold out at 1000 EVs, or 50,000 EVs, we don't know. Regardless, having strong interest and sales of the Lyriq is good news!
jg wrote on September 27, 2021 - 11:50pm Permalink
We need incentives capped by income so “the masses” can hop on the EV bandwagon instead of just those that can afford a car the price of a house in some parts of the country. Maybe incentive amount can even be driven entirely by income.