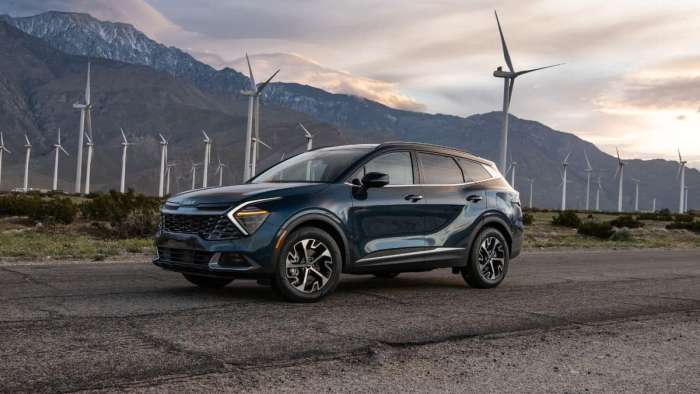 While reading an article from Fox News that asked, while the Sportage is a “very good vehicle… is it 30% better than list price good?”. I feel it is worth researching how much Kia dealers are marking up the Sportage. While I don’t know for certain if the information I found includes markups on the hybrid version of the Sportage (one of the most fuel efficient hybrid SUVs on the market), I do know that it doesn’t include any plug-in hybrid Sportage information (because they don’t seem to have gone on sale in the U.S. yet, as far as I can tell). Still, I think it is safe to assume that at least some of the markups reported are for the hybrid version, as Fox News’ article calls out. If Fox’s statement holds true, that would mean markups of approximately $8,500 - $11,250 are common. This may surprise absolutely no one, but frankly I find it shocking and rather unscrupulous and I’d like to do something, even just a little thing, to help empower those looking to purchase their next vehicle.

First I looked at some Kia forums to see how much people might be getting upcharged by dealers. In urban areas across the country, I saw people claiming significant markups, but most were less than the 30% Fox News claimed. This drove me to do more research and I went to markups.org and searched for Kia Sportage markups specifically. 57 results from across the country gave me a decent data set to work with. Here’s what I found: 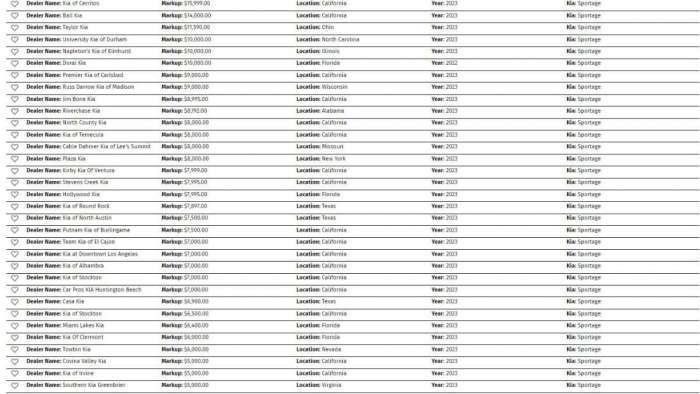 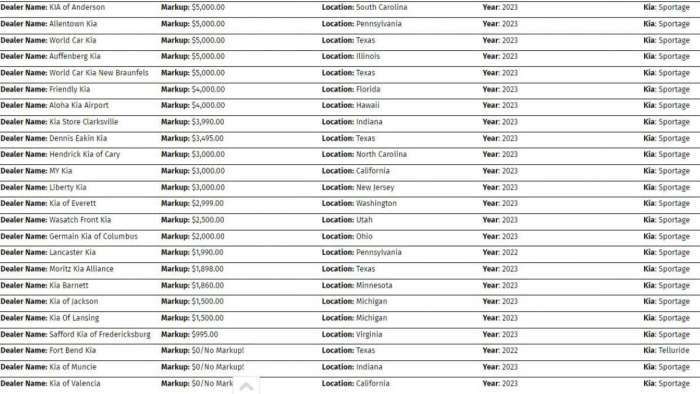 Fox News wasn’t that far off! Two California Kia dealers and one in Ohio had markups higher than Fox News’ estimates for starters (at nearly $16,000 for the largest) and only 3 dealers out of 57 were not charging a markup (one each in Texas, Indiana, and California). Interestingly, all but 10 of these dealers were charging a markup that was less than the low end of Fox News’ 30% estimate though, so the majority of dealers being called out were at least a little less greedy. The average markup charged by these 57 dealers was $5,934.45 (or $6,270.36 if we exclude the 3 dealers with no markups). The median markup charged by these dealers was $6,200 (or $6,500 if we exclude the 3 with no markups). $5,000 was the most frequently charged markup amount, with 8 dealers of the 57 charging that amount. California had the most dealers on the list at 19, only one of which wasn’t charging a markup, followed by Texas at 8 with one also not charging a markup. 21 states were listed in the report, and though that doesn’t mean the state you live in might be populated by more scrupulous dealers who are not charging markups, it may suggest that states absent from the list have lower occurrences of markups (or lower dollar markups) as the data appears to be fully self-reported. People who aren’t getting dinged as frequently or for as much may be less inclined to go through the trouble of creating an account and uploading their information, afterall.

But what are car shoppers to do? Here are one journalist’s thoughts, for whatever they are worth: 1. Keep the car you’ve got going another year or two (the situation may improve in the coming year as supply chain issues work themselves out, hopefully); 2. Look for better/fairer priced alternatives (though that may be a challenge, perhaps a used model might get you through the next few years?); 3. Consider making other choices that would mitigate your need, or desire, for a vehicle that is demanding such steep markup (consider a smaller, less popular or lower priced vehicle, downsize your needs for cargo or hauling, try car sharing/renting a vehicle only when you need it, etc.); 4. Finally, review the list of dealers in your region that are not marking up (or as much) on markup.org and reach out to them, perhaps making a long trip to fetch your new ride into a vacation or visit with far flung family or friends.

Image provided by Kia and markup.org.