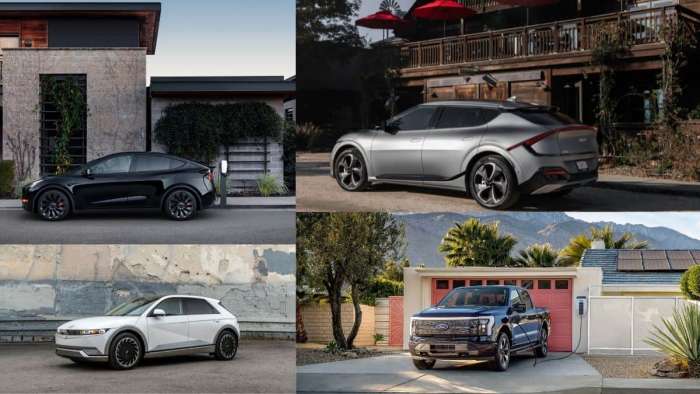 Beginning earlier this week, Ford is halting production on 3 different production lines, including the Cuautitlan, Mexico plant that produces the Mustang Mach-E electric vehicle. Is this only a brief pause, or is it the first sign of an impending miss for Ford as it attempts to massively ramp up EV production to compete with Tesla and out-sell other mainstream rivals vying for leadership in the race toward an electrified automotive future?
Advertisement

According to InsideEVs, Ford’s stoppage is due to ongoing semiconductor shortages and Ford will also idle production lines that make some of its most popular SUVs as well as the F-150. As such, this seems to be a major issue (if the stoppage is for a lengthy period of time or is the start of a pattern) given that the F-150 is Ford’s best selling model and one of its most profitable, too. Time will tell how long the stoppage lasts, or if it will be the only one. But this raises some questions: Will other automakers experience the same issues, to the same extent? Why might other automakers fare better or be less impacted?

As I called out in a previous article, Kia and Hyundai have closer ties to South Korean chip manufacturers and, so far, have been better able to secure semiconductor supply than some other automakers. As long as that continues to be the case, Ford’s production halts are definitely an opportunity for Kia and Hyundai to gain market share from Ford in the plug-in electric SUV market. Other automakers, VW specifically as pointed out in the InsideEVs article above, are already indicating that the semiconductor shortage is likely to impact them until at least the second half of 2022. Similarly, the only other manufactures that offer/plan to offer competing mainstream plug-in electric models (in any significant numbers) in the U.S. this year: Toyota, Nissan and to a lesser extent Mitsubishi, GM and Stellantis have pointed out either current/recent shortages of semiconductors impacting their production numbers or the possibility of impacts later if supply shortages don’t improve. So again, if Kia and Hyundai manage to secure more semiconductor supply than other automakers, it will benefit their sales.

Another automaker has also been less affected by the semiconductor shortage: Tesla. But Tesla’s situation has less to do with their relationships with chip manufacturers and more to do with their adaptability, the more modern chips they have chosen to use, and manufacturing choices they made well before the current supply chain issues came into play, according to the New York Times and Barron’s. The decision to outsource less expertise in software development (software that can be re-coded fairly quickly to run on different chips when those Tesla normally might use become unavailable), in fact, was widely criticized by others in the industry since the trend has been to outsource. But for Tesla this has become a secret to their success during the supply chain chaos induced by the global pandemic. Many other automakers are now scrambling to set up more in-house control over things like software development. Of note, those same scrambling automakers also outsourced their chip procurement, which has further hurt them by lessening their bargaining power with manufacturers. Tesla also has more efficiency, or simplicity, in its model lineup (with only 2 models making up the majority of their sales) and a smaller supply chain than other automakers, which certainly doesn’t hurt Tesla as it optimizes production around shortages. However, that could change as Tesla ramps up production at its new sites in Austin, TX and outside Berlin, Germany.

Do you think Ford will be able to keep a top three spot in plug-in vehicle production/sales in 2022, or might their production numbers for the Mustang Mach-E, F-150 Lightning, and Escape PHEV be much lower than planned? Will it mean Tesla and Kia/Hyundai take the top spots due to shortages for Ford and others? It’s too early to tell, I think, but this makes for a very interesting start to 2022. Stay tuned!