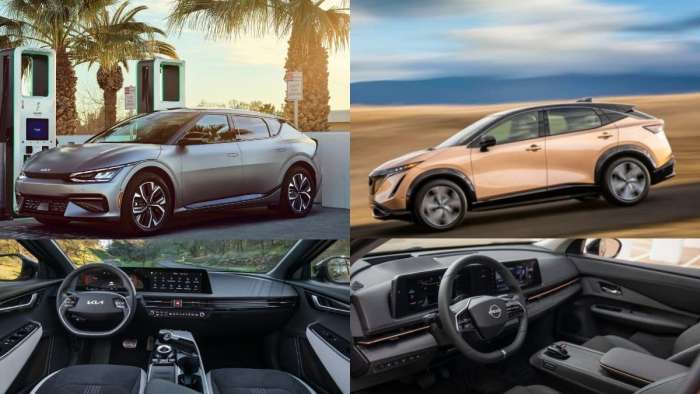 How do the Kia EV6 and Nissan Ariya compare, specs wise? Are they comparable vehicles? Is one more likely to be a sales hit? Let’s take a few moments to ponder the two, on paper, focusing on a few of the features that may matter most to potential buyers.
Advertisement

I was inspired to write this piece after driving home from the big box store today in my Sorento PHEV after I ended up behind a Kia EV6 on the freeway in heavy traffic. I noticed some obvious characteristics about the EV6 that may lean toward the less desirable, in terms of the form factor of the EV6 as a crossover vs. a more traditional SUV. These characteristics are, at least: ground clearance or ride height and cargo volume. Let’s start with those. The Nissan Ariya will have some kind of ground clearance of course, but I can’t find a published figure yet as it hasn’t gone on sale (at least in the U.S.). From photos though I would guess it is on the lower end between 6 to 7 inches (similar perhaps to the Tesla Model Y). The EV6 also doesn’t seem to have a published ground clearance figure yet, even though it is on sale and has been for awhile. I found reference to the EV6 having up to 10” clearance with an adaptive air suspension but that feature isn’t listed on Kia’s specifications so unless it is an after market modification (certainly a possibility), that isn’t its standard height. As far as I can tell from reviewing forums where people have asked the same question, the EV6 has a ride height of around 7 to 8 inches. So it looks like perhaps the EV6 may have a slightly higher ride height than the Ariya, but I imagine they’ll be close. When it comes to cargo volume, the Arriya is on the lower end of standard for a vehicle in its class and has 22.8 cubic feet of cargo space behind the rear seats or 59.7 cubic feet with the rear seats folded, according to Edmonds.com. The EV6 has even less cargo space, overall, at 50.2 cubic feet with rear seats down, but slightly more with the rear seats up at 24.4 cubic feet according to U.S. News and World Report.

Since we’re comparing EVs, let’s talk about battery size, range, and charging speeds. The EV6 has two battery size options, 58 kWh is the standard size for the entry level Light (RWD) trim. All other trims, in either RWD or AWD form get a larger 77.4 kWh battery. According to Kia, the maximum estimated range for the larger battery is 310 miles, and 232 miles for the smaller one. Maximum charging speeds for the EV6 are up to 11.5 kW for all trims for AC level 2 240V charging, the type we might do at home in the garage. Note, that even though the EV6 can charge at better than 11kW, it can only do so on 3 phase wiring which isn’t commonly used in U.S. residential homes, but may be available at public, commercial level 2 charging stations. As such 7.4 kW at 32 amps is likely the maximum charge rates owners will see at home, if their electrical supply and charger supports it (note that the EV6 does not come with its own charging unit). Assuming your home charger can provide that level of charge, this translates into a best case recharge time of nearly 12 hours if charging from near empty to 100% full (or about 19 miles of driving range added per hour) for the smaller battery, or about 16 hours for the larger battery. For level 3 DC “fast charging”, all trims of the EV6 are equipped with an 800V battery system, which allows up to 250 kW charging speeds via a CCS connector.

The Ariya on the other hand has either a 66 kWh or 91 kWh battery and is capable of charging at up to 22 kW on AC, level 2 240V charging, though this may only matter when charging outside of one’s home since the Ariya requires a 3 phase, 32 amp electrical connection to charge at 22 kW AC. This is impressive, regardless, but may be of little inspiration to U.S. customers. Likely, the Ariya will also have a maximum “at home” charging speed of 7.4 kW at 32 amps on 240V single phase wiring in the U.S. market, which translates into a recharge time (from near empty to full) of about 14 hours according to Electric Vehicle Database.org, though actual charging times will vary of course based on the electrical supply. When using level 3 DC fast charging, the Ariya only has 130 kW DC fast charging, which isn’t particularly fast, though perhaps adequate for the task and translates to a, best case, estimated 35 minute 10-80% recharge time on a 150kW capable level 3 CCS charger. It is worth noting that 50kW CCS chargers are presently more common in many areas around the U.S. A 50kW charger would charge both vehicles much slower and would more than double the time it would take to get a 10-80% charge. Thus, the EV6 soundly beats the Ariya on level 3 charging capability and times and is functionally the same on level 2 charging (unless you happen to live in a place where you have the option of charging your vehicle on 3 phase, 32 amp level 2 charging). The faster level 3 DC charging capability is likely only to matter on road trips for the average driver unless you are completely dependent on public EV charging and have no means of charging at home.

There are many other factors that those shopping for an EV may consider when comparing models like these, and when the Ariya goes on sale I’ll review more of them, however price and (predicted) availability are certainly two of the most important that customers will consider. The Ariya’s prices range from $45,950 to $58,950 before options, rebates or incentives according to Nissan. The EV6 currently ranges from $40,900 to $55,900 before options, rebates or incentives according to Kia, which means the EV6 should have a pricing advantage, depending. Worth noting is that Nissan is likely to begin losing its federal tax incentive not long after the Ariya goes on sale, which will translate into a significant pricing advantage (of about $10,000 or more, depending) for Kia in the coming year, if Nissan doesn’t lower its prices or new incentives are made available. Given that situation, and the fact that Nissan has had difficulty bringing the Ariya to production and delayed its release multiple times due to supply chain constraints, I predict that Ariyas will be harder to come by and will likely sell in far lower numbers at least until competing EV brands (like Kia) lose their federal tax incentives too.

What do you think? Would you pay more for the Nissan? Would you prefer the EV6 for reasons other than its faster level 3 charging? What else would you like to see, comparison wise? Please leave your comments and questions below.

Images provided by Kia and Nissan.

David Radzieta wrote on May 31, 2022 - 10:32pm Permalink
The Hyundai does look good but seems to be having a lot of issues in the Facebook group. Lets hope they get it worked out. Both cars are very stylish. I would personally go with the Ariya. Proven Envision battery technology. The Ariya NMC811 battery with graphene anodes might be the first 4 million mile battery.
Justin Hart wrote on June 1, 2022 - 8:30pm Permalink
4 million miles would be amazing, and certainly much improved over Nissan’s earlier batteries (speaking of the capacity loss issues first generation Nissan LEAF’s had, and which I experienced as the owner of a first gen 2011 model). Just curious, besides a recall or two, I haven’t heard about too many or issues with the Kia EV6. Do you know what issues people are reporting with it on Facebook?