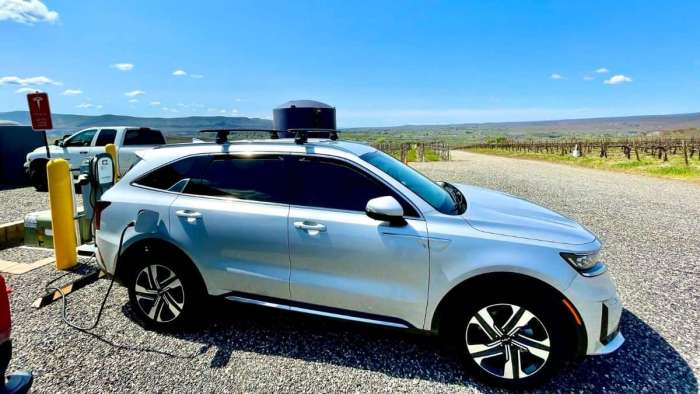 Before you buy a plug-in vehicle, it’s probably worth doing some research into where, besides your own home or perhaps your workplace, you can recharge your vehicle. Frankly, to not do so is somewhat reckless, since there are a number of regions in the country where your options for public charging may be limited.
Advertisement

As the New York Times recently shared, most people who buy plug-in vehicles will be charging them at their homes. But more than 30% of Americans live in multifamily dwellings (apartments, condos, townhomes and mixed use buildings), most of which are lacking or limited in the availability of car charging infrastructure. Many of those living in multifamily dwellings will either need to look for public car charging or workplace charging if they are going to permanently make the switch to electric vehicles. This is why it is so important that we increase the availability of public car charging infrastructure.

But even if one has a place to charge at home, there’s a reasonable chance one could eventually find themselves in a region where public charging resources are scarce, or even nonexistent. These places are casually referred to as “charging deserts” since they are barren of all, or most, public options for charging a plug-in vehicle.

In or around charging deserts, an all electric vehicle could be difficult to use, if you don’t have a charging option at home. Even if you do, unless you never plan on driving (one way) beyond about 50% of the range of a full charge, you are bound to need access to public car charging options. In such places, you could be better of choosing a hybrid or plug-in hybrid, until the charging infrastructure needed becomes available

Where are these deserts anyway and how big are they? They can be large (hundreds of miles across) or smaller (just dozens of miles across); their size is actually defined by the electric range of the vehicles in question and their proximity to the next nearest charging infrastructure. For example, if an electric vehicle only has a 150 mile maximum range, or less, any distance between chargers greater than about the maximum range of a full charge would be considered “desert”.

But if your electric vehicle has a 400+ mile range, deserts may be more rare but they are significantly larger. Using the PlugShare app I looked at fast charging networks for Tesla (the best selling EV brand in the U.S.) and the CCS network (the high speed charger format that most non-Tesla vehicles use) and saw multiple places that could be considered charging deserts.

Since I can’t really detail all of them in the space of one article, I will pick two as examples: the Inland Pacific Northwest, stretching from the middle of Washington State and Oregon into Western Idaho, and Western Texas to Eastern New Mexico. It just so happens that all these areas are also literal deserts, but that’s just a coincidence. Here’s what those regions look like for both Tesla and CCS chargers (the orange dots being individual fast charging, direct current) stations: 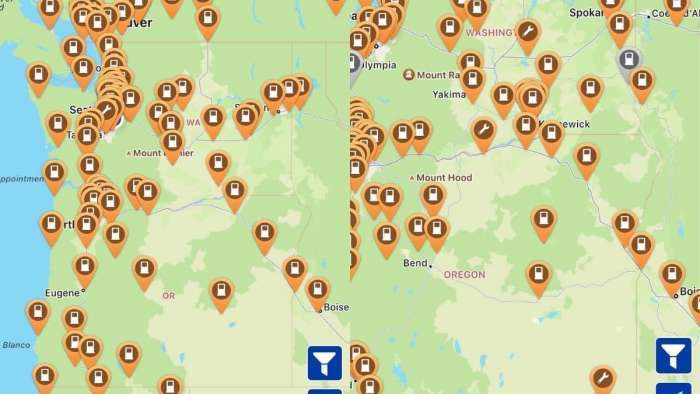 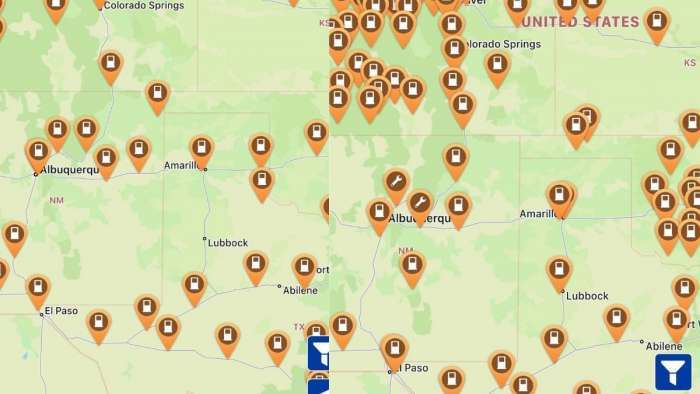 In the inland Pacific Northwest for example, if you wanted to drive a Tesla EV from Medford, OR to Burns, OR, a distance of over 284 miles via the shortest route, you could make it in the longest range versions they sell, assuming getting over the hills and mountains in between didn’t sap too much of your range. But in a “Standard Range” Tesla vehicle, or even some of its “Long Range” Model 3 and Model Y EVs depending on weather, wind, weight and so on, the trip could be impossible or take longer than one would find acceptable since there are few if any fast charging options along the route. Granted, there are several slower speed 240V charging options between these destinations, but getting charged up at one of these would take hours.

In a different brand of EV that uses the CCS charging standard, the Ford Mach-E or the Kia EV6 for example, the situation is actually worse because there vehicles don’t offer as much range as the extended range versions of Tesla’s vehicles and the fast charging equipment in this region is actually far less capable of delivering charge back to the vehicles (they are much slower and fewer in number).

In West Texas and Eastern New Mexico, a trip from somewhere in the vicinity of Lubbock, TX to Roswell, NM or perhaps further west to the Lincoln National Forest or Alamogordo, NM is a trip of around 200 miles or more. It is doable by taking a much longer route in either a Tesla or other longer range EV, but it will be significantly longer either due to the extra distance to be driven or the slow speed at which you’ll end up charging at, regardless.

So what should you do if you live in or near a charging desert? One, do your research. Enough people have already failed to do this, purchased an EV and ended up selling it because they can’t make the charging situation work. Two, consider your options; you could buy a plug-in hybrid (possibly an excellent choice if you can charge at home every day even if you can’t charge anywhere else) or a regular hybrid which never has to be plugged in, or you could move, change jobs, try and get by without a car or use other means of transportation if your goal is to lower your consumption of oil and natural resources. Got questions about what might suit your situation better? Please feel free to leave your questions or comments below.