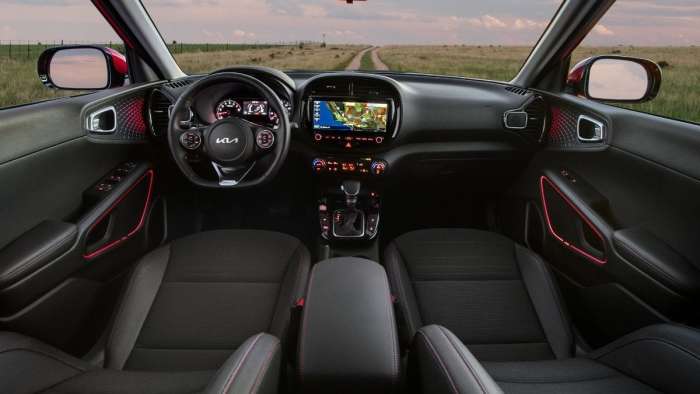 2022 Kia Soul Review: The Choice Is Still Yours

I have decided to review the Kia Soul because I have always been a fan of small, sporty (or quirky) and practical wagons and wagon-like vehicles. Perhaps that is because my first car, a Datsun 710 station wagon which was about as sporty as a raging case of athlete’s foot, imprinted something on me. I later owned a pair of late 1980’s Honda Civic wagons (with mad AWD capability!), a 2007 Honda Fit, a 2011 Nissan LEAF, and I still have a PT Cruiser Hot Wheels. One of those statements is totally false by the way.
Advertisement

Or maybe I am a freak, or I just really like hamsters (they are pretty freaking cool when you think about it). They make convincing spokescritters, if you ask me. Speaking of critique, the Soul has, once again, won a Car and Driver Editors Choice Award for 2022, and it remains a quirky, spacious, practical and peppy compact SUV, in the Turbo option at least. It’s even fairly efficient, considering it’s rolling cinder block silhouette. While the U.S. no longer gets the EV version of the Soul, it isn’t out of the question that some form of electrified Soul might show up at some point in the next few years (my guess would be an HEV version, if any), perhaps sharing motivation with the Niro HEV or a possible Seltos HEV. Re-electrifying the Soul would certainly give its green bonafides a welcome jolt. 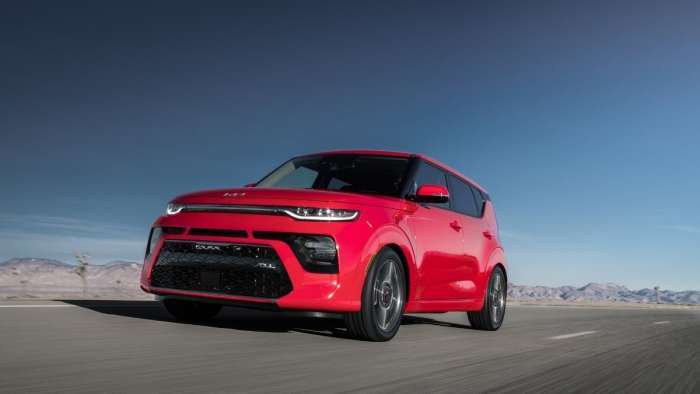 But what’s it like to drive the Soul? According to a handful of reviews, the Soul has “impressive power output… [and also] lack of power”, which isn’t confusing at all, but may just be the result of the schism between its two powertrain options (a base 147-hp 2.0-liter four-cylinder, and a 201-hp turbo 1.6-liter four-cylinder). Motortrend says the 2022 Soul is “poised in corners and over uneven surfaces, steering is accurate… and it doesn’t feel underpowered”. Car and Driver says the base engine “feels peppy around town”, and a few years ago even advised purchasing that option over the more powerful turbo (unusual given C&D’s performance proclivities). Back then, C&D also said its steering was disappointing due to its “numb and strongly boosted” character, but mentioned nothing of the sort for 2022, and given other reviews of the 2022 Soul, it would seem that, at least in the Sport mode setting, Kia has addressed this.

The Soul’s relative power, and competent handling (not to mention it’s attractive interior), all but eradicate my memory of driving that old Datsun 710 station wagon. It was kind of like hooning a thrashed Big Wheel with one bent handle and a missing pedal, only the hooning wasn’t on purpose. It was just the way the thing drove! Otherwise, the recently departed Honda Fit is actually the closest car I can compare the Kia Soul to, with similar interior practicality, handling, and a feeling of nimbleness (if not due to steering and corner hugging, then its proportions and lightweight feel). However, the Soul has more power and the Fit has better, tighter and more sporty steering.

While the Soul may not be worthy of an epic poem to describe the glory of its engine and the crispness of its handling, it’s worthy of more verses than those lip synced by adorable little hamsters all those years ago. A haiku? A limerick perhaps? There once was a car full of charm… Yes. Something like that. The Soul is quite aptly named because it feels good to drive. It has enough connection to the road, enough airiness inside to stretch out in, to haul a good amount of stuff in, to play or adventure in. Its performance and steering feel aren’t distractions. They just feel right, as they are. Yes. The Soul, it feels right. It feels familiar and fun. It feels like it's part of you.

DailyDose wrote on March 5, 2022 - 1:54pm Permalink
I love the Soul and likewise like quirky wagons. But the exterior of the latest Soul is just so ugly. They got the 2017 Exclaim perfect. Right amount of quirky and sporty.
Justin Hart wrote on March 6, 2022 - 9:16pm Permalink
Here’s to quirky! May Kia not forget about it and bring it back, soon!
Jeremiah wrote on March 7, 2022 - 1:01pm Permalink
Hopefully better than the 2020 soul Transmission went out after 51000 miles I doubt I'll ever buy another kia product
JustinHart wrote on March 10, 2022 - 2:54am Permalink
Yikes! I assume it was covered under warranty at least? Sorry that happened to you and I wonder if how often the Soul models have transmission failure... I hope it was either fixed and will last a very long time, or that your next vehicle is more reliable.
Joanna Felvus wrote on March 10, 2022 - 2:36pm Permalink
I have a 2 Kia souls a 2012 and a 2018. The 2012 started having electric issues at 97000 miles and the 2018 the engine went at 63000 miles and KIA will not honor their 100000 mile warranty
Justin Hart wrote on March 12, 2022 - 3:52am Permalink
That is not good! Did they give you any justification for not honoring the warranty? The 2018’s engine should be covered under age and mileage... was it perhaps something they claimed wasn’t “honored” (like maintenance not followed or something like that)? Sorry that is happening to you.