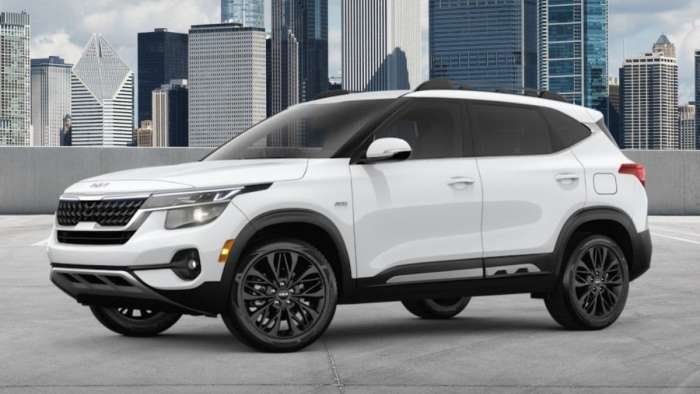 Kia Electrified: Seltos HEV may be in the works, for some markets at least

Kia aims to significantly increase the production and sale of electrified vehicles in the coming year. Electrifying more of its best selling vehicles is the surest way to accomplish this goal, but for U.S. model year 2021 Kia only offered one of its five best sellers with an electrified option (the Sorento Hybrid). This begs the question: which Kia vehicles sold in the U.S. are most likely to be electrified in the next few years?
Advertisement

In a previous article I have speculated about a possible HEV Telluride (Kia’s 4th best selling vehicle in the U.S. in 2021, to date). I have also written multiple articles about Kia’s newest electrified vehicle, on sale in the U.S. since September, the 2022 Sorento plug-in hybrid. Of course next year will see the 2022 all electric EV6 go on sale in the U.S. and the 2023 Sportage HEV as well. Let’s not forget that Kia also sells hybrid, plug-in hybrid, and full electric versions of the Niro, which has seen a 49% increase in sales in 2021 according to Kia. However, the Niro is one of the lowest volume Kia’s in the U.S. market (in 9th place), and hopefully its 2023 redesign will help improve those numbers. But there’s another small (subcompact) utility vehicle that Kia sells in the U.S. at about twice the volume of the Niro that may also soon have an electrified option.

According to The Korean Car Blog, Kia will be developing a new hybrid (HEV) variant of its popular Seltos subcompact SUV for its mid-cycle facelift. If true and if the Seltos HEV is destined for the U.S. market, that would likely mean we wouldn’t see it before the 2023 model year, at the soonest. Apparently the hybrid powertrain may even be the same one used in the Niro, and with the Niro redesign launching next year too, it might be a relatively easy way for Kia to expand its lineup and market share by releasing an electrified Seltos in roughly the same timeframe. It could just as easily be a later model year though, given the supply chain issues facing the world these days. What are the odds a hybrid Seltos model makes it to the U.S. though?

I think the odds are good, but it depends on many factors, supply of batteries and or other components in particular. The only other reasons I can think Kia might withhold or postpone release of a Seltos HEV might be to avoid cannibalizing sales of the Niro model line in the U.S. and or if Kia plans to focus electrification on different U.S. market vehicles in order to hit fleet emissions targets or increase sales. Technically, Kia sells more Fortes, K5s, and Souls in the U.S. than it does of the Seltos. Thus, it is possible Kia may choose to focus on one or more of these other models for hybridization, especially since Hyundai offers both its Elantra and Sonata in hybrid form; it isn’t much of a stretch to envision Kia offering a hybrid version of one or more of its sedans, too.

What do you think? Would a sub-compact SUV like the Seltos be a hot seller for Kia? There isn’t too much out there in terms of competition, in the U.S., at present. If the Seltos HEV might be a more capable off-road vehicle than the Niro (via better ground clearance and or AWD), it could be an excellent value play on Kia’s part. Leave us your thoughts and comments below.