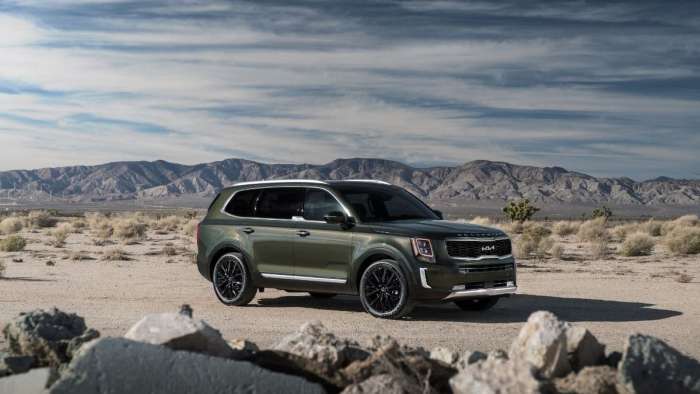 Kia, and its sister company Hyundai, are poised to be among the top market share holders in the U.S. electrified passenger vehicle market in 2022 and beyond. Right now, the Kia Telluride SUV is one of the best selling Kia models, but it has no electrified versions on offer. Might we expect some form of electrified Kia Telluride in the next year or two?
Advertisement

The Telluride is the 4th best selling Kia model, year to date, on the market in the U.S. Let’s think through, and then speculate a little about, what might be more likely for the Telluride in the next few model years. To be perfectly clear this is all speculation, I have no inside information or sources, and am just doing basic analysis of previously published information, market trends, etc. to come up with some hopefully thought provoking information.

First, why would Kia electrify the Telluride? The answer is simple, to help increase their fleet average fuel economy as the Telluride is one of the least fuel efficient Kias one can buy in the U.S., currently. According to Cars.com, Kia’s current fleet average fuel economy is 28.1 mpg. That means they are the 4th best, if we exclude Tesla which only makes electric vehicles and as such has by far the highest efficiency of any maker, behind Honda/Acura, Hyundai and Subaru. This is pretty good considering the difference between Kia and the most fuel efficient maker besides Tesla, Honda/Acura, is only .8 mpg.

Electrifying the Telluride, and or their other less fuel efficient vehicles, will help Kia maintain a front runner position in fuel efficiency. They may also attract additional customers that want a larger SUV, but that also value fuel efficiency.

Would Kia be more likely to make an HEV (non plug-in hybrid), PHEV (plug-in hybrid) or EV (electric) Telluride? Since Kia recently debuted the EV9 EV, which is of similar size and capability as the Telluride but on a different platform, and because the Telluride is a hot selling SUV only recently introduced, it seems unlikely that Kia would make an EV version of the Telluride. According to Inside EVs, Kia is also expected to decrease the number of PHEVs it makes and sells sometime after 2023, which decreases the likelihood that a Telluride PHEV would be offered, too.

Every automaker has to confront the reality that battery supply will be limited, despite significant increases in production, for the remainder of the decade and HEVs are the lowest cost/highest volume means of improving fuel efficiency. As such, an HEV Telluride seems the most likely electrified option Kia will offer at some point in the near future. It could get the Telluride close to 30 mpg, depending, and that may reach a different section of the market, long haul highway drivers in more rural areas and or those with greater price sensitivity, than plug-in options would.

But why wouldn’t Kia electrify the Telluride? The answers may be numerous, but limited battery supply, extra cost, and possible efficiency gains using smaller engines, lighter weight, and aerodynamic improvements are a few. Certainly, Kia does market research and has some level of understanding regarding who buys their vehicles.

If research tells them they aren’t likely to increase sales by adding an electrified option to the Telluride line, they may decide to focus their electrification options on their smaller SUVs. That could mean the Telluride may never be electrified. But if Kia doesn’t electrify it at some point, and an EV9 rolls out later this decade, Kia may wind up hurting its Telluride sales since, undoubtedly, some potential buyers of the Telluride will favor the performance, ecological or otherwise, of a 7+ passenger EV. Given the direction we are headed with fleet average fuel economy goals (driven not just by the U.S. market’s requirements, but globally), all vehicle lines will likely need some form of electrification by the later half of the decade, regardless.

As such, I would not be surprised if there is an HEV Telluride option by model year 2025 at the latest.