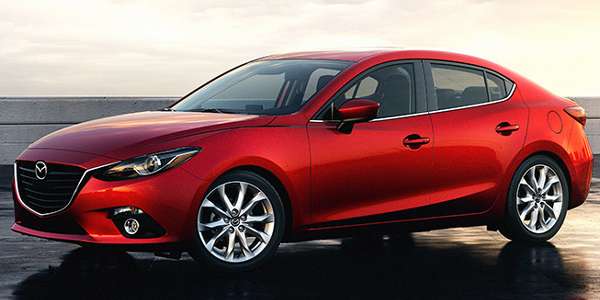 Consumer Reports' preliminary writeup of the Mazda3 is positive but short of glowing.
Advertisement

The Mazda3 has been winning effusive praise from nearly every camp. Most reviewers have called the 2014-model redesign of Mazda's compact car a premium-caliber sports sedan at an economy car price tag, praising it for both its fun-to-drive character and its relatively high level of luxury. It's won a flurry of recent awards.

But in a recent first drive review, Consumer Reports magazine has found more fault with the new 2014 Mazda3. That's not to say that CR is criticizing it -- not hardly. But there's not the same glowing adoration that characterized other recent Mazda3 reviews.

The Mazda3 is bumpy over rough roads, writes Consumer Reports. The high-end infotainment system, perched atop the dash, can be confusing to use and looks tacked on. Rear visibility isn't great.

Okay, okay, Mazda fans might be saying. So what? As long as it drives well. But Consumer Reports isn't brimming with praise there, either, complaining that the automatic transmission downshifts slowly at the electric power steering has less feedback than past Mazda3s. Ouch.

That said, the magazine still had nice things to say about the Mazda3. It praised the car for agile handling, a slick manual transmission, improved noise suppression and rear seat room, and comfortable front seats.

"We’ve been fans of the Mazda3 for ages, impressed with its agile handling, good ride, and excellent fuel economy," it writes. "The redesign, available as either a sedan or hatchback, continues this tradition. It is a little larger and roomier, more stylish, and brings tons of new technology."

But with all of the niggling complaints holding it back, it will be tough for Mazda to nab the top rating among small cars. Consumer Reports already favored the Subaru Impreza, Kia Forte, and Hyundai Elantra over the previous-generation Mazda3.

Consumer Reports will issue its full review of the Mazda3 after spending a few months with the two test cars that it purchased itself for the purpose -- cars off the lot, rather than high-end models specially prepped for journalists. While the review is likely to be positive, Mazda can't get its hopes up for the same sort of adulation it's gotten from some other reviewers.

That matches the pattern Consumer Reports followed with the latest new Mazdas, the Mazda6 midsize sedan and CX-5 compact crossover. Both were judged to be competitive but not class-leading.

Darin wrote on December 2, 2013 - 12:25pm Permalink
Typical CR Toyota Honda payola too bad these brands aren't held to these standards - the nit pick list I could make about civics and corollas would fill pages- attention sheeple -keep driving non mazda products so I can have style, superior driving dynamics an exclusivity - keep buying the junk your dad tells you is good