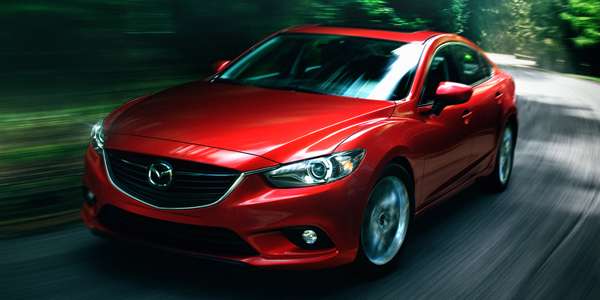 Mazdas get another flurry of awards

The Mazda3 and Mazda6 are both award-winners.
Advertisement

That hasn't always translated into great market share for Mazda, because popular virtues like plush comfort and roominess are often at odds with this brand's sporty niche. But it does mean that Mazdas win a lot of industry awards. And so many have popped up in recent days that it's almost too hard to keep track of them all.

But here's a roundup of recent wins from two all-new 2014 Mazdas -- the redesigned Mazda3 compact economy car and the Mazda6 midsize family sedan:

Car and Driver 10Best: Mazda3 and Mazda6
"Everywhere you look, selling out seems like the future," the magazine states in a YouTube video. "And then this happens. It's heartwarming how great the 3 is." Of the Mazda6, Car and Driver says: "The 6 not only looks like a million bucks inside and out, it drives like it." Sadly, the Mazda MX-5 Miata lost its eight-year position as one of Car and Driver's top-10 faves -- this truly unique and special automobile should have been kept on the list, even if it meant having to choose between Mazda's two mainstream knockouts.

Popular Mechanics Car of the Year: Mazda6
"Mazda engineers set out to make a truly great car and succeeded," the magazine wrote. It praised Mazda's newly redesigned midsize sedan for its balance of ride and handling, for its roomy and well-finished interior, and for its outstanding fuel economy. "This, from a company about one-eighth the size of General Motors."

Motor Press Guild Innovation Vehicle of the Year: Mazda3
The guild focused its praise on Mazda's SKYACTIV fuel-efficiency techniques in naming the Mazda3 the winner among cars below $29,0000. "This umbrella of advanced technologies focuses on increasing overall vehicle efficiency, through lightweight materials and improved design, while increasing responsiveness," John Dinkel, chair of the Innovation Vehicle of the Year committee, said in a press release. "SKYACTIV takes us down a path of a future of highly efficient yet fun-to-drive affordable cars."

Automobile of the Year nominee: Mazda3
Automobile magazine said the Mazda3 is "at the top of the compact heap." Though it ultimately lost to the Chevrolet Corvette Stingray, its nomination placed it among elite company. “It drives with personality, yet it’s more significant for its ability to offer the latest active-safety devices and an outstanding level of luxury at an affordable price,” Automobile wrote.

Hispanic Motor Press Award recipients: Mazda3, Mazda6
"Mazda continues to impress, incorporating the SKYACTIV TECHNOLOGY approach to these two cars, the Mazda3 and Mazda6, which are agile and comfortable while maintaining the mechanical reliability the brand is known for," said Ricardo Rodriguez-Long, according to a Mazda press release. The Mazda3 and Mazda6 were each judged to be the best choice in their respective classes.

Road & Track's Best Cars: Mazda3, Mazda6
The magazine praised both new 2014 Mazdas, judging each to be best in their respective classes. "Seriously, does Mazda make any bad cars? There isn't one that's not well-built, affordable, and fun to drive," it wrote. Of the Mazda6: "This car is as close to perfect as you can get for the money. The steering and chassis make the class-leading Toyota Camry feel like a dead fish; the Accord, a dead fish with an ego problem." Of the Mazda3: "You can drive it all day with a grin on your face. And you'll want to."

Automotive Lease Guide Residual Value Award: Mazda3
With a predicted resale value of 58 percent of its original sticker price after three years, the Mazda3 is projected to be more desirable to secondhand buyers than any other compact car.

Not enough awards? Not to worry -- Mazda's flashy, fun and fuel-efficient 2014s will likely to continue to attract well-deserved attention.