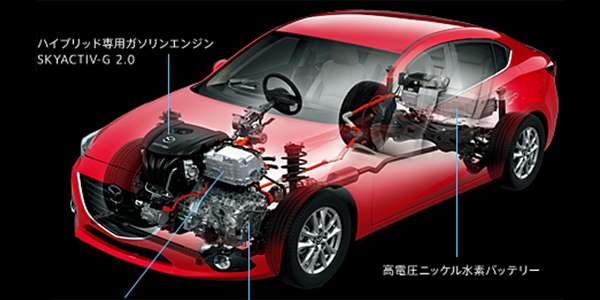 Mazda3 hybrid will get more than 50 mpg, but sadly won't be sold in U.S.

Mazda has unveiled a Japan-only hybrid version of the Mazda3 compact car, despite its apparent U.S.-market potential.
Advertisement

Hybrids remain a niche market in the U.S., but a growing number of carmakers are launching gas-electric versions of their cars. Sadly, though, Mazda apparently doesn't want to be one of them.

The company has just unveiled a Prius-beating fuel-efficient hybrid version of the Mazda3 compact car at the Tokyo Motor Show, but won't sell this car in the United States at any point in the immediate future.

Running a mathematical correction, that would give a very rough estimate that the Mazda3 hybrid would get 55 miles per gallon in U.S. EPA testing. For another metric, it edges out the best-selling Toyota Prius in the Japanese test (the Prius is rated for the equivalent of 71 mpg in that test); the Prius has an EPA rating of 50 miles per gallon.

The Japanese market, where fuel costs are higher and small cars are more popular than here, is perhaps a better fit for a new hybrid than the U.S. But Mazda's SKYACTIV fuel-saving technology is getting a lot of attention here, and a fuel-efficiency flagship would fit beautifully into that line.

Mazda has some limited experience selling hybrids -- the Tribute SUV, a mechanical twin to the Ford Escape, was sold with the Ford-developed hybrid mechanicals from 2005 to 2009. But this Mazda3 was developed by Mazda itself.

Fortunately, even American Mazdas have had excellent fuel-saving technologies lately. SKYACTIV saves on gas without the complexity of electric motors -- the Mazda3, Mazda6 and Mazda CX-5 all have EPA ratings at or near the tops of their respective classes, without needing to sacrifice power either. And a diesel-powered Mazda6 is due in the U.S. in spring 2014.

But hopefully Mazda recognizes the value of selling a hybrid in the U.S. and corrects this omission before Toyota or another competitor has a chance to raise the standard.

See other Mazda coverage from Torque News. Recent articles discuss a flurry of awards for the Mazda3 and Mazda6, and a diesel-powered racecar.