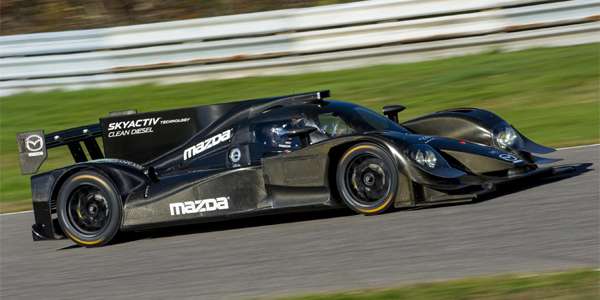 Mazda will enter two racecars in the 2014 USCC that feature modified versions of its stock diesel engine.
Advertisement

If you're like me, you don't pay much attention to auto racing. But Mazda's latest initiative is a reason to pay attention. The company's entries to the 2014 TUDOR United SportsCar Championship include two racecars featuring modified versions of Mazda's production-grade diesel engine, according to a Nov. 14 announcement.

Despite a growing number of diesels available in the U.S. market, this type of engine retains a niche status. In part, many consumers are turned off by unfair images of clattering old European cars or smoke-belching trucks. Other more valid concerns include a higher purchase price, higher fuel costs and comparatively skimpy availability of diesel fuel.

But as Mazda prepares to bring a diesel version of the Mazda6 midsize sedan to the U.S. in spring 2014, the engine's racing abilities could be an invaluable selling point to the company's traditionally sportiness-minded customer base. Even among their proponents, modern diesels are better known for their fuel efficiency than their performance; the typical Mazda buyer will expect both.

The Mazda6 engine's specs haven't been finalized for the U.S. market, but in Europe -- where diesels are the norm -- the engine is good for 173 horsepower and 310 lb-ft of torque. Modern diesels' low-end torque means performance is strong off the line, and the Mazda6 has it in spades. The only competing diesel midsize sedan in the U.S. market -- the Volkswagen Passat TDI -- has 140 horsepower and 236 lb-ft of torque.

"Shove is available right off idle, and the diesel pulls strongly to its redline," Car and Driver magazine wrote in a glowing review of a European-spec Mazda6 diesel. "Only in the quietest moments are strains of clatter or injector tick audible; at speed on the highway, the diesel is indistinguishable from its petrol-swilling sibling."

Fuel economy estimates are unavailable because European tests are not comparable to those in the U.S., but diesels typically provide a substantial improvement over cars running on regular unleaded.

Existing diesels have also developed a reputation for longevity, which Mazda will also -- hopefully -- help to demonstrate with its racecars. The "SKYACTIV-D Prototype Racers" do have modified engines for racing duty, but Mazda says they are 51 percent stock by parts count and 63 percent stock by weight. "Mazda chose this path as it is the most honest way to demonstrate the performance, quality, durability, and reliability of Mazda powerplants," a company press release states.

How well American buyers respond to the diesel Mazda6 will remain to be seen. But Mazda has said that a success would mean broader diesel availability across the vehicle line -- most likely meaning the Mazda3 compact car and CX-5 compact crossover, which are already sold around the world with diesel engines.

Demonstrating the engine's ability on a racetrack is a great way to boost the reputation of diesels in general and Mazda's diesels in particular.

The SKYACTIV-D Prototype Racers will debut Jan. 3-5 in an event previewing the Rolex 24 at Daytona race. That race will be held Jan. 25-26. No competitor is expected to field a diesel.