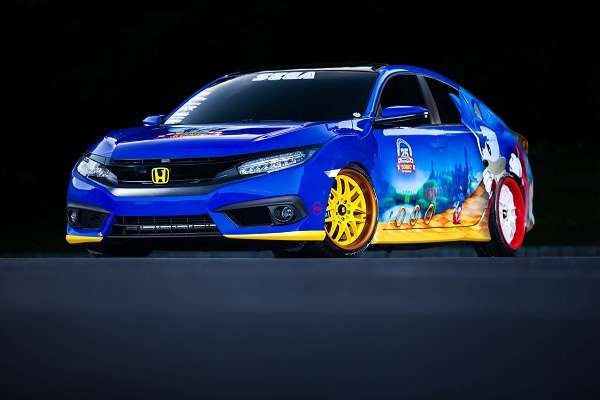 This weekend, San Diego, California was home to Comic-Con 2016, Civic was there, and slightly modified in celebration of a very angry, somewhat ballistic hedgehog.
Advertisement

Personally, I’ve always found “Sonic the Hedgehog,” to be just a tad abrasive, obnoxious and over the top -- with a measurable attitude that puts other digitally generated, superpower humanoids to shame; he also has his own game, cartoon series and several million fans, and then rolls in the best selling compact car in North America.

According to our friends at American Honda Motors: To celebrate the legendary video game character, "Sonic the Hedgehog™," SEGA® has tapped Honda and its number one selling car in America, the Civic, to create a one-of-a-kind Sonic Civic, as the beloved game commemorates its 25th year. The custom Sonic Civic, based on a turbocharged 2016 Civic Touring Sedan, will make its debut tonight during Comic-Con at SEGA's sold-out Sonic the Hedgehog 25th Anniversary event at the House of Blues in San Diego.

"What better way to showcase the incredibly sporty performance capability of the 10th generation Civic than by pairing it with gaming industry's ultimate athlete – Sonic the Hedgehog," said James Jenkins, Public Relations Manager for the Honda Division. "As the fan favorite game and character celebrates his 25th anniversary on the scene, we hope that all Sonic fans – those who remember playing years ago and those who continue playing today – rejoice in his all-new ride, as much as we enjoyed creating it." We first met 2016 Honda Civic Coupe in San Diego at the Hard Rock Cafe. While attending Honda Coupe’s press reveal, I ventured across the street to the San Diego bayfront convention center and soon learned of plans to double the size of the multiple block long facility to accommodate future Comic-Con events -- it’s huge! The lightly modified Sega ™ Sonic Civic is sure to be a crowed pleaser. Read my latest Honda Civic review here.