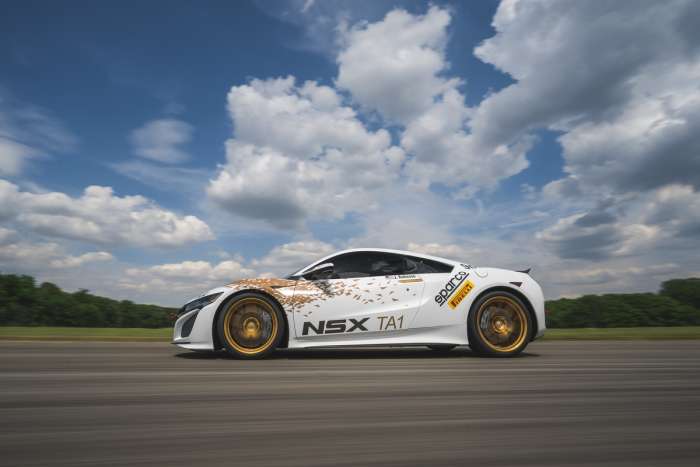 In 2015 Acura fans watched a prototype 2017 Acura NSX supercar pacing the start of the Broadmoor Pikes Peak Hill Climb Classic. For the 100th anniversary of the oldest hillclimb in the U.S., Honda R&D and the Acura Brand takes off all the stops.
Advertisement

As shared with me by Sage and Honda R&D, the NSX was still in final development, and although looking “awesome,” as Torque News friend Hondapro Jason like to say, had a glitch or two.

None the less the factory stock specification NSX made it to the clouds and looked good doing so. I’ve since had the opportunity to experience the only supercar developed and built in the the U.S. on the track and street -- and to understate the experience just a tad, love it!

If memory serves correct: Last year one of only 4 NSX prototypes driving the highways and byways of North America was specially painted and (mildly)race prepared for the “race to the clouds,” then driven to the summit -- in what was arguably a commendable run for a vehicle still in final development testing -- this made for some interesting promotion, and was featured in one of Acura’s first social media exclusive video snippets, as well as this Torque New article.

* As Official Pace Car sponsor, Acura will feature three pace cars – the NSX, the seven-passenger MDX performance-luxury SUV and the TLX sports sedan. President of Polyphony Digital and Producer of the Gran Turismo series Kazunori Yamauchi and Pikes Peak legends Randy Schranz and Leonard Vahsholtz will lead the field of 100 entrants to the top of the 14,115-foot Colorado peak.
For Pikes Peak race attendees, the NSX and other pace cars will appear at a number of pre-race activities, including the popular Fan Fest in downtown Colorado Springs, 5 to 10 p.m. MDT Friday, June 24.

As to 2017 Acura NSX:The NSX competing in the Time Attack 2 class is a production car with the required safety equipment for competition. The Time Attack 1 NSX will be driven by James Robinson of the company's North American powertrain development group, who drove a first-generation NSX in the Pikes Peak Hill Climb from 2012 to 2015. His brother Nick Robinson, an engineer in charge of the new NSX's dynamic performance during its development, will drive the Time Attack 2 NSX. Nick is also the reigning PP250 winner from the 2015 Pikes Peak Hill Climb.

The supercar-inspired 4-Motor EV Concept will be driven by Tetsuya Yamano, who campaigned last year's CR-Z-based electric prototype. The EV Concept is the ultimate embodiment of the all-wheel-drive Electric SH-AWD powertrain featuring a world's first technology that enables four-wheel independent torque allocation. The Electric SH-AWD powertrain, an evolution of the CR-Z prototype powertrain, produces three times the total system output of last year's electric prototype and is mated to the NSX body.