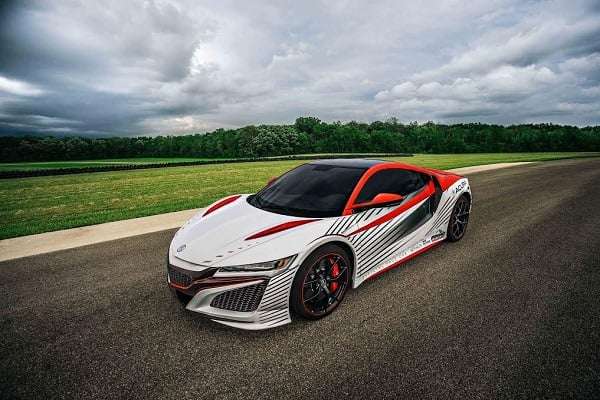 Once again Honda is co-sponsoring the Broadmoor Pikes Peak International Hill Climb. For 2015, Acura’s pulling out all stops and releasing something highly anticipated by fans worldwide.
Advertisement

In 2014 Torque News reported on Team Honda and the independent Honda powered team assault on the world’s most famous hill climb. Some of our favorites won, some didn’t, but all associated with Honda made a grand effort in taking on the toughest 12.4 miles in motorsports.

Months in the planning, weeks in duration, the 93rd running of Pikes Peak will be a race of several firsts, and one of those first, prior to the early morning run to the top belongs to Acura and a friend or two of mine.

Team Honda kicks it up a notch

For 2015, beyond providing Inflatable crash barriers and the support vehicles to transfer hundreds of support personal, rescue equipment and whatever else the race support effort calls for, Honda’s Acura Division will treat the world to a sample of the track-like handling and hybrid performance unique to 2016 Acura NSX.

Some old timers claim that the “Race to the Clouds” is not what it was back in the pre-pavement days. As a guy that ran the course on gravel, I say Not! Today, course speeds put a new spin on crazy-dangerous. Honda’s done what it can to reduce the race related danger to driver and spectator, that’s a good thing.

O.K., with that said: A car that I’ve been waiting for for the better part of a decade is scheduled to”Pace” 2015 pikes Peak IHC. Acura will be taking the dust covers off of what is arguably the most exciting engineering development in Acura’s 29 year history, and putting our friend Honda executive and Pikes Peak Hill Climb veteran, Sage Marie, behind the wheel of the car that will push Acura Division to the next level in serious sports car performance.

I’ll admit it, I’m just a bit jealous of Sage Marie. But he’s qualified to race 2016 Acura NSX to the clouds, and has put in his time in the race seat, and behind the desk, to earn the honor of doing so. Sage: I’m still looking for that promised Honda racing jacket…

All kidding aside, I’ve met very few people as dedicated to the Honda brand as Sage Marie, Congratulations!

2016 Acura NSX Sport Hybrid: A supercar like no other

Admittedly, you and I won’t witness the full potential of Acura’s twin turbocharged V6, 3 motored, 9 speed, dual clutch automated transmission, torque vectoring all-wheel drive(SH-AWD) supercar on Pikes Peak. In its capacity as official Hill Climb Pace Car, 2016 NSX will lead the start of a Hill Climb event featuring 140 contestants from across the globe. NSX will be moving fast, but won’t be going for a record challenge.(That we know of)

Honda Torque News covered the action in 2014, where Honda Fit EV took the production electric vehicle class win. Cool enough! But for me, the unlimited category is where the excitement comes into play. Yes, a vintage NSX ran in the class last year, as did Romain Dumas in a Honda powered open cockpit Norma M20 RD Limited for the win, and “Monster” Tajima of Japan taking the second spot in arguably the baddest electric performance vehicle on the planet.

There’s no other race event like Pikes Peak IHC in the world, and for 2015, Honda and Acura fans worldwide will have a 24 camera course-long view of the only production gasoline electric hybrid available to the driving public for less than $200,000 on the planet.

Acura senior vice president and general manager Mike Accavitti puts it this way: “The Acura NSX is the ultimate performance vehicle, and a novel way to promote its capabilities is the iconic race up Pikes Peak,” said Mike Accavitti, senior vice president and general manager of the Acura Division. “As the pace car, the beast that is NSX has yet to be fully let out of its cage, but fans and drivers will get a first glimpse of the unique character, performance and handling it will deliver in this one-of-a-kind racing environment.”

One of four Acura models to make the Pikes Peak run

Acura tells us that 2016 NSX will be one of four models making the run, including: ILX,TLX and a pre-generation NSX; should be a good day for Acura on the hill. Look for our coverage of Pikes Peak as well as Acura’s exclusive video coverage of NSX-Pikes-Peak here. Best of luck to Honda R&D, HPD, Honda, Acura, Mike, Sage, and the crew.